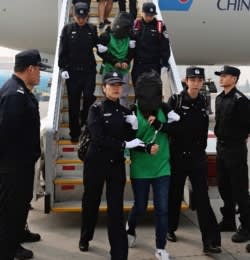 Taiwanese prisoners deported from Kenya are escorted off a plane in Beijing on April 13. (Xinhua/AP)

TAIPEI/BEIJING -- As Taiwan counts down to the inauguration of its new pro-independence president, cross-strait relations are looking increasingly strained.

Taiwan has shown interest in joining the China-led Asian Infrastructure Investment Bank. But on Tuesday, Deputy Finance Minister Wu Tang-chieh refused to accept a condition that Taiwan must apply under Beijing's supervision. "Taiwan would only apply for AIIB membership if we could do it with equality and dignity and not under China's umbrella," Wu said.

AIIB President Jin Liqun on April 7 had said Taiwan should apply for membership through the Chinese Ministry of Finance. This would be tantamount to signing on as part of China. Jin is a former Chinese vice finance minister.

Generally, international institutions like the United Nations do not allow Taiwan to join as a separate entity from China. An exception is the Asian Development Bank -- an international lender like the AIIB -- where Taiwan is registered as "Taipei, China."

In April last year, China rejected Taiwan as a founding member of the AIIB. But in November, at a China-Taiwan summit in Singapore, Chinese President Xi Jinping said he "would welcome Taiwan's participation through appropriate procedures."

An Fengshan, a spokesman for China's Taiwan Affairs Office, on Wednesday told reporters that the AIIB would "handle the issue of Taiwan's membership in light of the 'One China' principle and relevant AIIB rules." The contentious principle acknowledges that Taiwan is part of China, but leaves it up to each side to interpret what that means.

An's remarks, which echoed previous statements and did not nullify Jin's condition, were met with disappointment and anger in Taiwan.

Few believe Taiwan President Ma Ying-jeou, of the China-friendly Nationalist Party, will pave a path to AIIB membership before he leaves office on May 20. And it seems extremely unlikely that his successor, Tsai Ing-wen of the pro-independence Democratic Progressive Party, would accept Beijing's proviso.

At Wednesday's news conference, An also touched on another pressing cross-strait issue: The recent deportation of 45 Taiwanese prisoners from Kenya to mainland China. An said the individuals stole more than 6 million yuan ($925,000) in China by committing telephone fraud. "The victims are all residents of the mainland and the mainland should have jurisdiction over the case," he said.

Authorities in Taiwan have demanded the immediate return of the 45, but resolving the matter is likely to take time. In the meantime, China is cranking up the pressure before Tsai takes office.