APEC: Xi says China has no intention of 'decoupling' The meetings come just days after China and 14 other Asia-Pacific economies banded together to sign the Regional Comprehensive Economic Partnership trade deal -- and amid fresh concerns about new waves of COVID-19 around the world.

For more on what to expect throughout the APEC proceedings, read our 2020 primer. Here are the highlights of Xi's address and those of other speakers:

President Xi Jinping gives a 20-minute speech, vowing to continue opening up the country's market in order to create a driving force for global economic growth.

"We will not reverse course or run against the historical trend by decoupling, or forming a small circle to keep others out," Xi says. 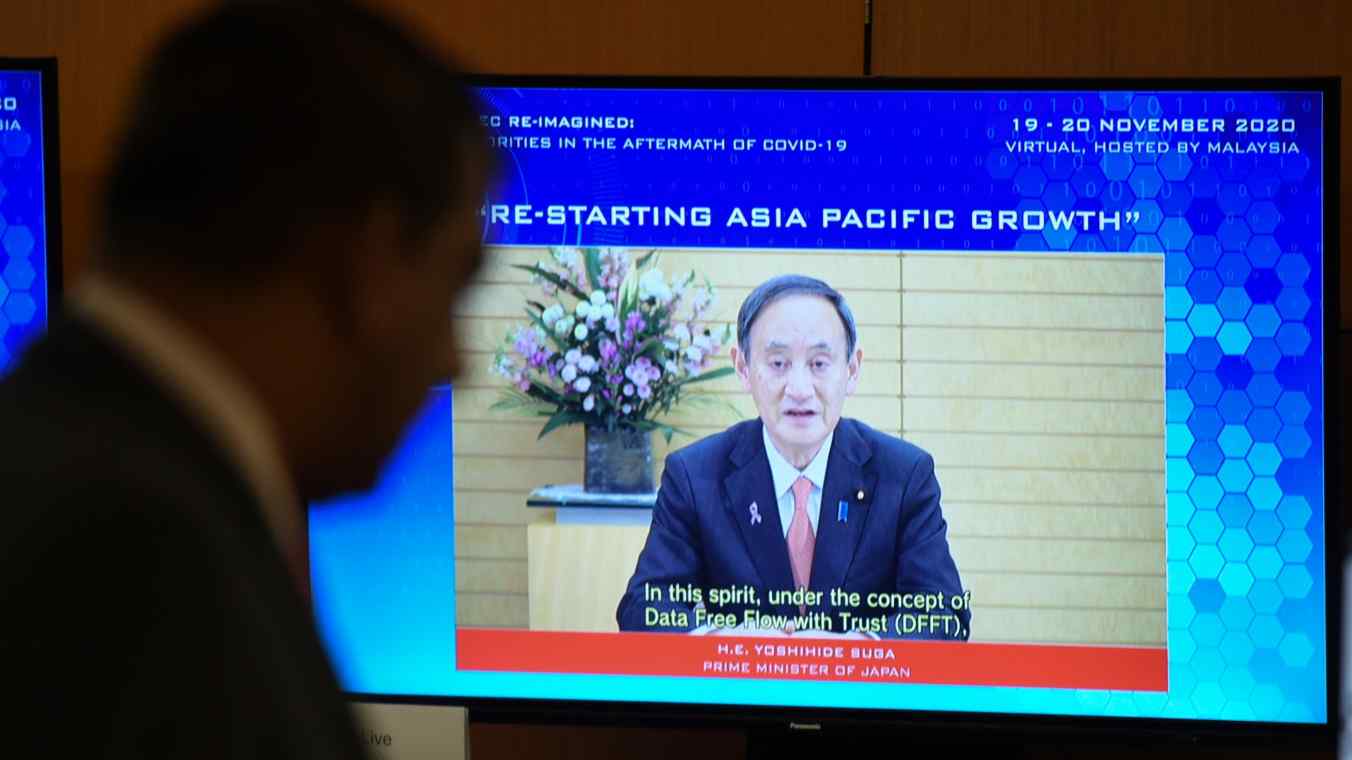 After years of tension with the U.S. during Donald Trump's presidency, which devolved into a tit-for-tat tariff war, Xi has sought to position China as an advocate of open trade and multilateralism. This continues in his APEC address: "Openness enables a country to move forward, while seclusion holds it back," he says. "In today's world, where economic globalization has become an irreversible trend, no country can develop itself by keeping its doors closed."

At the same time, Xi repeatedly emphasizes his government's new "dual circulation" economic plan centered on stoking domestic demand, while also taking advantage of international commerce. He notes that China's per capita gross domestic product has exceeded $10,000, and he says its middle-income population of over 400 million will power domestic consumption. This, he adds, will provide opportunities in the retail market worth $6 trillion this year alone.

"I am confident that the steady unleashing of the China market potential will create vast business possibilities for other countries, and this will create stronger impetus for maintaining stable growth of the global economy."

Xi also includes a plug for his Belt and Road Initiative, promising, "China will work to pursue high-quality Belt and Road cooperation with its partners, and seek greater complementarity between the development strategies and connectivity plans of regions and countries concerned."

On COVID-19, the Chinese leader argues that "all countries should act in the spirit of partnership and get through this tough time together."

The coronavirus, which first broke out in the Chinese city of Wuhan, has exacerbated friction between China and the U.S., as well as other governments. Xi hails his own country's performance in containing it: "Since the start of this year, facing the sudden onslaught of COVID-19, China has put people and life above everything else," he says. "The 1.4 billion Chinese people, united as one, have made a major strategic achievement in fighting the virus. We have endeavored to both contain the virus and speedily bring production and life back to normal."

By keeping the global economy open, he stresses, "we can defeat the virus at an early date and achieve robust, sustainable, balanced and inclusive growth for all."

"The need to protect our people has halted connectivity and disrupted trade and investment, which are vital for economic growth," he warns. "It is our duty as the leaders of the public sector to restore confidence and moot initiatives on a public-private-people partnership model."

He conceded that COVID-19 has gravely affected health security and stability, as well as food security across the region. "In response to the pandemic, governments have sometimes chosen policies that run counter to our long-held values within APEC and ASEAN," he said.

"The role of the private sector will be most important in rebuilding trust and reviving investment and employment," he adds.

Prayuth, who has faced months of turmoil at home amid persistent youth protests, also calls for coordination between ASEAN and APEC on a range of initiatives, including coronavirus vaccines. He rattles off a list of five future priorities: free and open trade; digital transformation; inclusive and sustainable growth; well-being; and food security. The health minister from Taiwan, which is participating in APEC as Chinese Taipei, highlights the island's COVID-19 success story. Chen Shih-Chung notes in prerecorded remarks that Taiwan has gone over 200 days without a locally transmitted infection, and says it has been "one of the few economies in the world with positive growth in these trying times."

He credits this to factors like prudence, a rapid response and transparency. And he says Taiwan is "happy" to share its methods and "work with member economies" to promote global health.

In the same session, the deputy director-general of Malaysia's Ministry of Health, HJ Rohaizat, stresses that health modernization is an "ongoing process" -- one Malaysia is committed to. He emphasizes that the government is pouring funds into the effort, with his ministry due to have its biggest budget ever in 2021.

"Our main goal is to create a quality business and investment climate" for small and midsize businesses and foreign investors, he says of the legislation, which made sweeping changes to more than 70 existing laws to cut red tape. Workers have protested that the move erodes their rights.

"We will finalize the implementing of regulations as soon as possible so that various benefits can be immediately felt," the president insists, inviting CEOs and entrepreneurs to take advantage.

"It does not matter what happens in the rest of the world, [but] in Asia, there is that determination to work together and to prosper together," he says in a conversation with Ho Meng Kit, CEO of the Singapore Business Federation. With respect to APEC, Lee acknowledges that the grouping's progress has been slow in the last few years, pointing out that the U.S. has preferred to deal with issues bilaterally and that the Trump administration has not been supportive of trade as a win-win proposition.

"I do not think that they are likely to change their position at this late stage [of Trump's four-year term], but we will have to see how the new Biden administration plays it," Lee says. "I think there will be more multilateralists. I think that they will be more supportive of the WTO, and of APEC."

Facebook's Sandberg: 'Preserve what is best about the open internet'

"We should work together to preserve what is best about the open internet, while protecting people's privacy and preventing harm," she says, calling a recent shift toward digital protectionism "self-defeating."

Sandberg presents her case in detail here, in an exclusive contribution to Nikkei Asia.

Malaysia's Muhyiddin: 'Trade and invest our way' out of the crisis

APEC, he says, must "trade and invest our way out" of the current economic downturn, as the grouping represents 60% of the world's gross domestic product.

"APEC assumes a central role in spearheading the post-pandemic economic recovery," the prime minister says in English. "We must come together and work constructively toward navigating the region along a path of robust, inclusive and sustainable economic recovery and growth."

Muhyiddin says the most important priority for APEC now is to "reaffirm our support and commitment to the rules-based multilateral trading system."

"This is essential for our businesses, as market stability and predictability are the central pillars which ensure that trade and investment continue to flow, even during times of crisis." He goes on to defend the World Trade Organization as the "primary pathway for countries to settle their differences."

The prime minister adds two other priorities as APEC looks to set a post-2020 vision: strengthening the digital economy and promoting inclusive growth, with an emphasis on women and youth. "The pandemic," he says, "has shown all of us that technology can step in and sustain communities even when our movement is restricted."