APEC in the COVID age: What to watch at Malaysia's online summit The APEC logo is displayed on a screen: The coronavirus has forced Malaysia to settle for hosting the event virtually.   © EPA/Jiji
P PREM KUMAR, Nikkei staff writerNovember 18, 2020 17:40 JSTUpdated on November 19, 2020 08:42 JST | Malaysia
CopyCopied

KUALA LUMPUR -- World leaders are set to meet webcam to webcam this week, when Malaysia holds a virtual Asia-Pacific Economic Cooperation summit amid the coronavirus pandemic.

This was supposed to be a moment of glory for Mahathir Mohamad, who was eager to host the forum for the second time as Malaysia's prime minister, after presiding over APEC in 1998. The 95-year-old would have been the first leader to do it twice. APEC: Xi says China has no intention of 'decoupling'

Instead, it will be Prime Minister Muhyiddin Yassin -- who replaced Mahathir this year and now faces his own fight for political survival -- opening a daylong meeting on Friday with representatives from 21 economies around the Pacific Rim.

Muhyiddin and several other leaders, including Chinese President Xi Jinping, are also scheduled to speak on Thursday during the APEC CEO Dialogues, which will involve discussions with business leaders on post-pandemic challenges.

All this will set the stage for another big virtual event this weekend, the Group of 20 summit hosted by Saudi Arabia.

Here are five things to watch for in the APEC sessions.

Before COVID-19 turned the world upside down, the main objective of the Kuala Lumpur summit was to decide on a vision to replace the grouping's Bogor Goals.

These loose goals, named after the Indonesian town where they were set in 1994, centered on "the long-term goal of free and open trade and investment in the Asia-Pacific." This was to be achieved "no later" than 2020.

It has not been easy, but the region has made major strides in the spirit of the Bogor Goals. Asia-Pacific countries have forged not one but two major multilateral free trade frameworks -- the 11-member Comprehensive and Progressive Agreement for Trans-Pacific Partnership, and the 15-nation Regional Comprehensive Economic Partnership, which was signed on Sunday and awaits ratification.

The next step for APEC is to reach a consensus on fresh priorities. As the host, Malaysia had indicated that the new goals should focus on inclusivity.

Trade Minister Azmin Ali, chairing a virtual APEC ministerial meeting on Monday night, said the post-2020 document will "build on the success of the Bogor Goals, and will chart the long-term strategic direction for the region ... at least for the next two decades."

Azmin stressed that Asia has and will continue to "resist the forces of protectionism in whatever form that they may come." And he said a priority is "shared prosperity." But after the meeting, Azmin conceded that there was some disagreement over the appropriate "level of ambition" for the post-2020 vision.

Malaysia hopes to avoid a repeat for the 2018 APEC summit in Papua New Guinea, where leaders failed to agree on a communique due to disputes between the U.S. and China. The 2019 summit in Chile was canceled due to public unrest. Chinese President Xi Jinping and other leaders attend a photo session at the 2018 APEC summit in Papua New Guinea, where they failed to agree on a joint statement.   © Reuters

One question in the runup to APEC was whether U.S. President Donald Trump would make an appearance. Barring a stunning reversal of the U.S. election, which he continues to challenge, this would be one of Trump's last chances to leave a mark on the international stage before President-elect Joe Biden replaces him next January.

Just before the summit, an unnamed U.S. official told Reuters that Trump intends to participate. Late last week, U.S. officials had said they were still determining who would represent the country at the leaders meeting.

Trump attended the APEC summit in Vietnam in 2017, but sent Vice President Mike Pence to Papua New Guinea. He had been expected to attend the Chile forum before it was called off.

Despite his administration's emphasis on the Indo-Pacific, Trump has made a habit of skipping Association of Southeast Asian Nations summits, including this month's virtual event hosted by Vietnam. But APEC might present an appealing opportunity for Trump to make his case against China one more time and block any declarations he deems to be favoring Beijing.

China, meanwhile, is likely to keep banging the drum of "multilateralism," as it has done throughout this year.

The APEC summit comes as the world counts the staggering costs of 55 million coronavirus infections and 1.33 million deaths.

Senior officials from the 21 countries, meeting last week in preparation for the main event, recognized that policies adopted collectively by APEC economies will be decisive in the fight against the pandemic. After all, these nations account for about 40% of the world's population, half of global trade and 60% of global gross domestic product. A medical worker collects a swab sample for a coronavirus test in Petaling Jaya, Malaysia, in October.   © Reuters

APEC officials say their work in recent months has produced a declaration enabling the movement of essential goods, such as medicine and medical equipment, and a proposal to review measures on the movement of people amid travel restrictions.

"We have faced economic uncertainty and other challenges that threaten the prosperity and well-being in the region before, but nothing like the threat of the pandemic," Rebecca Fatima Sta Maria, executive director of the APEC Secretariat, was quoted as saying in a statement. "It currently dominates our life, economic activity and policy decisions."

She added: "It is important to make sure we learn from this and emerge better and more resilient."

After taking office in March, Malaysia's Muhyiddin will have his first real moment in the global spotlight. But he will not have much time to bask in the glory.

For weeks, the prime minister has been fighting to keep his job, as opposition leader Anwar Ibrahim insists he has enough parliamentary support to take over. A crucial test will come just days after APEC, when the country's 2021 budget will be put to a vote in the lower house.

At best, Muhyiddin controls a razor-thin majority in the 222-member chamber. In light of the COVID-19 crisis, Malaysia's king has called on legislators to cooperate and pass the budget for the sake of the country. But there are no guarantees, and a rejection would automatically trigger a snap election under the law. 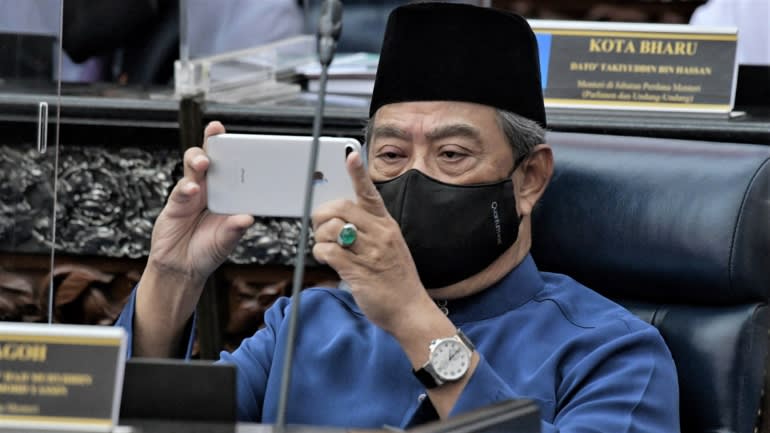 Malaysian Prime Minister Muhyiddin Yassin takes a picture on Nov. 6 in parliament, where he is about to face a critical test.   © Malaysia Information Department via Reuters

Ongoing disputes over the South China Sea look likely to come up again. China, whose claims to much of the sea overlap with those of several other countries, may be asked to explain the rising presence of its military vessels in neutral waters.

Indian Foreign Minister Subrahmanyam Jaishankar, whose country has its own tense territorial dispute with China in the Himalayas, on Saturday lashed out at Beijing over moves that "erode trust" in the South China Sea. He stressed that all parties should adhere to international law while respecting territorial integrity and sovereignty.

Speaking at the latest ASEAN summit, Chinese Premier Li Keqiang expressed hope for a quick conclusion of the much-awaited code of conduct for the South China Sea. "By so doing, we will demonstrate to the international community that we have the wisdom and capability to properly manage the situation in the South China Sea and safeguard its peace and stability," Li said.

Diplomacy watchers will also be eyeing Taiwan's participation in APEC, in a year in which the island has distinguished itself with its deft response to COVID-19.

The self-ruled democracy, which China insists is part of its territory, gets few opportunities to take part in international events. APEC is an exception, though Beijing refuses to accept the involvement of the Taiwanese president.