Caught between China and the bloc, PNG's domestic issues dominate AUCKLAND -- Corralling the 21 governments in the Asia-Pacific Economic Cooperation bloc into acting on regional challenges is hard enough at the best of times. It may be something practically unachievable in 2018.

Already strained by U.S. President Donald Trump's retrenchment from regional economic affairs, APEC has turned over the task of running its 180 annual meetings of ministers and other officials to Papua New Guinea, its poorest member, during the summit which will run Nov. 12-18.

"It is fair to say that 2018 is the riskiest year in the decade" for the region, said Yves Tiberghien, a political science professor who specializes in global economic governance at the University of British Columbia in Canada, citing issues such as North Korea's nuclear tests and U.S.-China trade tensions. "When the going is rough, you should have an experienced and very well-resourced driver."

Port Moresby, PNG's capital, isn't that. While it is rich compared with the rest of the country, it's still poor in resources and also one of the world's most dangerous cities. Murder, sorcery-linked assaults, rape and robbery are common.

Tiberghien said Port Moresby was a "very difficult place to hold a global summit," noting that members of a recent Japanese government mission were not allowed, for security reasons, outside their hotel or even to walk between airport terminals. China displays Pacific ambitions in Great Game with Australia and US

There are concerns that PNG could seek Chinese help to run the summit and Beijing would come to dominate the meetings. This has forced Australia, New Zealand and Indonesia to pour in aid to avoid having to deal with China's overbearing presence.

PNG was appointed to lead the APEC summit in 2013, a year into the government of Prime Minister Peter O'Neill and ahead of an expected mineral boom. Instead, the economy tanked as commodity prices fell globally, pushing the government to the brink of bankruptcy. The government said in its 2018 budget that it estimated the deficit would reach 2 billion Papua New Guinea kina ($600 million) or 2.5% of gross domestic product, but critics say it's more likely to hit 5.8%.

Australia has provided 100 million Australian dollars ($76 million) in aid for the 2018 summit, in addition to development aid worth A$497 million. Justice Minister Michael Keenan told Australian Broadcasting Corp. that Canberra had been advised that China would provide if Australia did not: "Obviously, that's a possibility." He added: "We are their closest security partner and I consider that is going to continue into the future."

Despite Canberra's explicit support, PNG still played the China card. On July 7, O'Neill said that Chinese President Xi Jinping was the first leader to agree to attend the summit. 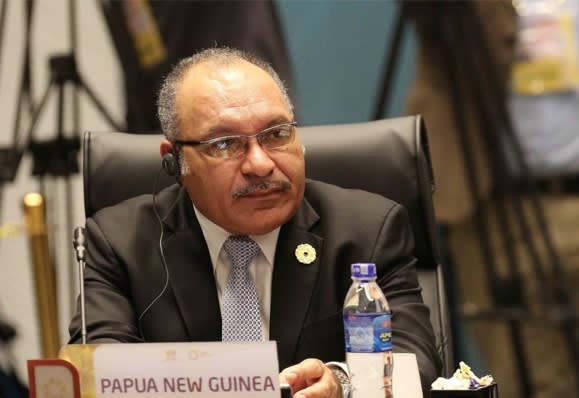 "We value their continued support and investment in the country," O'Neill said, adding that PNG was part of China's Belt and Road Initiative.

Australia is also spending A$48 million to provide F-18 jets and 73 police to help with the APEC summit. Indonesia and New Zealand are sending police offers too. New Zealand on Jan. 12 raised its financial support for PNG's hosting efforts to 15 million New Zealand dollars ($11.7 million), agreeing to help finance maritime and cyber security, among other areas.

According to a Jan. 11 announcement by O'Neill, thousands of APEC delegates will be housed in Port Moresby harbor on three leased cruise ships, a step that will address both the lack of quality hotel rooms and the dangerous urban environment. The ships "will adequately accommodate all the [delegates] that will come in," the prime minister said when visiting the construction site of the main APEC Summit in the capital.

The International Monetary Fund had estimated that PNG would spend 3 billion Papua New Guinea kina on APEC to build hotels, offices, roads and shipping terminals, equivalent to approximately 7% of all government expenditure. But in the PNG 2018 government budget, tabled Nov. 26, the summit and its 180 planned meetings were allocated just 300 million Papua New Guinea kina.

Jonathan Pryke of the Australian think tank, the Lowy Institute, said it was "no secret that the Papua New Guinea economy is facing some very tough times." Its budget was not feasible and the government was "caught in a straightjacket of spending."

Paul Flanagan, director of the Moresby-based think-tank PNG Economics, agreed. He said even with a "stripped down event, one just needs to look at the cost of previous meetings to see that the equivalent of just [roughly] $100 million will just not cut it."

Flanagan estimated that the government will have to find up to an additional 700 million kina in a supplementary budget for APEC. Despite such shortfalls, he said that leaders would still turn up because Australia's security support would provide enough assurances.

Rohan Fox, an economics lecturer at the University of Papua New Guinea, said he hoped APEC was successful because PNG "absolutely deserves some positive publicity, it gets more than its fair share of the negative kind."

But Fox also said that the "putting on a good show will overshadow the provision of basic services in a time when budget spending has been cut for three years in a row." He was also doubtful that playing host would have any long-term benefit for the island state.

The main APEC venue at Ela Beach in downtown Moresby is paid for through a tax-credit scheme offered by LNG producer Oil Search, which owns 29% of the ExxonMobil LNG operation. With just 11 months to go until the summit, the building is still incomplete.