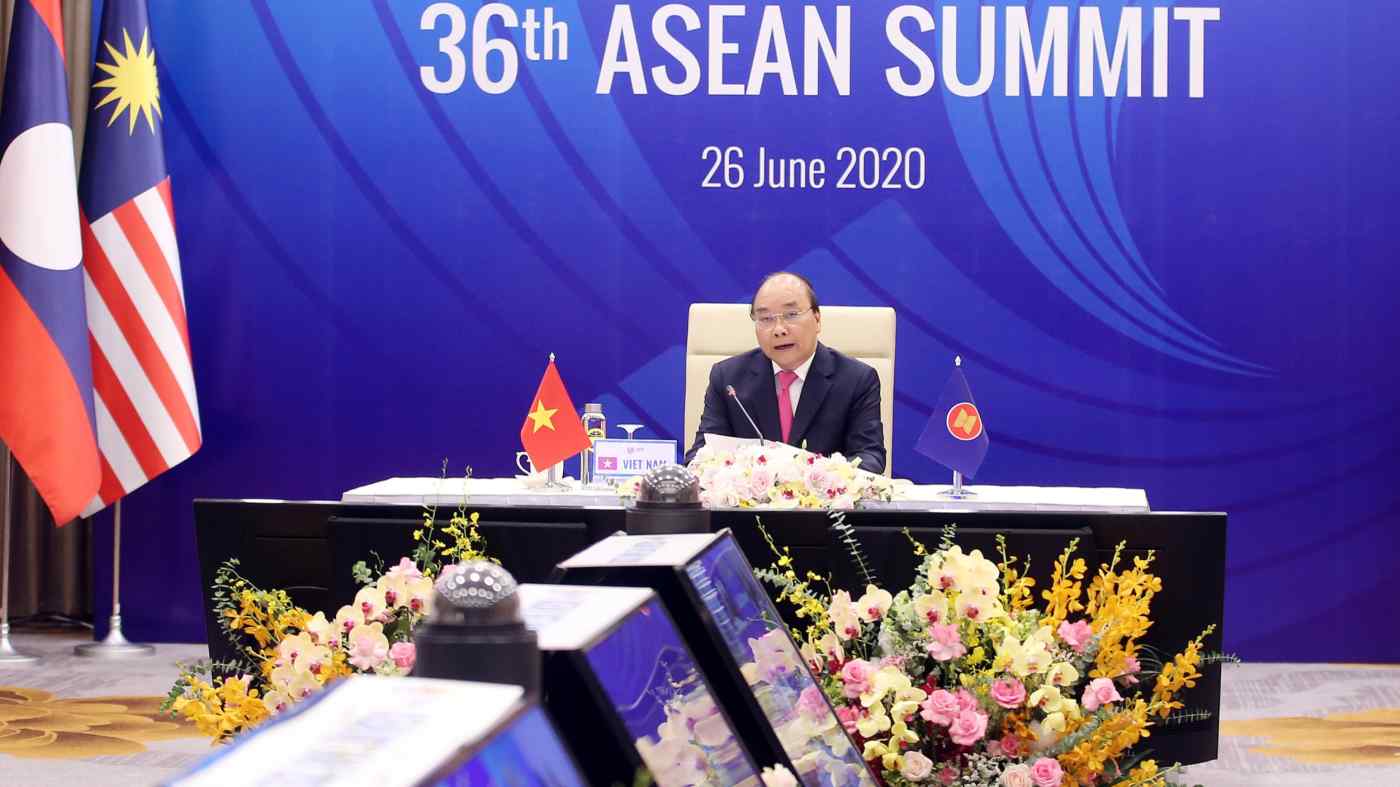 HANOI/SINGAPORE -- Leaders from the Association of Southeast Asian Nations on Friday stressed the importance of "freedom of overflight" over the South China Sea, sending a strong message to China, which has not ruled out imposing an air defense identification zone over the area.

The leaders, attending a virtual ASEAN summit hosted by Vietnam, also agreed to address public health care challenges by establishing a regional pandemic fund and building reserves of medical supplies. With COVID-19 testing the bloc's resilience and trade ties, they vowed to maintain open and connected supply chains as well.

The summit comes amid increasingly aggressive moves by Beijing to strengthen its effective control over the South China Sea, after it emerged from the pandemic earlier than the rest of Asia.

The final version of the chairman's statement reaffirms "the importance of maintaining and promoting peace, security, stability, safety and freedom of navigation and overflight above the South China Sea."

Air defense identification zones are areas where a country reserves the right to identify aircraft and, if it sees fit, scramble jets to intercept intruders. China in 2013 announced an ADIZ over a vast area of the East China Sea.

Beijing has been claiming sovereignty over much of the South China Sea. Foreign Ministry spokesman Zhao Lijian, in a briefing on Monday, insisted that "every country has the right to establish an ADIZ and to decide whether to establish an ADIZ based on the intensity of the threats it faces in air defense security."

Zhao, implying that a zone over the South China Sea is a possibility, went on to say: "In the light of the air security threats China faces above relevant waters of the South China Sea, China will carefully and prudently study the relevant issue taking into account all factors."

ASEAN leaders "discussed extensively the recent developments in the region and the world, even pressing issues in the region," Vietnamese Prime Minister Nguyen Xuan Phuc told reporters on Friday evening. "Disagreements are unavoidable, but we also call on the parties to exercise self-restraint and avoid acts that further complicate the situation and fully observe international law."

ASEAN and China have been negotiating a code of conduct for the South China Sea, which they planned to conclude in 2021. But the prime minister said the pandemic has "disrupted and postponed the dialogue for building the COC."

The summit chairman's statement showed that the leaders also expressed concerns on "the land reclamations, recent developments, activities and serious incidents" in the sea, which "have eroded trust and confidence, increased tensions and may undermine peace, security and stability in the region."

Vietnam, this year's ASEAN chair, has a more hard-line stance toward China than other members of the bloc. The words "serious incidents," which were not used in last year's chairman's statement spearheaded by Thailand, show a strengthening of the language after Vietnam's recent clashes with Beijing over disputed territory, even though the document did not name China.

Vietnam's foreign ministry said this month that a Chinese vessel sailed extremely close to a Vietnamese fishing boat near the disputed Paracel Islands, causing waves that knocked crew members and equipment into the water. The Chinese ship rescued the sailors but also took seafood and equipment from the boat.

This follows an April incident in which a Chinese Coast Guard ship rammed and sank a Vietnamese boat near the Paracels.

Beijing conducted military drills with the aircraft carrier Liaoning in the South China Sea in mid-April as well. That month also saw China announce the establishment of new administrative districts governing the Paracels and the Spratly Islands, a move protested by Hanoi.

Indonesia, while not in direct conflict with China over territory, is taking a tougher stance toward Beijing, too. Chinese fishing boats have been operating in waters within Indonesia's exclusive economic zone, in an area claimed under Beijing's "nine-dash line" covering most of the South China Sea. Jakarta sent a letter to the United Nations about the matter in late May.

The 10-member ASEAN holds summits twice a year. The leaders were supposed to gather in April, but postponed the meeting due to the pandemic, which has been severely impacting the region's economies. Strategies for economic recovery and long-term immunity were high on the agenda on Friday.

"[ASEAN is] now standing before the opportunities and challenges generated by the global geostrategic shift and the impacts of COVID-19," Vietnamese Prime Minister Phuc said during the opening ceremony.

A potential resumption of cross-border regional travel is one of top concerns for businesses in the region. Indonesian President Joko Widodo during the summit stressed the need for "ASEAN travel corridors" that would allow essential cross-border business travel to resume, Foreign Minister Retno Marsudi told reporters. "The president said that ASEAN leaders should assign ministers to discuss the ASEAN travel corridors," she said.

The leaders agreed to promote "e-health care services" in response to growing demand for health care delivered through digital technology and telecommunications, especially during disasters and pandemics.

With respect to trade, the summit meeting also reaffirmed the importance of implementing free trade agreements and comprehensive economic partnerships between ASEAN and key economies. The statement mentioned India as a major trading partner, alongside China, Japan, South Korea, Australia, New Zealand, and Hong Kong. Trade agreements will contribute to "the post-pandemic recovery and in creating resilient supply chains," the leaders said in the statement.

At the ASEAN Summit in Bangkok last November, India's Prime Minister Narendra Modi told fellow Asian leaders that India would withdraw from the negotiations to sign up for the 16-nation Regional Comprehensive Economic Partnership trade pact.

For the online summit hosted by Hanoi, leaders reaffirmed plans to keep the negotiations on schedule, while expressing hope that New Delhi will remain in the fold. The chairman's statement says the leaders "look forward to the signing of this agreement by the end of this year."