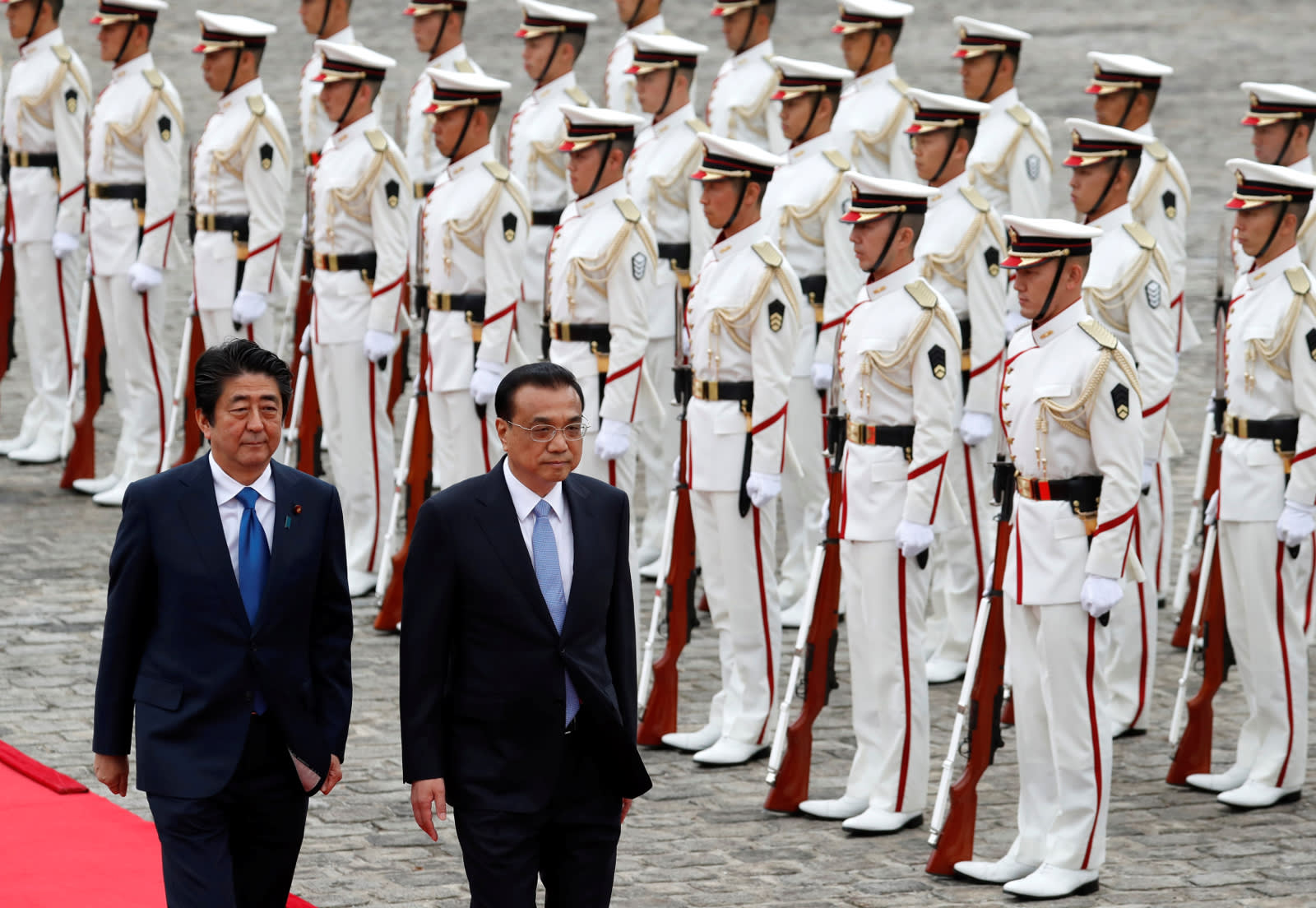 China and Japan, as global economic powers, have agreed to protect free trade and advance globalization, Li told a joint news conference after the meeting. Abe said the countries will "work together to meet Asia's brisk demand for infrastructure."

During the talks, held after a trilateral meeting with South Korean President Moon Jae-in, the Japanese leader said he looked to "raise Japan-China relations to a new level."

It has been eight years since a Chinese premier last visited Japan. When Japan nationalized the Senkaku Islands, which China claims as the Diaoyu, in 2012, bilateral relations reached "their worst point in the postwar era," according to a diplomatic source.

But the neighbors now have something to unite them: opposition to U.S. President Donald Trump's determination to put "America First" in all international dealings. China has borne the brunt of Trump's increasingly protectionist economic policies, including sweeping tariffs, pushing it to mend ties with its neighbors in Asia. Abe, for his part, seeks a decisive diplomatic win as he prepares to run for re-election as his party's leader in the fall.

Financial cooperation, long stalled between the countries, will take center stage. China will grant Japanese parties a 200 billion yuan ($31.4 billion) quota under its Renminbi Qualified Foreign Institutional Investor program, allowing investors from this country to trade on the mainland in yuan-denominated securities, including shares in initial public offerings. Japan's leading banks and brokerages are expected to vie for a piece of that quota.

More than 10 economies in Asia, Europe and the Americas have joined the RQFII system so far. But political frictions had kept Japanese institutions out of the game.

The leaders also agreed to begin negotiations on reviving a currency swap pact. Were a financial crisis or other disruption to make yuan hard to come by on the market, the currency could instead be obtained through the Bank of Japan.

Infrastructure exports to third countries were on the table a swell. Asian infrastructure demand comes to $1.7 trillion annually, according to the Asian Development Bank. Japan and China have agreed to set up a forum where business leaders and relevant government officials can discuss ways to bolster joint exports in fields such as electric power, transport and digital infrastructure.

Yet the two sides' views on free trade differ somewhat in their details. Hiroshige Seko, Japan's economy minister, urged China during a discussion Wednesday with Commerce Minister Zhong Shan to "eliminate distortionary measures" in the steel market, such as industrial subsidies, that have led to severe overcapacity.

Intellectual property is another point of conflict, as China in effect demands technology transfers by foreign companies in exchange for market access.

Abe and Li avoided substantial discussion of other points of disagreement. The leaders agreed to implement a so-called maritime and aerial communication mechanism to prevent military collisions in and over the East China Sea. But whether that mechanism covers the area around the Senkakus was not made clear.

Disagreement over that very point accounts for the unusual length of negotiations on that mechanism, which kicked off in 2007. Japan was concerned that, were that area covered by the arrangement, China would abuse the mechanism to encroach on Japanese territorial waters. China, on the other hand, argued that the high risk of a collision in the area around the Senkakus was ample reason to apply the communication mechanism there.

Ultimately, the two sides decided not to specify exactly where the mechanism applies. Nor were China's concerns about the Abe government's views on historical conflicts between the nations and Japan's increasing closeness with Taiwan major topics for conversation.

When the discussion turned to North Korea, the leaders agreed only that they would like to see the Korean Peninsula denuclearized. The Japanese side said the leaders agreed to cooperate on resolving issues related to Japanese nationals abducted by the North decades ago, but no details of that discussion were released.