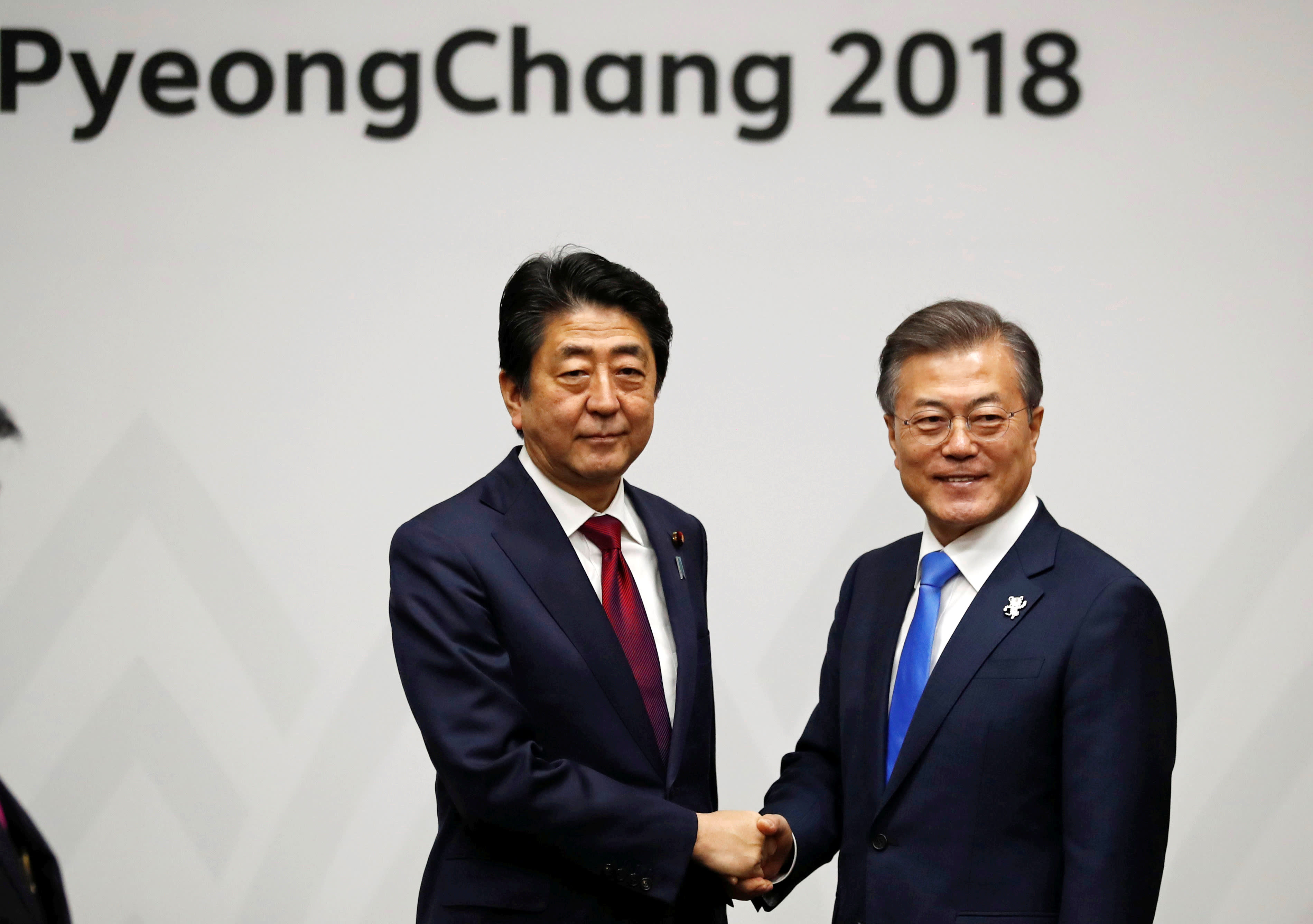 SEOUL -- Japanese Prime Minister Shinzo Abe told South Korean President Moon Jae-in on Friday that he should be wary of North Korea's "charm offensive" as the leaders met for a one-hour summit in Pyeongchang, a few hours before the town saw the opening ceremony of the Winter Olympic Games.

While the run-up to the Winter Olympics has seen increased unity between the two Koreas, "North Korea continues to develop its nuclear weapons and long-range missiles. [We should] be careful about North Korea's charm offensive," Abe told Moon.

Moon rebuffed Abe's worries, making clear that talks between Seoul and Pyongyang were not watering down the international agenda of cooperation towards denuclearization.

"It is nothing more than baseless concern that South-North dialogues are watering down denuclearization or international cooperation," said Moon. "Improvements in South-North relations should contribute to denuclearization eventually. I hope that Japan actively engages in talks to continue this mood."

The two leaders affirmed their shared stance on heightening pressure on North Korea to step back from its nuclear programme.

"North Korea must recognize that the strong ties between Japan, the United States and South Korea will never waver," Abe told reporters after the meeting.

Their summit comes as Moon plays the part of Olympic diplomat, aiming to resolve tensions on the peninsula through dialogue, while the U.S. and Japan stick to their strategy of "maximum pressure" on North Korea, imposing strong sanctions on Pyongyang until the isolated country comes to the table for denuclearization. The two leaders also differed during their meeting in their opinions regarding the issue of South Korea's "comfort women," who were forced into sexual slavery during the Japanese occupation of World War II. Abe urged Moon to keep to their 2015 agreement on the sensitive matter, even though that was signed by the previous Park Geun-hye administration.

Under the 2015 agreement, South Korea and Japan declared a "final and irreversible" resolution of the issue on condition of Abe's apology and 1 billion yen (about $9 million) compensation from Japan to the victims. However, Moon said that he could not accept the issue was resolved as some victims have been excluded.

Moon said the issue could only be resolved when Japan honors the victims and helps to heal their wounds. Seoul and Tokyo have been at odds over the issue since Moon last December raised questions about the legality of the 2015 agreement.

Although the two leaders failed to narrow gaps on these two key issues, they did agree to resume shuttle diplomacy between Seoul and Tokyo as well as host a summit between South Korea, Japan and China in Tokyo soon.