Abe faces balancing act as US adds pressure on China 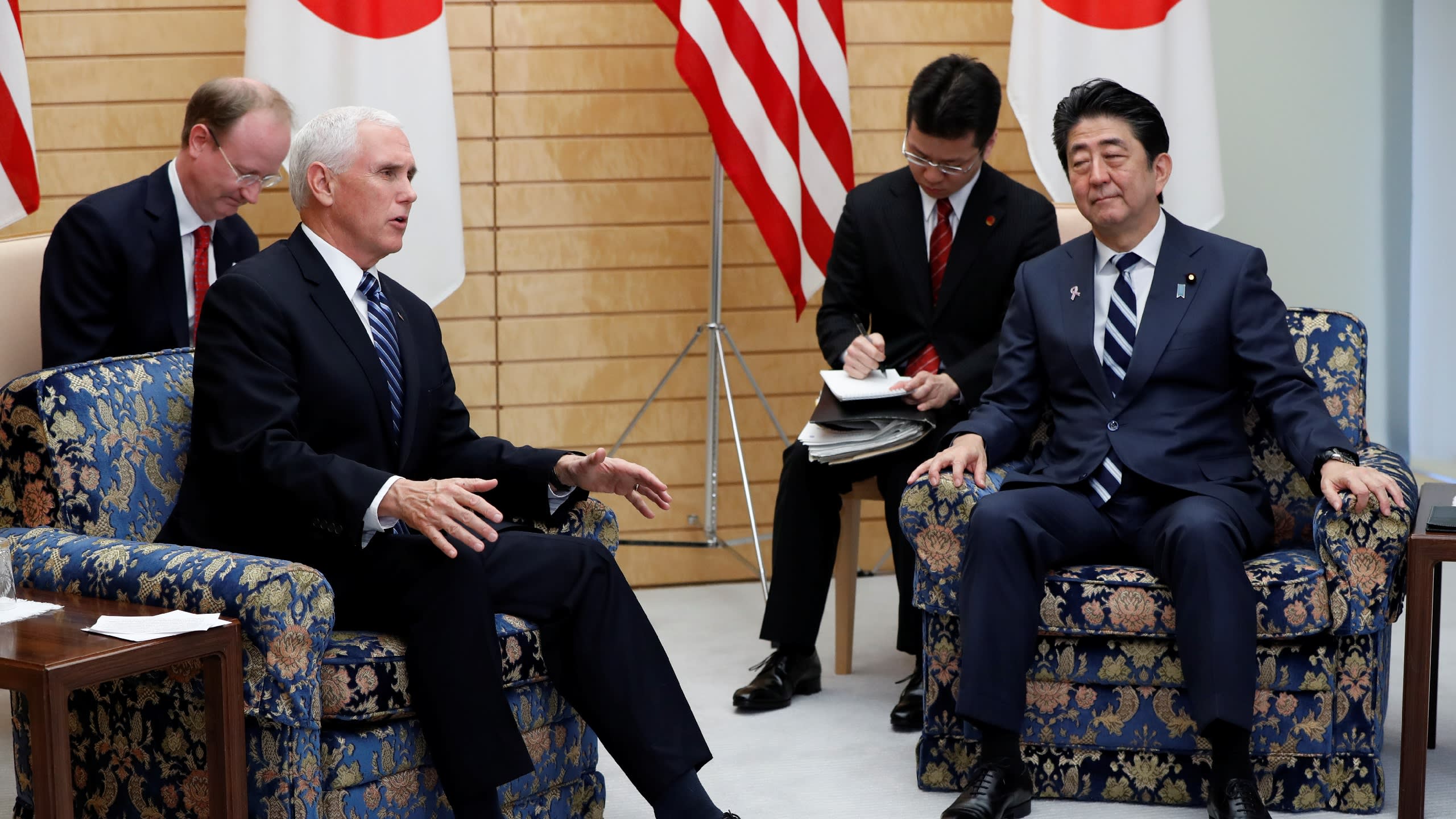 Pence stopped over in Tokyo on his way to the summits of the Association of Southeast Asian Nations in Singapore and the Asia-Pacific Economic Cooperation in Papua New Guinea. While Pence is a stand-in for President Donald Trump, who chose to skip the Asian multilateral gatherings, the vice president himself has gained the spotlight since delivering a scathing criticism of China in a speech last month.

It was Abe's first meeting with a Trump administration official since the U.S. midterm elections last week. And while the U.S. side is keen to play up its alliance with Japan amid competition for supremacy with China, the Trump administration's increased pressure on Beijing makes Abe's delicate balancing act with the world's two greatest economic powers even harder.

Those projects are expected to serve as a counterbalance to the massive infrastructure construction undertaken by China's Belt and Road Initiative. President Xi Jinping's signature program aims to build a sprawling economic bloc across Asia and beyond.

After their meeting, Abe and Pence exchanged joint statements -- an unusual move given their offices' difference in rank -- affirming their countries' intent to cooperate on infrastructure projects in third countries under principles of transparency and debt sustainability.

The Trump administration's enthusiasm for Indo-Pacific development is welcome news for the Japanese leader. It was Japan that conceived of the initiative, hoping to draw the Trump administration's attention to Asia, and while not openly discussed, with a hope that keeping China busy in the Indian Ocean would divert pressure from the neighboring East China Sea.

Abe's diplomatic strategy has been to gradually repair relations with China, whose huge market is indispensable to Japanese businesses, while solidifying the U. S-Japan alliance as a bedrock of international relations. Last month, Abe visited China as the first Japanese leader in seven years, showing willingness to cooperate on Belt and Road and other matters.

But as the U.S. and China increasingly butt heads over trade, Abe's balancing act becomes tricky.

"We agreed in our recognition that it is of importance for Japan and the U.S. to continue our close collaboration in conducting constructive dialogue with China," Abe said at the press conference.

Abe's government has been working carefully to avoid making the U.S. suspicious of Japan's moves to thaw relations with China. It made an effort to explain its policy toward China to the Trump administration ahead of last month's state visit.

But while Abe's rapprochement is welcomed by most in Washington, James Schoff, a senior fellow at the Carnegie Endowment for International Peace, warns that China hawks in the Trup administration, such as White House trade adviser Peter Navarro, U.S. Trade Representative Robert Lighthizer and Commerce Secretary Wilbur Ross, may oppose the moves.

"The hard-liners see a high stakes competition with China, setting the bar very high. They might think that closer Japan-China ties will give Beijing breathing room," he said.

Pence, for his part, has become a symbol of the Americans' China pressure campaign since last month's fiery speech, in which he charged that Beijing "has prioritized capabilities to erode America's military advantages on land, at sea, in the air, and in space." He also targeted the Made in China 2025 industrial plan, and accused China of "wholesale theft of American technology" and "turning plowshares into swords on a massive scale."

Moreover, Tokyo's uneasiness over trade talks with Washington was visible at Tuesday's meeting.

At the press conference, Pence asserted that "American products and services too often face barriers to compete fairly in Japanese markets."

Regarding the trade agreement on goods on which Trump and Abe agreed to start negotiations in September, Pence said, "We're confident that this agreement will establish terms on goods, as well as on other key areas, including services." The U.S.-Japan trade agreement "will be a model for the Indo-Pacific," he added.

While Pence offered Japan certain assurances -- such as that the U.S. will not hike tariffs on Japanese automobiles while the trade pact is under negotiation -- the two sides appear to have different understandings of the deal.

The Japanese government has described the agreement to its domestic audience as centered on goods like automobiles and agricultural products. Pence, however, wrote on Twitter upon arriving in Japan Monday that he and Abe would discuss "negotiations for a free-trade agreement," which would include services.

Japan's sensitivity on the topic was shown clearly in a briefing after Tuesday's press conference. "'Bilateral trade agreement' was translated as 'FTA' in simultaneous interpretation," said Yasutoshi Nishimura, a deputy chief cabinet secretary, "but it is a bilateral agreement, and not an FTA."

Tokyo's worries extend beyond the deal's title. Should tensions over Taiwan heighten between the U.S. and China, for instance, it would further test Japan's loyalties. The U.S. has been strengthening ties with the island, with arms sales and the passage of a law encouraging mutual official visits to Taipei.

China views Taiwan as a core interest on which it will not compromise and abhors any U.S. involvement in the issue. "If tensions increased and China started bullying Taiwan, it would be hard for Abe to remain silent," said Carnegie's Schoff. "Would he want to discard all his efforts to improve relations with China over that? It would be tricky."