November visit to coincide with APEC and take leader to Darwin

TOKYO/SYDNEY -- Japanese Prime Minister Shinzo Abe is considering a visit to Australia in November to meet with counterpart Malcolm Turnbull, Nikkei has learned.

Such a visit would strengthen cooperation toward Tokyo's goal of a "free and open" Indo-Pacific, a plan proposed by Abe in 2016, that would bring together the democratic nations of the U.S., Japan, Australia and India, as China's regional influence rises.

Australia has traditionally maintained close ties with Japan, which has been investing in Australian iron ore since the 1960s and has taken in part in LNG projects. More recently, though, China has loomed over their relationship, as Australia deepens its dependence on Beijing economically.

Under the premise that he wins the September leadership election in his Liberal Democratic Party and stays on as prime minister, Abe is looking at an Australia visit just before or after the Nov. 17-18 summit of the Asia-Pacific Economic Cooperation forum in Papua New Guinea. Turnbull survived a challenge to his own leadership on Tuesday.

While there, Abe is expected to visit the Northern Territory capital of Darwin, where a liquefied natural gas project led by Japanese oil and gas distributor Inpex is underway. The Ichthys project's peak output capacity is estimated at just over 10% of Japan's total LNG imports. Abe will likely attend a ceremony for the project. 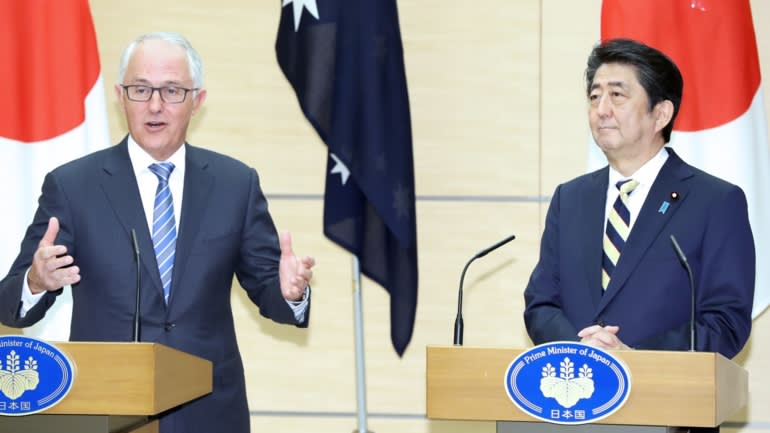 Abe and Turnbull are expected to discuss reaching a broad agreement on a visiting-forces agreement, which would provide a legal basis for when Japan's Self-Defense Forces operate in Australia and Australian forces do so in Japan. One sticking point is whether the death penalty can apply for serious crimes committed in Japan by Australian military personnel. Japan has the death penalty, while Australia does not.

Japan and Australia plan to deepen cooperation in line with the Indo-Pacific strategy. Foreign ministers from both countries and the U.S. agreed on Aug. 4 in Singapore to strengthen maritime security capabilities around Pacific islands. Areas of cooperation include working on ports, supplying patrol vessels and training personnel.

Even though the "free and open Indo-Pacific strategy" was proposed as a response to China's rise in the region, Japan, the U.S., Australia and India take their own approaches.

Abe and Turnbull's predecessor Tony Abbott were on friendly terms as fellow conservative politicians. Turnbull, who succeeded Abbott in September 2015, was initially portrayed as closer to China. A decision by his government to award a large-scale contract for next-generation submarines to France instead of Japan was a major setback for Tokyo. Japan had been seen as a strong bidder under Abbott.

Turnbull has come to see the Chinese more warily of late as their influence in Australia has grown through investment and political donations. Since the second half of 2017, his government has stepped up legislative efforts to contain Beijing.