Moscow official says there is 'no change' regarding the territorial rift 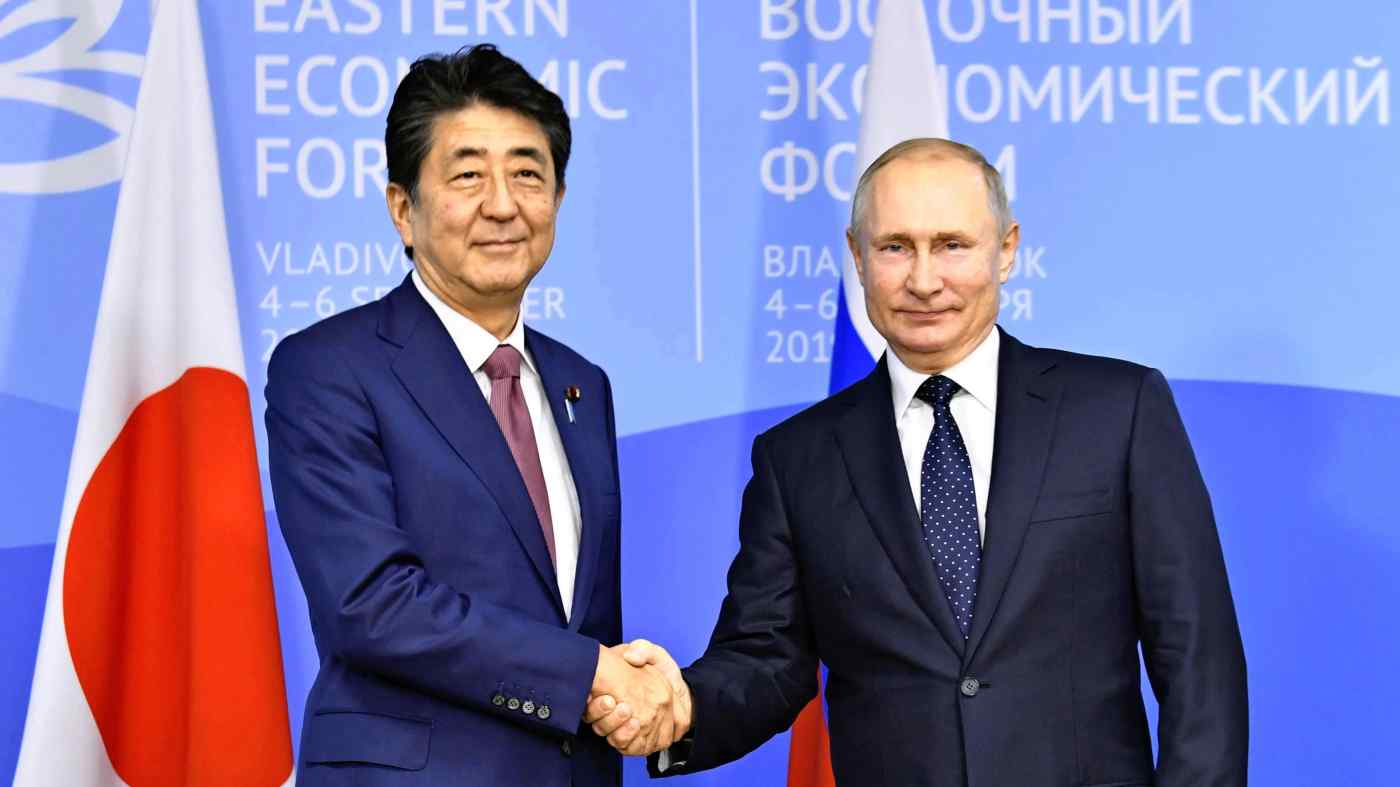 VLADIVOSTOK, Russia (Kyodo) -- Japanese Prime Minister Shinzo Abe called on Russian President Vladimir Putin on Thursday to step up efforts to resolve a long-standing territorial dispute between their countries and sign a postwar peace treaty, calling it their "historical duty."

"The new relationship of cooperation between Japan and Russia is becoming more apparent thanks to our work," Abe said in a speech at a regional economic forum in Vladivostok in the Russian Far East as Putin listened.

Japan and Russia are engaged in a row over the sovereignty of four Russian-held islands lying off Hokkaido in northern Japan, which has prevented them from signing a formal peace treaty since the end of World War II.

Putin confirmed Thursday his agreement with Abe last year to accelerate peace treaty talks based on a 1956 joint declaration, which mentions Moscow handing over two of the four islands.

The Soviet Union took control of the islands -- collectively called the Northern Territories in Japan and the Southern Kurils in Russia -- after Japan's surrender on Aug. 15, 1945.

The joint declaration stipulates Moscow hands over to Tokyo the two smaller islands -- Shikotan and the Habomai islet group -- once a peace treaty is concluded. The other two are Etorofu and Kunashiri islands.

At a bilateral meeting earlier in the day, the leaders agreed to continue "future-oriented" negotiations, according to the Japanese Foreign Ministry.

The leaders will meet again in November on the fringes of an Asia-Pacific Economic Cooperation summit in Chile, Ushakov said.

Earlier Thursday, Putin hailed the opening of a seafood processing factory on Shikotan by sending a video message to a ceremony marking the start of operations, a move seen as flaunting Russia's control of the islands.

Despite the lack of progress on the issue, Abe and Putin said after their previous meeting in June that they would move ahead with plans to conduct joint economic activities on the islands. They confirmed Thursday a pilot program for tourism will start in October.

"I welcome the fact that our agreement is being steadily implemented," Abe said at the outset of Thursday's meeting, held on the sidelines of the Eastern Economic Forum.

Putin said bilateral relations "are stable and developing dynamically," and that he looks forward to discussing future cooperation with the Japanese leader.

It was the 27th bilateral meeting between the leaders.