Afghan economy on verge of collapse as US troops depart BAGRAM, Afghanistan -- As the U.S. military drawdown in Afghanistan nears completion, concerns are growing over the country's fledgling economy and weakening security.

Nowhere is the impact of the troop withdrawal more apparent than in the local economies of cities that profited from trade associated with nearby U.S. military bases, such as Bagram and Kabul.

For many years, Bagram, located in the eastern province of Parwan, was the nexus of regional economic opportunity. But today it resembles a ghost town. The shops that were once filled with foreign electronics and other imported and domestic products sit empty. Most business owners who came here for the boom times have closed up shop and relocated elsewhere.

"They came to our country, destroyed everything, and now left without a word," said a local shopkeeper in Bagram on condition of anonymity. The U.S. Army and its allies vacated their largest military establishment in Bagram during the wee hours of the morning, without coordinating their departure with their Afghan counterparts.

His shop -- stocked with American goods like combat boots, secondhand clothes, expired cosmetics and batteries -- is gathering dust. "My business has suffered since the Americans left. I used to make at least 5,000 Afghanis ($62) a day, but now I make barely 500 Afghanis ($6). 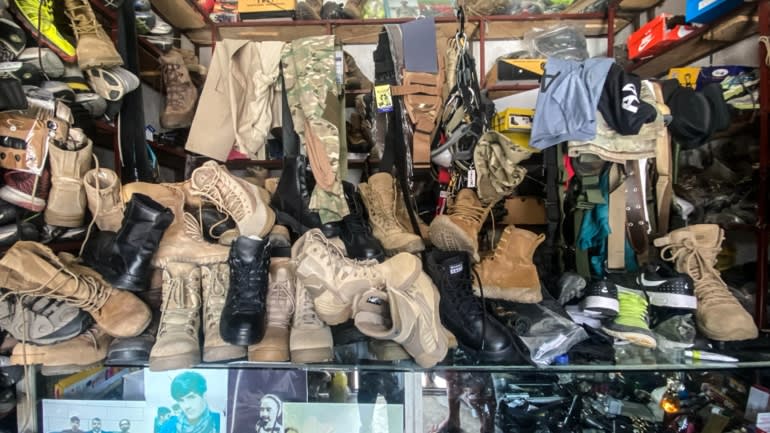 A shop in Bagram is filled with American goods like combat boots, underwear, shirts and tools on July 6. (Photo by Kanika Gupta)

The 20-year-old shopkeeper laments that he had big dreams to go to college and get a decent job in the city. But the Americans abruptly abandoning the country without ensuring the peace and stability they promised has shattered his dreams.

"I don't know what to do. We don't get as many customers now," he said. "The security situation is also deteriorating by the day. Even then, I would prefer to live on half a piece of bread than wish for Americans to return."

According to the district governor, Lala Shirin Darwesh Roufi, the U.S. withdrawal has impacted every house in Bagram. "The pullout is not only bad for Bagram but also for the economy," he said.

Roufi claims that Bagram Airfield was a source of employment for more than 30,000 Afghans from the surrounding area. But now, what they are left with is American junk, most of which is unusable for the locals and the Afghan forces. A market in Kabul displays expired cosmetics and health creams obtained from American military bases in the country. (Photo by Kanika Gupta)

"Bagram is a strategic location from an economic, political and military standpoint. Now that the Americans are gone, we hope to attract more investors to come and invest in the city to uplift its economy," Roufi said.

But this is much easier said than done.

Taliban checkpoints have mushroomed across the country since U.S. forces began their withdrawal following a peace deal signed in February 2020, making it difficult for buyers and sellers to commute and connect.

Said Eshaq, owner of a secondhand gym equipment business in Kabul, said his operation has been largely unaffected by the withdrawal. But declining security has had a negative impact on foot traffic.

"People have lost their incomes and jobs due to years of conflict," he said. "The security has also worsened since the Americans began withdrawing troops."

Abdal Jameel, a junkyard owner in Bagram who has been in the scrap business for 9 years, echoed the sentiment. "People were hoping that the Americans would make the country more peaceful and stable. But we have lost all hope," he said. "The number of customers has sharply decreased since the Americans announced their departure from Afghanistan."

His customers came from Kabul, Kandahar and Mazar to buy iron and parts. However, with the Taliban expanding across the country, people are scared to come to Bagram to sift through the leftovers. "There is also an increase in the number of robberies and thefts along the highways," he said. "Rumors that Taliban will eventually come here has scared many people."

The ill effects of poor security and the ongoing conflict spilled over to Eid-al-Adha celebrations. Sheep and cow sales were down at least 10% to 20% from usual levels, locals said. A seller from southern Afghanistan made the perilous journey to Kabul to sell his sacrificial animals ahead of Eid on July 19. (Photo by Kanika Gupta)

Amanullah, a 46-year-old livestock farmer, had traveled all the way from the Takhar's Rustaq district bordering Badakhshan and Tajikistan to sell his livestock in a makeshift market in Kabul. However, he is going back home without earning any profit from his sales.

"I brought 40 cows and 60 sheep from Takhar to sell in Kabul today. But I made no profit because we have to pay 200 Afghanis per animal to the Taliban."

Abdul Himmat, who works for the Ministry of Mines and Petroleum, went to the market to buy sheep and believed there were far too many sellers than buyers this year.

"These days we don't have any security," he said. "That is the reason buyers are unable to come and buy the animals they want. This is all because of the Americans leaving the country."

The first day of Eid-al-Adha in the capital was also marred by a rocket attack aimed at the presidential palace during prayers.

Meanwhile, peace talks in Doha between the Taliban and the government ended without a cease-fire agreement. A July 18 joint statement by diplomatic missions in Kabul said "the Taliban's offensive is in direct contradiction to their claim to support a negotiated settlement of the conflict and to the Doha peace process."

The withdrawal of U.S. and NATO forces from Afghanistan was followed by the Taliban making huge territorial gains in several parts of the country, overrunning districts and overwhelming Afghan forces. Afghan security forces inspect a demolished vehicle at the site of a car bomb blast in Kabul on Aug. 4.   © Reuters

According to Long War Journal, the Taliban now commands 139 of 400 districts in less than two months since Biden's withdrawal announcement.

Gen. Mir Asaduallah Kohistani, the new commander of Bagram Airfield, however, is confident the government will be able to reclaim lost territory by launching an offensive against the Taliban. "We are living in a country that has witnessed four decades of war," he said. "But we are very sure our offensive will help us take back the cities that are economically and strategically important."

Mohammad Ashraf, a business owner from Kabul who was rummaging about for an iron casting machine in the Bagram junkyard, is much less sanguine. He feels uneasy about the government's claim to have a handle on the security situation. When asked whether he trusted the security arrangements made by the Afghan army and the police, he said they are lying.

"Our business has gone down. Highways are no longer safe," Ashraf said. "Security has become so bad that we fear losing everything to the robbers."