A Taliban fighter sits on the back of a vehicle with a machine gun in front of the main gate leading to the Afghan presidential palace in Kabul on Aug. 16.   © AP
WAJAHAT KHAN and RYO NAKAMURA, Nikkei staff writersAugust 17, 2021 02:29 JSTUpdated on August 17, 2021 06:54 JST | Afghanistan
CopyCopied

NEW YORK/WASHINGTON -- The United Nations Security Council demanded an end to the violence in Afghanistan and the protection of the rights of women and girls Monday, while China blamed the U.S. military's departure for the Taliban takeover.

The emergency meeting represented the first opportunity for the international community to react to the collapse of the U.S.-backed government in the central Asian country.

China, a permanent member of the international body, also stressed the importance of Afghanistan not reverting to a terrorists' sanctuary and expressed hope that the Taliban will deliver on their commitments and make a "clean break" with terrorist organizations.

"Afghanistan must never again become a haven for terrorists," he said. "This is the bottom line that must be held firmly for any future political solution in Afghanistan." He called for the Taliban not to allow the likes of the Islamic State, al-Qaida and the East Turkestan Islamic Movement to use Afghanistan as a base for their activities.

Beijing has maintained good relations with the Taliban but is concerned about Islamic extremists pouring into its Xinjiang Uygur Autonomous Region, which borders Afghanistan. Chinese Foreign Minister Wang Yi met with Taliban officials in July, and after the Taliban took control of Kabul on Sunday and declared the war in Afghanistan over, the Chinese Foreign Ministry expressed appreciation Monday for the Taliban's declaration and said Beijing hopes for a "smooth transition" of power.

Meanwhile, Russia staked its own claim, saying it will keep its embassy in Kabul operational and keep doing business with the Taliban.

"As regards our future official steps, our official steps, regarding the Taliban, we will interact with them irrespective of the evolving situation and their specific actions," said Vassily Nebenzia, the Russian ambassador to the U.N., at the Security Council gathering.

That "evolving situation" Nebenzia is the humanitarian crisis evolving in Afghanistan, concerns about which dominated the meeting as countries recalled the Islamic militant group's first rule of the country in the 1990s, when girls were barred from receiving an education. An Afghan girl stands in line with her mother to get a food package on the outskirts of Kabul in 2010.   © Reuters

"I call on this council to stand with the women of Afghanistan," said Geraldine Byrne Nason, Ireland's U.N. ambassador. "Their rights and their future participation in Afghan society cannot be sacrificed."

"We condemn in the strongest terms the deliberate targeting of women and girls by the Taliban," she said. "Girls must be free to attend school. Women must be able to participate fully in society, and those who speak up for human rights must be free to do so."

"The following days will be pivotal," U.N. Secretary-General Antonio Guterres said. "The world is watching. We cannot and must not abandon the people of Afghanistan."

The women and girls of Afghanistan fear "a return to the darkest days," he said.

The Security Council issued a statement calling for "an inclusive ... realistic political settlement that upholds human rights, including for women, children and minorities."

The Taliban have promised to restore "normal life" in the country. Mullah Abdul Ghani Baradar, the head of the Taliban's political office, said in a video message to the group's members that it is time to show "humility" and that the Taliban will be tested on "how we serve and secure our people, and ensure their future and good life to the best of our ability."

Taliban spokesperson Shail Shaheen promised "peace" in the war-ravaged country in a call he made to Afghan-born BBC anchor Yalda Hakim while she was live on the air.

"There should not be any confusion. ... We assure the people of Afghanistan, especially in the city of Kabul, that their properties, their lives, are safe," he said. "There will be no revenge on anyone. We are the servant of the people and of this country."

But at the U.N. Security Council, Norwegian Deputy Ambassador Odd-Inge Kvalheim said that "the Taliban will be judged not by their words, but by their actions in the days, weeks and months ahead." 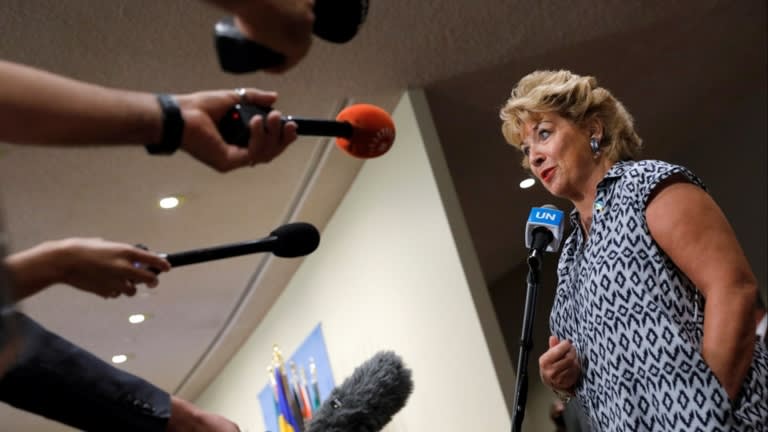 Ireland's ambassador to the United Nations, Geraldine Byrne Nason, speaks to reporters before a Security Council meeting on Afghanistan at the U.N. on Aug. 16.   © AP

Pakistan's ambassador to the U.N., Munir Akram, who was not allowed to participate in the Security Council session for a second time in a row by rival India, which is presiding over the meetings, questioned why the Afghan ambassador was allowed to speak.

"At this moment, it's very unclear who he represents," Akram said.

"The president who signed his papers has fled," he said. "So the question arises: Who does he represent? I hope he will ... continue to represent the new authorities," but that's for the Afghan authorities to determine, he said.

"It's a bit of a limbo, this situation," Akram said.

The crowds flooding Kabul's airport and desperately trying to board aircraft are part of the denouement of "America's longest war." The Taliban's occupation of the presidential palace Sunday brought Washington's two-decade "war on terror" back to square one in many ways.

The conflict was set in motion two decades ago with the Sept. 11 terrorist attacks and the identification of al-Qaida leader Osama bin Laden as the mastermind soon thereafter. Afghanistan's Taliban leadership rebuffed then-U.S. President George W. Bush's demands to hand over bin Laden, leading to the decision to invade.

The Taliban were officially removed from power that December amid a show of overwhelming military force. Washington and NATO allies remained in Afghanistan to mop up Taliban forces scattered across the country and to support the transition to democracy.

Brown University estimates that the two-decade war cost the U.S. at least $2.26 trillion and the lives of more than 2,400 American military personnel, contributing to a sense of public fatigue with the conflict. Over 40,000 Afghan civilians have died, by some estimates.

Last year, then-President Donald Trump's administration signed a peace deal with the Taliban to end the war and pledged to pull out U.S. troops, and now the Biden administration has followed through. The fall of Kabul, which U.S. officials had said could come within six months of the end of the withdrawal, happened far faster.

As the Taliban have brought more territory under their control, they have released sympathizers detained by the Afghan government.

According to Axios, the group released thousands of prisoners Sunday from Bagram Air Base in northern Kabul, which had reportedly held 5,000 to 7,000 criminals and terrorists, including senior al-Qaida operatives. The move could lead to Islamic extremist groups becoming a renewed global threat.

Mark Milley, chairman of the U.S. Joint Chiefs of Staff, told senators Sunday that terrorist organizations like al-Qaida may regroup in Afghanistan sooner than expected, according to CNN.

Defense Secretary Lloyd Austin had said in a June congressional hearing that international terrorist organizations like al-Qaida and the Islamic State could pose a threat to the U.S. homeland or allies within two years. The fall of the Afghan government could move up that timeline.

Washington's relationship with the Middle East and West Asia has changed significantly in the last two decades. The shale oil boom has turned the U.S. into a net oil exporter, reducing its reliance on Middle Eastern oil. Efforts to address the wealth inequality and corruption that have contributed to instability in Afghanistan and Iraq have been allowed to fall by the wayside.