GENEVA/BEIJING/NEW DELHI -- United Nations members have pledged more than $1.2 billion in aid to Afghanistan to tackle the humanitarian crisis there, but many countries remain hesitant about supporting the country at the risk of legitimizing Taliban rule.

The halting of aid from the International Monetary Fund and the World Bank have pushed the economy of one of the world's poorest nations into a deep paralysis, made worse by a lack of economic policymaking in the month since the Taliban seized Kabul.

A dire shortage of cash has forced banks to stop operating or limit withdrawals and sent inflation skyrocketing. Uncertainty and economic pain are among the factors that have pushed more than 100,000 people out of the country.

The pledges came from 96 countries participating in a Monday meeting in Geneva regarding the U.N.'s "flash request" for $606 million to see the country through the last four months of the year.

But emergency aid "will not solve the problem if the economy of Afghanistan collapses," Secretary-General Antonio Guterres said, pointing to the cash crunch. Roughly $10 billion in foreign assets held by Afghanistan's central bank abroad have been frozen, mainly by the U.S.

Afghanistan's poverty rate, now as high as 72%, could reach 97% by mid-2022, according to the U.N. Development Program. One in three Afghans do not know where their next meal will come from, the U.N. says.

Prospects for improvement under a Taliban government look slim.

"The Taliban are demanding that farmers provide three good meals a day, with meat, for free," said a tribal leader near the Tajikistan border, in a state with many poor farmers growing mainly wheat and rice. The group has also begun claiming 10% of farmers' income.

"Life is getting harder under Taliban rule. A lot of people have fled outside the country," he said. 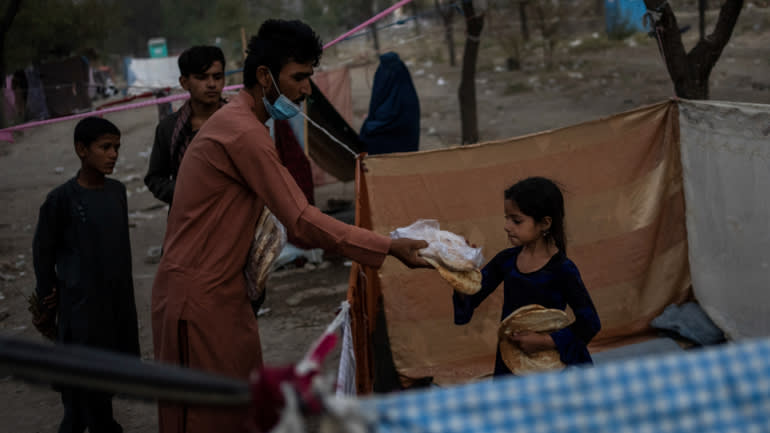 One in three Afghans do not know where their next meal is coming from, according to the United Nations.   © AP

Fitch Solutions downgraded its growth forecast for Afghanistan last month from a 0.4% expansion to a 9.7% contraction this fiscal year, and projects a further drop in fiscal 2022, citing the loss of international support and the risk of hyperinflation from a weakening currency.

While ministries under the "caretaker" administration began operating last week, the information and culture ministry reportedly is only about 70% staffed -- a situation not helped by the Taliban's continued enmity toward members of the old government.

But Guterres stressed that Taliban cooperation is vital to provide aid, and said they have offered to support these efforts.

The group, in a bid to win over the international community, had promised to respect women's rights and ensure the safety of those involved in the old government, but there have already been many reports of violence by the group against Afghans.

And the lineup of top officials announced last week included a minister on the FBI's most-wanted list and others under U.S. sanctions, while featuring no women or minorities.

These developments have not encouraged Western countries to open their wallets, as concerns remain that negotiating with the Taliban on large-scale economic support or unfreezing of assets could lead to the eventual recognition of its government.

"Words are not good enough. We must see action," said Linda Thomas-Greenfield, the U.S. ambassador to the U.N.

The $64 million in aid announced by the U.S. has met skepticism at home.

"Is it the policy of the United States of America to take hard-earned tax dollars and pay terrorist organizations?" Rep. Scott Perry asked Secretary of State Antony Blinken in a House Foreign Affairs Committee hearing. Blinken responded that the money will go to nonprofit organizations and U.N. agencies.

Meanwhile, neighboring Pakistan has moved quickly to fly relief goods to Afghanistan. Qatar -- which, like Pakistan, is in close contact with the Taliban -- has urged the international community to provide support with "no strings attached."

Beijing is also taking steps through the Shanghai Cooperation Organization, which includes Russia and Central Asian countries. The bloc is set to hold a two-day summit starting Thursday in Tajikistan, with Chinese President Xi Jinping expected to attend virtually.

China is engaging with the Taliban and supporting Afghanistan's recovery in part to avoid instability that could send Islamic extremists across its border into Xinjiang. The People's Liberation Army is participating in joint anti-terrorism exercises in the southern Russian region of Orenburg that began Sunday.