Europe split over Afghan refugees has echoes of 2015 crisis ATHENS, Greece -- The Syrian refugee crisis of 2015 stretched the European Union close to the breaking point. Now a potential new wave from Afghanistan is creating similar ructions in the 27-nation bloc.

The United Nations is warning that up to 500,000 Afghans may be forced to flee their homeland by the end of the year. Braced for this, the EU is stressing that it is better prepared than six years ago, when a record 1.3 million people applied for asylum within the bloc.

"It is true that we are now in a major crisis," European Commission Vice President Margaritis Schinas told Austrian daily Wiener Zeitung on Saturday. Although the EU did not create this situation, he said, it is once again "called upon to be part of the solution."

Schinas added that Europe needs to heed a call to "avoid a reflex that takes us back to the crisis year, 2015, before it is even clear how the situation will develop."

While Brussels is insisting that the policies of individual nations are converging, Schinas said it was high time "to agree on a common European migration and asylum policy." 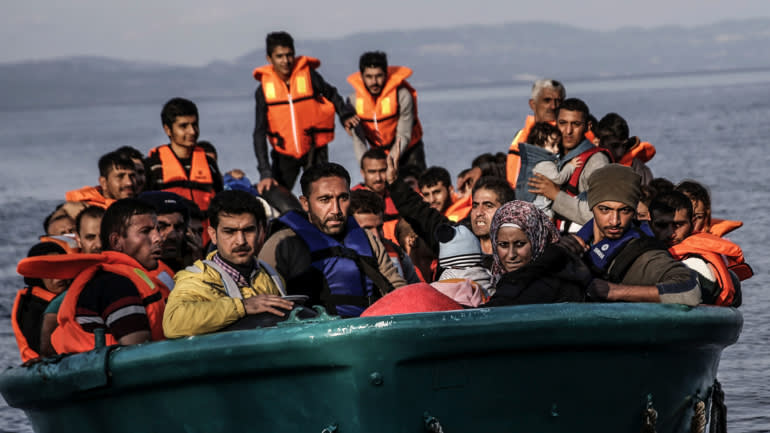 Refugees and migrants from Syria arrive on an overcrowded boat on the Greek island of Lesbos in 2015.    © Reuters

If the 2015 crisis is any indicator, squabbles between member states over immigration policy are likely to become even nastier. Last week, Luxembourg's Foreign and Immigration Minister Jean Asselborn hit out at Austria's refusal to take in Afghans, and asked publicly for stronger resettlement commitments. He was immediately rebuked by Berlin and Vienna.

The EU's two most powerful countries are also set to elect new heads of state: Germany picks its new government and chancellor later this month, and France will hold a presidential election in April. The Afghan refugee issue is sure to feed into both races.

Armin Laschet, the Christian Democratic Union candidate to succeed Angela Merkel as chancellor, warned last week that there must be "no repeat" of the migration crisis of 2015. In France, the tune is eerily similar, from the far right to the center-right of the political spectrum.

The outcomes of these two political battles will define how the EU deals with any potential crises, migratory or otherwise. Schinas has said the differences between some member states are irreconcilable, with strong opposition to deals among the "the populists on the right and left fringes."

The EU has little leverage in war-torn Afghanistan. Josep Borrell, the EU's top diplomat, said last week there might be "operational engagement" with the new regime, without any formal recognition for the time being. The caveat, he said, was this would only happen if the Taliban "respects 'human rights, especially those of women," and if it sets up an "inclusive" government.

Jan Egeland, secretary-general of the Norwegian Refugee Council, told Nikkei Asia that concerns in Brussels about a big influx of Afghans to Europe are "not a given."

"Nine in 10 Afghans who have fled their homeland over the past four decades are sheltering in Iran and Pakistan," he said. "We expect these historical patterns to continue. How many will give up Afghanistan and leave will depend on the nature of Taliban rule and whether conflict will continue, but also on whether there will be sufficient humanitarian aid and a system for keeping public services like schools and health care afloat."

"World donors must support Afghanistan, as well as its neighbors, and help them keep their borders open," Egeland added. "Just because this crisis will not be in European back gardens does not mean we should wash our hands of it."

Taking a very different view is Hungarian Prime Minister Viktor Orban, an ally of former U.S. President Donald Trump. Orban insists that people wanting to leave Afghanistan must stay in neighboring countries -- as far from Europe as possible. For him, Brussels must set a clear goal, "to send assistance there, not bring trouble here."

Orban is not the only European politician with a worldview similar to Trump's. While Italian Foreign Minister Luigi Di Maio insists that Rome and other European capitals want to help Afghanistan's neighbors handle refugee flows, he cannot conceal his real sentiments.

"We have to manage what could become a mass exodus towards Europe, we must avoid this," Di Maio said before embarking on a tour of the region that will take him to Uzbekistan, Tajikistan, Qatar and Pakistan. People from Afghanistan arrive with their belongings at the Friendship Gate crossing point in the Pakistan-Afghanistan border town of Chaman, Pakistan on Aug. 27.    © Reuters

In Athens, Nasruddin Nizami, a 36-year-old Afghan expatriate who has lived in Greece for 11 years told Nikkei that his home country is "going from the light back to the darkness." He fears that events in Afghanistan will again fuel racism and resentment toward his compatriots in Europe. Some people will claim that all Afghans" are Taliban," he said.

Nasruddin should know. In 2019, he was attacked and stabbed in the street by supporters of Golden Dawn, a now-outlawed Greek neo-Nazi political party.

Some Afghan refugees are already stuck in limbo between European states. According to Amnesty International, 32 Afghans are stranded at the Polish-Belarus border after Polish authorities refused them entry.

"They have been stranded for weeks without adequate shelter, food, water and medical care," the human rights group said. "Polish and Belarusian border guards have kept them in a strip of land at the border, limiting their access to lawyers, humanitarian, and health care workers."