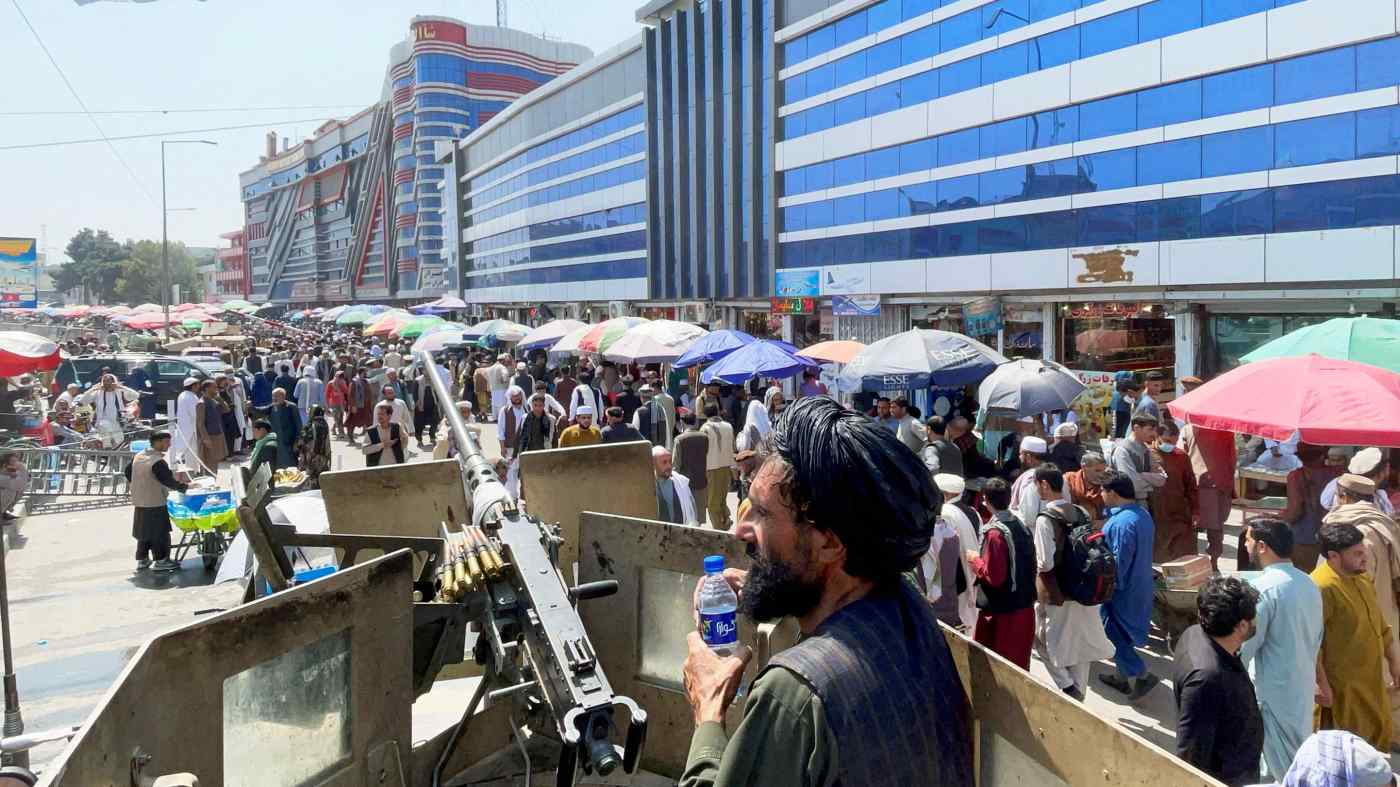 Members of Taliban security forces stand guard as crowds of people walk past in front of a money exchange market in Kabul on Sept.4.   © Reuters
September 5, 2021 17:01 JST | Japan
CopyCopied

TOKYO (Kyodo) -- Foreign ministers of the Group of Seven industrialized nations as well as China and Russia will join multilateral talks to be held possibly Wednesday to discuss the crisis in Taliban-controlled Afghanistan following the withdrawal of U.S. forces, a Japanese minister said Sunday.

Beijing and Moscow are expected to be among participants in an online ministerial meeting on Afghanistan grouping together more than 20 countries, which U.S. Secretary of State Antony Blinken has said he will co-host with German counterpart Heiko Maas.

Foreign Minister Toshimitsu Motegi said on an NHK television program the G-7 countries have agreed to demand the Taliban ensure safe evacuation of those wishing to leave the conflict-ravaged country, sever ties with terrorist organizations and respect women's rights.

Motegi said it will be important to apply pressure to Afghanistan "together with China and Russia, which have a certain influence" over the country.

The minister also said the Japanese government will dispatch a representative to Doha this week to hold negotiations with the Taliban and continue efforts to evacuate some 500 Afghans, including local staff of the Japanese Embassy and the Japan International Cooperation Agency and their families, left behind in the country.

Last Wednesday, Tokyo moved the temporary office it had set up in Istanbul as a substitute to the closed embassy in Kabul to the Qatari capital, which hosts a Taliban political office.

Motegi said Tsukasa Uemura, former Japanese ambassador to Saudi Arabia, will be sent to Doha as the representative.

A senior Taliban official requested support from Tokyo during a meeting Saturday with Takashi Okada, Japanese ambassador to Afghanistan who heads the Doha office, saying the country lacks food, drugs and medical services, the minister said.

As for evacuation efforts, Motegi said Japan will explore the possibility of assisting their exits to neighboring countries through land routes.

The Taliban returned to power on Aug. 15 for the first time in about 20 years before the United States completed the withdrawal of its troops from Afghanistan later that month, bringing an end to two decades of war triggered by the terror attacks of Sept. 11, 2001, on U.S. soil.

The militant Islamist group harbored the al-Qaida organization, responsible for the 2001 terror attacks, and suppressed women's rights during its former rule between 1996 and 2001.