A sniper keeps a watch from the roof of the parliament building in Kabul before Afghan President Ashraf Ghani arrives on Aug. 2.   © Reuters
Afghanistan turmoil

In Pictures: Afghanistan at a crossroads

Taliban offensive rolls on as US nears withdrawal deadline

NEW YORK -- The situation in Afghanistan remains turbulent as the U.S. nears the completion of its removal of combat forces by the Aug. 31 deadline President Joe Biden set last month.

A day after U.S. Secretary of State Anthony Blinken reiterated a continued engagement with Afghanistan despite the withdrawal, an explosion and gunfire struck near Kabul's Green Zone. Meanwhile, the Taliban continued to make gains in their offensive throughout the country.

Here are some scenes from Kabul to the embattled southern province of Helmand to Washington.

Afghan special forces patrol the southern province of Helmand. The Taliban reportedly captured nine out of 10 districts of the provincial capital of Lakshar Gah on Tuesday. The fall of the city would mark a turning point in the current Taliban offensive. An Afghan police officer keeps watch at a checkpoint on the outskirts of Kabul in July. The Taliban continue to make gains throughout the country but may seek negotiations for a new government before mounting any campaign to take over the capital. 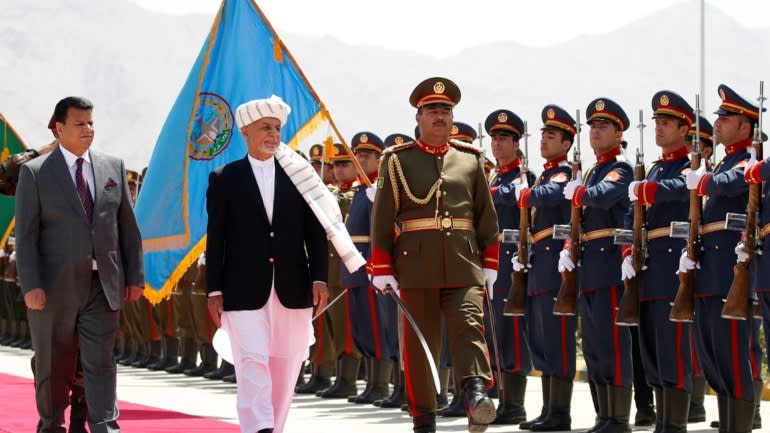 Afghan President Ashraf Ghani, middle of three walking, arrives at the parliament in Kabul on Monday. The Taliban demand to negotiate a new government in Kabul along with the removal of Ghani.

Members of the Afghan parliament listen to Ghani's speech on Monday. A Taliban spokesperson has said women will be allowed to work, attend school and participate in politics but will have to wear head coverings. 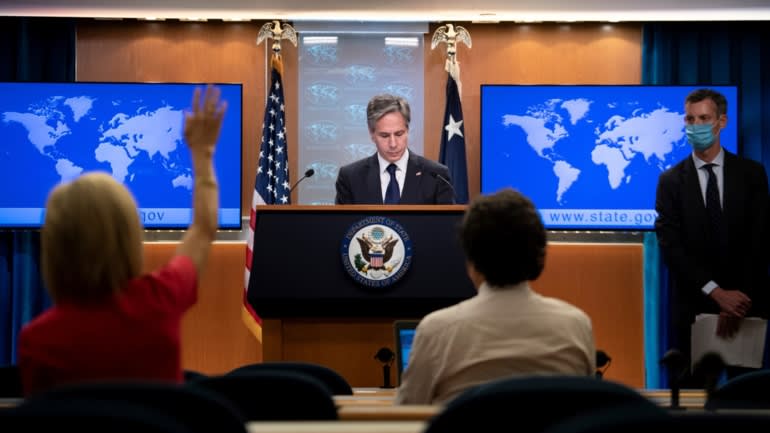 U.S. Secretary of State Antony Blinken addresses the growing concerns of a refugee crisis in a news conference ins Washington on Monday, stating that the U.S. is expanding its Afghan refugee program. Taliban co-founder Mullah Abdul Ghani Baradar, left, and Chinese Foreign Minister Wang Yi meet on July 28 in Tianjin, China. Ties between China and the Taliban have strengthened in the wake of the U.S. withdrawal as Beijing looks to keep a lid on the security situation in its southwestern neighbor.

Afghan army special forces attend a graduation ceremony in July. The U.S. has provided Afghanistan roughly $4 billion in security aid yearly, and the U.S. and NATO have pledged to continue that funding through 2024.

An Afghan soldier plays a guitar left behind after the American forces departed Bagram Airfield in July. Bagram was the hub of the U.S. mission in Afghanistan for nearly 20 years.