NEW DELHI -- The sudden seizure of war-torn Afghanistan by Taliban insurgents amid the withdrawal of United States forces presents a quandary for India, which had cultivated good relations with the former Ashraf Ghani government but has neither engaged nor granted global legitimacy to the hard-liner group.

"At the moment we are, like everybody else, very carefully following developments in Afghanistan," said External Affairs Minister S. Jaishankar, who was on a trip to the U.S. "I think our focus is on ensuring the security in Afghanistan and the safe return of Indian nationals who are there."

Last week, India had rushed back home its ambassador to Afghanistan Rudrendra Tandon and 150 people, including top diplomats, officials, security personnel and some stranded Indians following escalating tension in the Afghan capital Kabul, said a source at the MEA.

An Indian Air Force plane was used to conduct the secret evacuation involving a convoy of 14 bulletproof cars, which transported the evacuees from the Indian embassy building to Hamid Karzai International Airport amid thousands scrambling to leave the country, and the tarmac overrun by desperate Afghanis blocking planes from taking off or landing, the source added. 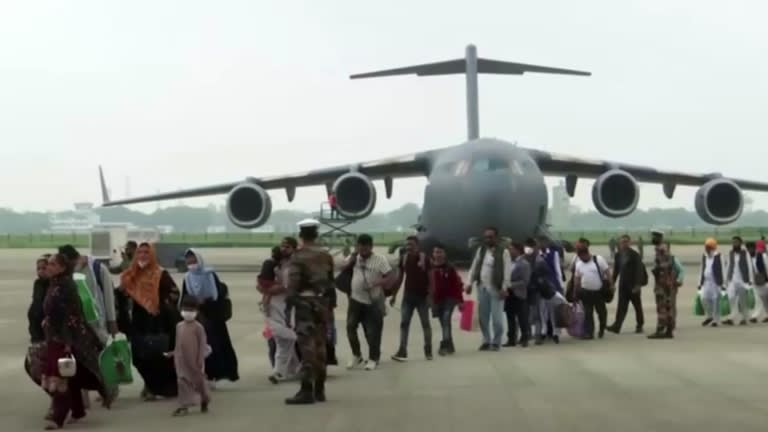 People evacuated from Afghanistan get off a plane in Ghaziabad, India on Aug. 22.   © Reuters

Thousands of other Afghan nationals are currently seeking to flee the country and have applied for visas from the Indian Embassy in Kabul. Among them are those who have studied or worked in India, have relatives there, or whose lives are endangered by the Taliban.

However, while the MEA has made a statement on its commitment to facilitate repatriation of the "Hindu and Sikh minorities" in Afghanistan, it is non-committal on whether it will welcome all Afghans, including Muslims, as India has done on previous occasions. Apart from some 15,000-odd Afghani immigrants settled in India, there are thousands of Afghan Muslims in Afghanistan as well who helped India take on the Taliban.

This selective, religion-based outreach by India has therefore invited criticism of Prime Minister Narendra Modi's government, especially after Jaishankar announced that India had a "historical relationship with Afghan people."

"Imagine India is asking fleeing Afghans, Hindu or Muslim?" said one critic on Twitter. "Why does the Modi government get religion into everything? Religion should have nothing to do with urgent humanitarian efforts required in these catastrophic times," remarked another. 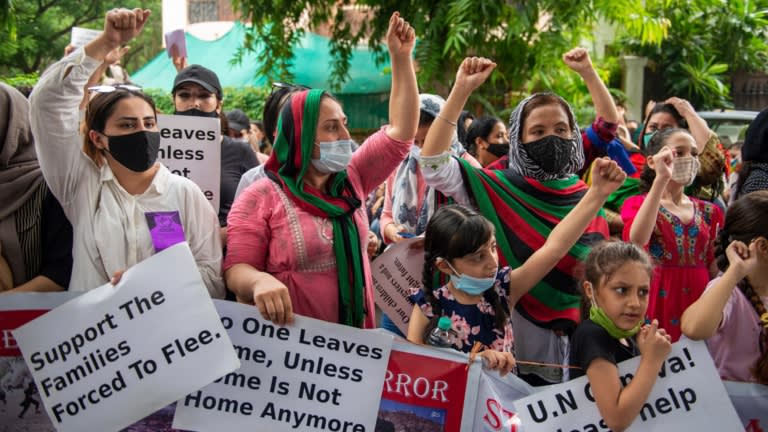 Apart from repatriation, New Delhi is "also working with various international agencies, stakeholders in Afghanistan and its democratic partners in the region to assess how to engage with the new Taliban regime as recognizing the latter and giving it legitimacy will be a difficult step for us," said another MEA source.

The source pointed out that following last week's discussions in Doha among 12 countries including India, U.N. representatives and Afghan representatives, a nine-point statement was issued that the group will "not recognize any government in Afghanistan that is imposed through the use of military force."

Given this backdrop, foreign policy experts, say India is adopting a wait-and-watch strategy to see how things evolve in Afghanistan.

"We're currently clueless about what the new government in Afghanistan will look like, and which organizations will be in power," said Ashok Sajjanhar, India's former ambassador to Kazakhstan, Sweden and Latvia. "The Taliban is not a monolith but an umbrella organization with various factions like Lashkar-e-Taiba, Al Qaeda, the Haqqani Network and more," he said, adding that "Given their multiplicity, they will also demand a piece of the cake."

The diplomat noted that the new government's policy declaration regarding protection for women, education for girls and human rights is still unclear, and "will be instrumental in how we deal with them." 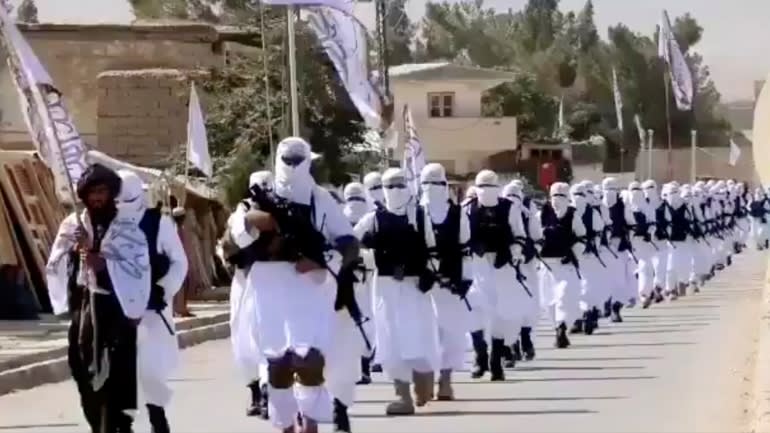 "The Taliban promised women's rights and media freedom at their first press conference in Kabul but this seems like a PR stunt; a facade to put forth a moderate face to the world. Their duplicity immediately became apparent when they started defacing women's faces on posters across the country."

According to Sajjanhar, a big concern for New Delhi will be whether the new regime will allow the country to be used to harbor terrorists. "We have heard from Taliban leaders that Kashmir is our 'internal matter' but it's still too early to say whether they will follow this stance of non-interference in reality or not."

What will also be vital to India, Sajjanhar said, is the takeover of Afghanistan's assets by the Taliban. "India has invested about $3 billion in over 400 high-impact community development projects across all of Afghanistan's 34 provinces. Their fate is undecided."

These include the 42-megawatt Salma Dam and the Afghan-India Friendship Dam project in Herat Province, as well as the $150 million Zaranj-Delaram highway, a 218-km road near the Afghanistan-Iran border that provides access to Iran's Chahabar port as well. There is also the Afghan Parliament building, into which India pumped $90 million.

However, others feel that India should not be too preoccupied with Afghanistan given its much wider foreign policy. "Afghanistan, while being a strategic partner, isn't a top priority in our foreign policy matrix because we don't share a border with it nor do we have a huge amount of trade going on with it," explained Kanwal Sibal, a former foreign secretary.

What is of greater concern, he added, is how the Pakistan-China dynamic will play out. "China will try to consolidate its hold in the war-ravaged country given its enormous mining wealth, among other things. There's a possibility that Pakistan might connive with it to embolden terrorist organizations that create trouble for India."

In case this happens, added Sibal "we should be ready to liaise with the Americans to put pressure on Pakistan -- through economic sanctions via the Financial Action Task Force -- or press other buttons to make it see reason."