KARACHI -- With the U.S. departed in disarray, Afghanistan's newly ensconced Taliban regime is looking to China for major investments in the coming six months, but experts expect Beijing to tread a very cautious line.

Zabiullah Mujahid, the Taliban spokesperson, said earlier this week that the new government wants to join the China-Pakistan Economic Corridor, or CPEC, the flagship $50 billion Pakistan component of China's Belt and Road Initiative.

A source with close links to the Taliban told Nikkei Asia on condition of anonymity that China has been courting the Taliban since 2018 on possible projects in Afghanistan. "There are verbal agreements between Beijing and Taliban about investments," he said. "Once the Taliban government gains global recognition, China will start building infrastructure projects in war-torn Afghanistan."

The source expected China to be not much concerned about human rights -- with those relating to women and girls most in jeopardy -- and to be more focused on effective governance and dealing with Uyghur militants.

"The situation in Afghanistan remains complex and fluid," Qureshi later tweeted. "We hope the political situation stabilizes leading to normalcy soon. The new reality requires us to discard old lenses, develop new insights and proceed with a realistic, pragmatic approach," he said.

During the meeting, China promised emergency aid of $31 million to Afghanistan, including grain, winter supplies, vaccines and medicines. "What China can do now is maintain necessary contacts with the Taliban in the fields of normal economic activities and people-to-people exchanges," reported Global Times, Beijing's English-language mouthpiece. 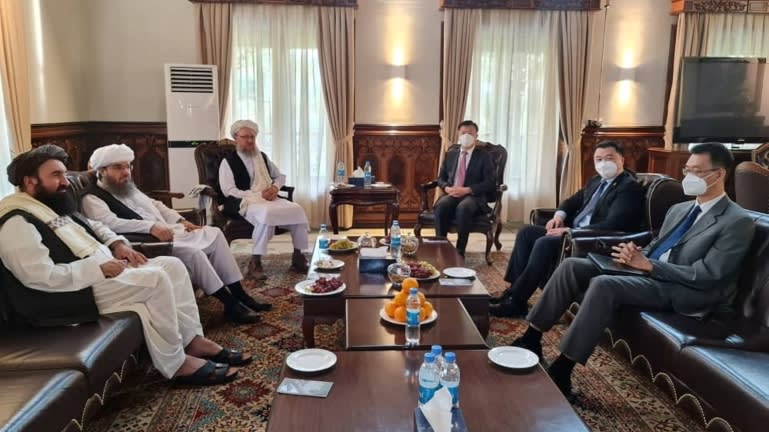 "Beijing will be happy to dangle promises and engage in talks on the BRI and CPEC extensions, but will not move ahead with anything on the ground until they are confident of political and security conditions," Small told Nikkei.

Experts note the Taliban's limited investor choices. "It is to be expected that China would be willing to help the Taliban government after the U.S. pulled out of a region that is too important for China to leave alone," Hasaan Khawar, a public policy analyst in Islamabad, told Nikkei.

China is well aware of Afghanistan's vast mineral resources that include the Mes Aynak copper mine, which is reputed to be the second-largest in the world in terms of reserved volume. China Metallurgical Group bought the exploration lease on the massive deposit in 2008 for $3 billion, but work has been stalled for more than a decade because of security concerns. The idle mine is a salutary reminder to China of how big investments can easily fail in such an unstable setting.

"Copper is essential for electric wiring, electronic products, motors and many other products manufactured in China," Jeremy Garlick, assistant professor of international relations at the University of Economics in Prague, told Nikkei. "The Chinese will not rush to put their heads in the lion's mouth -- I would expect them to weigh any decision to get more deeply involved in Afghanistan carefully." 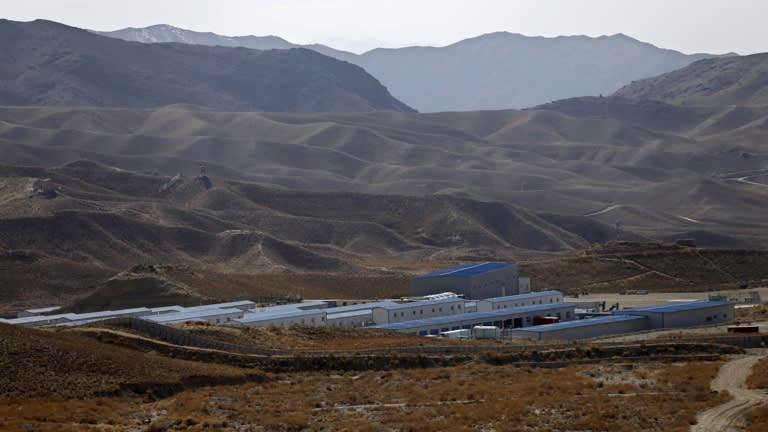 Chinese excavation equipment and engineers quartered at the massive Mes Aynak copper deposit in Logar Province in 2015. Exploration has been halted for a decade because of security concerns.    © Reuters

The problem of militancy and the use of Afghan soil as a launchpad for global terrorism is the biggest concern for the global community, including China. Experts believe that unless the Taliban controls this problem, China will be unable to invest -- however much it wants to.

Small said that China does not want a Taliban-run Afghanistan to be an interconnected hub for the region if it is a permissive environment for militants. "China has already been concerned about the deteriorating security conditions for CPEC, and has major questions right now about how the Tehrik-i-Taliban Pakistan may be emboldened and bolstered by the Taliban's victory," said Small.

Meanwhile, Pakistani government officials have welcomed the Taliban's desire to become part of CPEC. Sheikh Rashid Ahmed, the interior minister, said in a press conference on Tuesday that the progress of Pakistan and Afghanistan was interlinked.

However, some believe Pakistan needs to be cautious about allowing CPEC to be extended to Afghanistan. "Pakistan struggles with internal stability and terrorism -- expanding CPEC to Afghanistan would add to Pakistan's risk burden," said Garlick, the author of The Impact of China's Belt and Road Initiative: From Asia to Europe.

Garlick believes another brake on Chinese-Taliban relations is the recent slow implementation of CPEC projects in Pakistan.