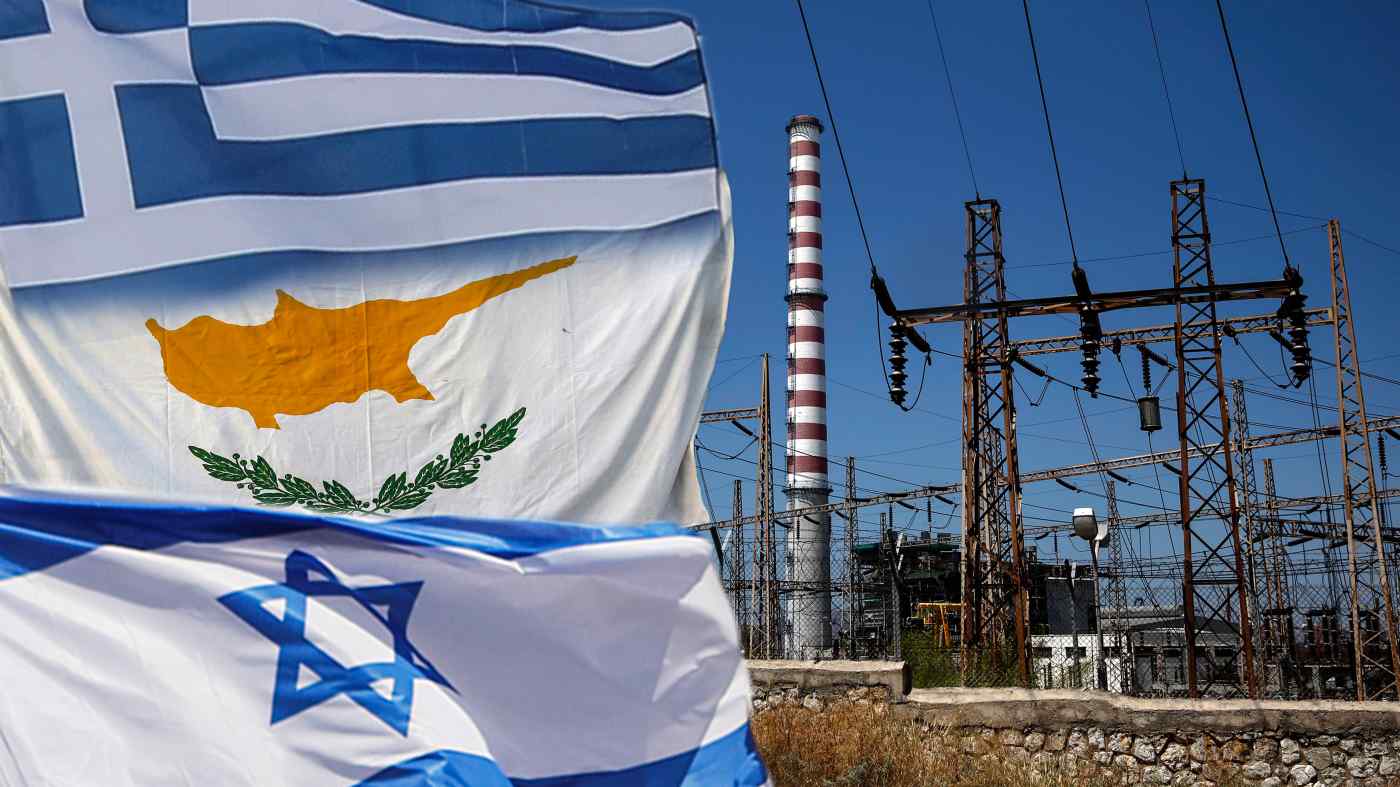 Greece, Cyprus and Israel intend to connect their power grids in a way advocates say might foster the use of renewable energy. (Source photos by Reuters)
GIANNIS SEFERIADIS, Contributing writerNovember 25, 2020 16:33 JST | Europe
CopyCopied

ATHENS -- A megaproject that promises to let electricity flow between Europe and Western Asia has the EU concerned about what China intends to do with a related project, while Turkey is worried about an alliance that might be taking shape against it.

The EuroAsia Interconnector would link the power grids of Israel, considered Western Asia, Greece and Cyprus with a 1,200-km subsea high-voltage transmission cable, one of the longest in the world if completed. It is to be partly funded by the EU, and Stage 1 is to cost 2.5 billion euros [$2.97 billion]. It is now slated for possible completion by December 2023.

As for the geopolitical intrigue, a Chinese concern with shareholdings in a Greek energy company has European officials wondering if China might be using a related deal as a Trojan Horse intent on galloping onto Europe's power grid.

The interconnector, which would be able to carry 2,000 megawatts of power, would also end Cyprus' energy isolation. The island nation is the only EU member not plugged into any European electricity supply.

George Markopouliotis, the head of the European Commission Representation in Greece, told Nikkei, "The interconnection of Cyprus will end the energy isolation of an EU member and thus enhance its [energy] security."

In June, Kostis Hatzidakis, Greece's environment and energy minister, and Yuval Steinitz, Israel's minister of energy, signed a joint declaration on energy cooperation in Jerusalem, vowing to enhance the two countries' energy security through this project.

Then last month, a meeting of the foreign ministers from Greece, Cyprus and Israel took place in Athens; it was dedicated to energy and regional security issues, showcasing their strategic alliance. 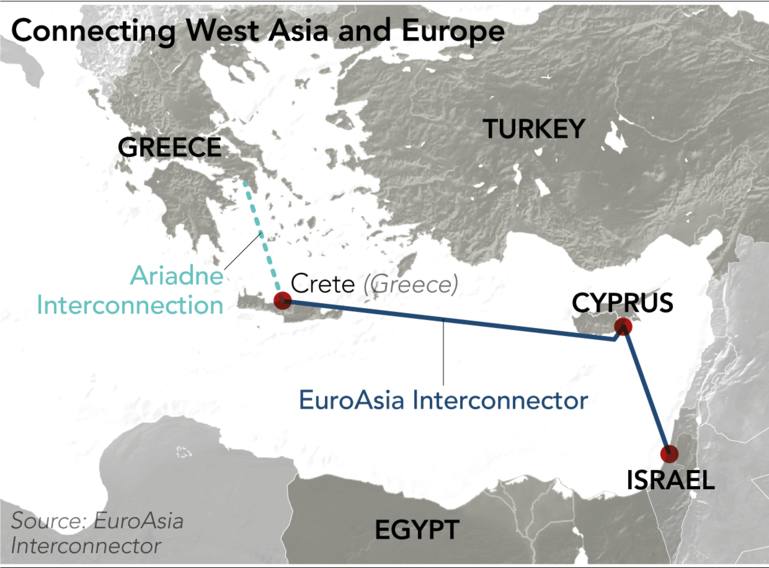 There is also talk of connecting the grids of Egypt and Cyprus via a EuroAfrica Interconnector.

The EuroAsia Interconnector's advocates say it can help to ease the way for the countries involved to shift to green energy sources.

Proponents say electricity interconnectors can help deal with intermittence, inherent in wind and solar power. With the ability to import electricity, advocates say, countries are able to increase the share of renewables in their electricity mix. Also, should renewables generate more electricity than needed, the power can be exported.

Government officials in each of the countries talk about the project in lofty tones.

"The benefits arising from the potential implementation of an Interconnector between Greece, Cyprus and Israel are very important," Kostis Hatzidakis, Greece's minister of environment and energy, told Nikkei Asia in an email. "Not only will it end the electricity isolation of Cyprus and Israel, but it will also unlock the renewable electricity potential of both states, as well as Greece, to meet their targets under the Paris Climate Agreement."

Israel's electricity isolation comes from being sandwiched between the Mediterranean Sea and Arab nations.

After Cyprus gained independence from the U.K. in 1960, violence erupted among the majority Greeks and minority Turks; following a coup d'etat by the island's Greeks in 1974, Turkey invaded northern Cyprus, saying it was protecting the island's Turks.

Disputes among Turkey, Cyprus and Greece intensified after the discovery of subsea natural gas fields in the region around 2009.

This summer, Greece and Turkey engaged in a war of words over maritime rights. Turkey dispatched a gas-exploration vessel that was escorted by navy ships as it conducted seismic surveys near a Greek island. Greece reacted by deploying its navy.

"For Cyprus, the project is crucial as it will finally bring an end to our island's energy isolation," Natasa Pilides, Cyprus' minister of energy, commerce and industry, told Nikkei. "Moreover, the interconnection will facilitate the priorities of the European Green Deal by contributing to the achievement of the 2050 climate neutrality and other environmental goals."

Meanwhile, Israel-Turkey relations have deteriorated since 2010, when a Turkish aid ship heading to Gaza was raided by the Israeli military. Israel has been accusing Turkey of supporting the Palestinian organization Hamas.

Israeli Energy Minister Yuval Steinitz told Nikkei via mail, "The trilateral partnership among Greece, Israel, and Cyprus has been the bedrock [of the East Mediterranean energy cooperation]."

The project has been marred by numerous delays. As a result, Greece has decided to sever one leg of the interconnection, between mainland Greece and the island of Crete. It will instead lay this cable as part of a national project. In 2018, a company called Ariadne Interconnection was created by the Greek Independent Power Transmission Operator (ADMIE) to extend the power grid to the island.

The initial plan was announced in 2012, but "delays have been announced six times to date," said Charles Ellinas, CEO of EC Cyprus Natural Hydrocarbons Company. "It is a scandal and a major setback."

According to Giorgos Stathakis, who once headed Greece's Ministry of Environment and Energy, the European Commission created obstacles to the interconnection between mainland Greece and Crete.

The EU wanted the Israel-Cyprus-Greece connection to continue as a single project and disputed the technical compatibility of high voltage transmission cables and the amortization of the investment.

"The [Ariadne] Interconnection couldn't wait," Stathakis said by phone. "Until 2018, the project had only progressed to study design. We had to step up [and decided to separate the project]."

European concerns about China strengthening its presence in Greece's energy market also caused delays. Ariadne Interconnection is a 100% subsidiary of ADMIE, which has State Grid Corp. of China as a stakeholder. It is this relationship that sparked the EU's skepticism.

Beyond increasing its stake in ADMIE, SGCC in November 2019 declared it wants a 20% stake in Ariadne Interconnection. It made its wish known while Chinese President Xi Jinping was visiting Athens.

China's involvement in the project is considered by many to be a Trojan Horse, a suspicion that is causing the EU's jitters.

Chinese investors are interested in other projects as well. In December 2019, Cyprus and a Chinese-led consortium signed a 290 million euro contract for the construction of the island's first liquefied natural gas receiving terminal. In October this year, Chinese companies expressed an interest in underground gas storage in Kavala, northern Greece.

Washington-based think tank The Atlantic Council estimates that China's Belt and Road energy investments will add up to $27 trillion by 2050, with $7 trillion alone going to power grid construction.

"Energy is considered a strategic issue of the EU," said Pablo Pareja-Alcaraz, a lecturer at the University of Pompeu Fabra, "and that's why there is this skepticism. If China is perceived in member state countries as an alternative, that weakens the EU position. China meddling goes to the core of European integration."