Both sides to refrain from targeting civilians, falling short of ceasefire 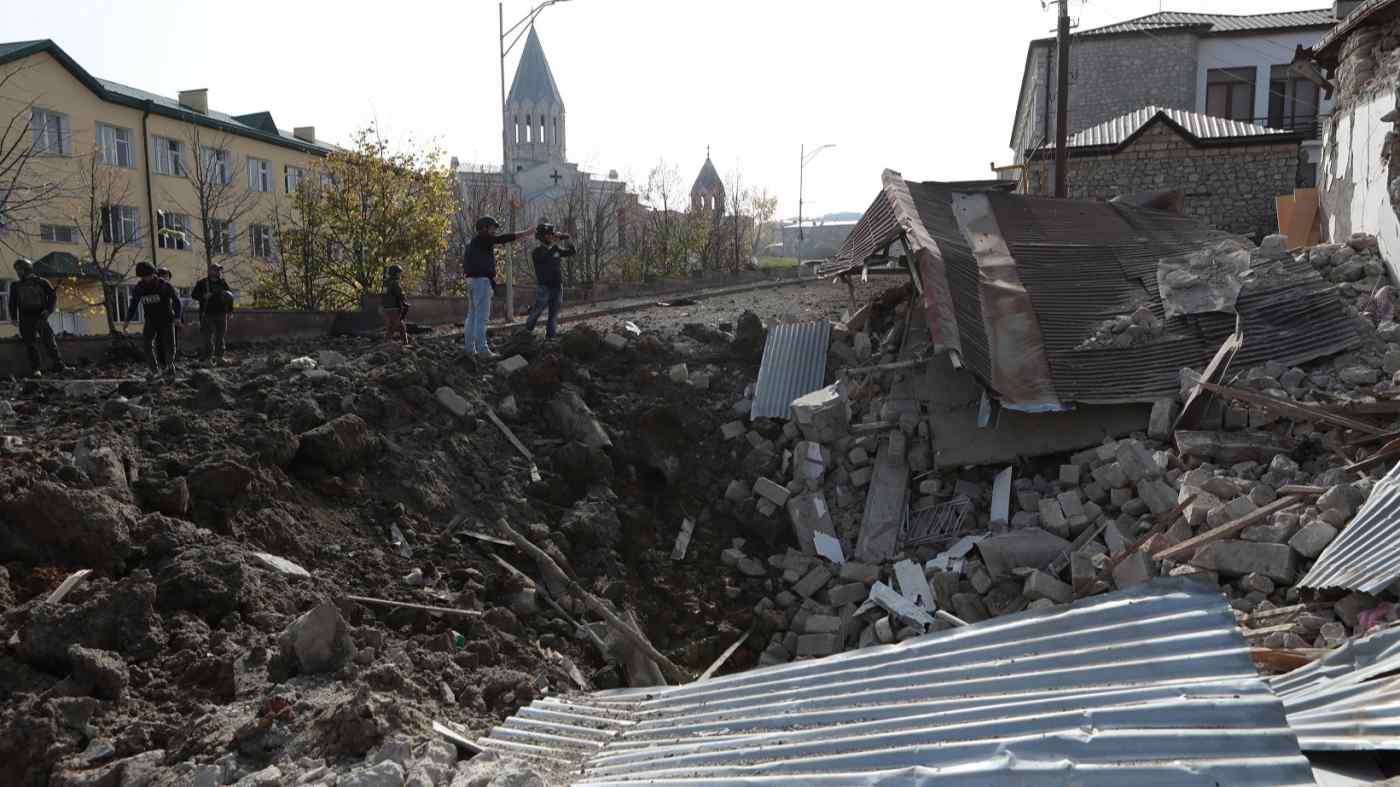 The town of Shushi sustains shelling in the course of a military conflict over the breakaway region of Nagorno-Karabakh.   © Reuters
October 31, 2020 07:33 JST | Russia & Caucasus
CopyCopied

GENEVA (Reuters) -- Armenia and Azerbaijan agreed on Friday to refrain from deliberately targeting civilians in a conflict over the mountain enclave of Nagorno-Karabakh, where hundreds have been killed in more than a month of fighting.

The agreement, which falls short of what would have been a fourth ceasefire, was reached during talks in Geneva between the countries' foreign ministers and envoys from France, Russia and the United States, co-chairs of the group created to mediate.

The co-chairs of the OSCE Minsk Group said in a statement that Armenia and Azerbaijan had also agreed to exchange the bodies of fighters and to provide within a week lists of detained prisoners of war, with the aim of an eventual exchange.

Human rights groups called earlier for an immediate halt to the use of banned weapons by both sides after confirming the use of cluster munitions either fired or supplied by Armenian forces in an attack this week on the Azeri city of Barda.

The worst fighting in the South Caucasus for more than 25 years has brought into sharp focus the increased influence of Turkey, an ally of Azerbaijan, in a former Soviet region considered by Russia to be within its sphere of influence.

Nagorno-Karabakh is internationally recognised as part of Azerbaijan, but is populated and controlled by ethnic Armenians. About 30,000 people were killed in a 1991-94 war in the region.

Azeri President Ilham Aliyev said on Twitter the country's troops had taken under their control nine more settlements. The regions to which he referred are in the southern part of the conflict zone, close to the border with Iran.

Azerbaijan's military gains since fighting began on Sept. 27 make a negotiated settlement more difficult. Aliyev has rejected any solution that would leave Armenians in control of territory claimed by both countries as part of their historic homeland.

In comments published on the prime ministerial website, Armenian Prime Minister Nikol Pashinyan, responding to questions from foreign media, said he believed "the principle of 'remedial secession' should be applied to Nagorno-Karabakh".

Remedial secession refers to the secession of a sub-group from its parent state as a remedy of last resort.

Three ceasefires have failed to halt the latest fighting, the most recent brokered in Washington last Sunday by U.S. Secretary of State Mike Pompeo.

The ethnic Armenian-controlled Nagorno-Karabakh defence ministry said it had thwarted Azeri offensives and that shelling of residential areas of towns in the enclave had resumed. It also said it had captured a fighter from Syria.

Rights group Amnesty International and New York-based Human Rights Watch said they had independently confirmed the use of cluster munitions in an attack on Barda on Wednesday. Azerbaijan has said 21 people were killed.

Both groups called for an immediate halt to the use of banned weapons. A separate report by Human Rights Watch on Oct. 23 found that Azerbaijan had used cluster munitions in at least four separate incidents.