Human rights activists say freedom has retreated in China since 2008 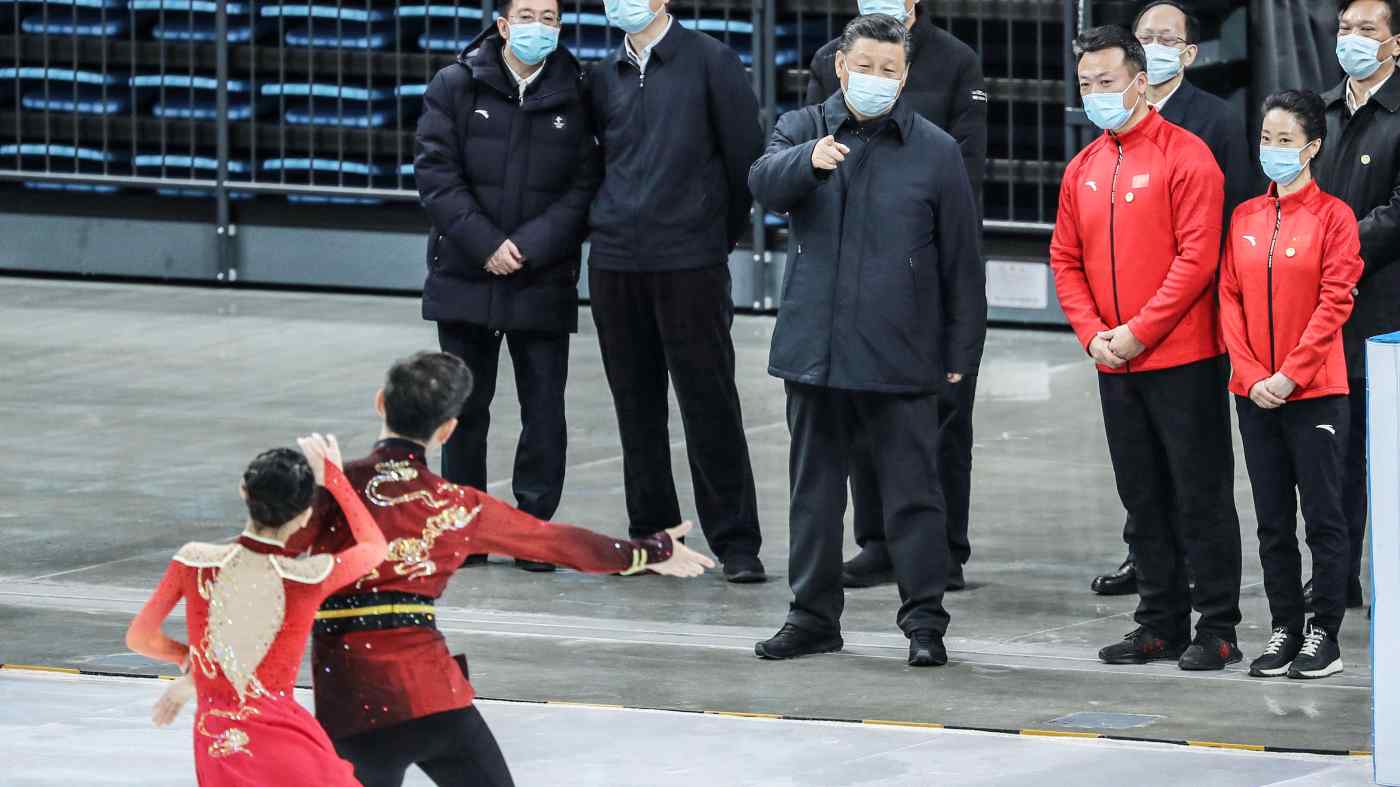 HONG KONG -- As the pandemic-delayed Tokyo Games close on Sunday, attention will turn to Beijing and the prospects of a diplomatic boycott of the 2022 Winter Olympics, the Chinese capital's second turn at hosting the Olympics in less than 15 years.

Critics say human rights in China have only deteriorated since the nation hosted the 2008 Summer Games.

"Back in 2008, there was hope," Minky Worden, director of global initiatives at Human Rights Watch, said during an online conference that it hosted on Friday, discussing the upcoming Beijing Winter Games.

There was a sense of optimism then that the "Olympics could bring positive change to the country, especially for press freedom and human rights. Instead, 13 years later, China is in the midst of its worst human rights crackdowns since the Tiananmen Square massacre in 1989," she said.

More than 180 human rights groups issued an open letter in February urging world leaders to "commit to a diplomatic boycott" of the next Olympics in the Chinese capital, which is less than half a year away. Such a protest entails sending no leaders or dignitaries to the host country. 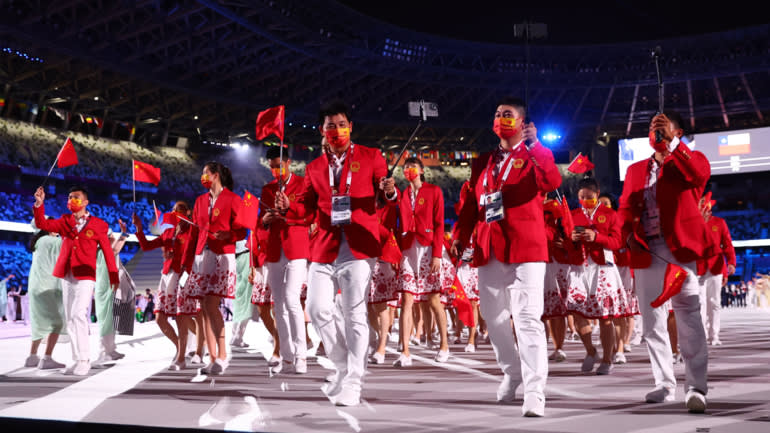 Chinese athletes walk in the parade of nations at the Tokyo 2020 Olympics opening ceremony on July 23.   © Reuters

The letter cited human rights allegations against China in its regions of Tibet, Xinjiang and Inner Mongolia. The groups also noted that Beijing has intensified pressure in recent years against Taiwan, in the South China Sea and on the country's border with India.

The coalition said the crackdown against basic freedoms in China has worsened since Beijing was awarded the 2022 Winter Games back in 2015. The groups urge countries "to ensure they are not used to embolden the Chinese government's appalling rights abuses and crackdowns on dissent."

A separate open letter last September from over 160 rights groups called on Thomas Bach, president of the International Olympic Committee, to revoke the decision that awarded the event to Beijing.

No governments have declared a diplomatic boycott, but lawmakers from the U.S., Canada and the European Union are calling for one.

Human Rights Watch is not part of either letter, but the U.S.-based group favors diplomatic boycott, saying the upcoming Olympics "could be the most problematic Games since the 1936 Berlin Games held in Nazi Germany."

Worden called it "quite unprecedented for an Olympics to take place in such repressions." She cited actions taken in Hong Kong, Xinjiang and Tibet, as well as those involving human rights lawyers, activists, doctors, citizen journalists and netizens across China.

China has repeatedly rejected any criticism of the Beijing Winter Games as well as attempts to connect its alleged human rights record to the Olympics.

After U.S. lawmakers pressured American companies sponsoring the Beijing Olympics, Chinese Foreign Ministry spokesperson Zhao Lijian criticized the Americans as "slandering and defaming China, using this opportunity to interfere, impede and destroy the preparation and staging" of the Games.

During the daily briefing on July 28, he also criticized Washington for "severely violating the spirit of the Olympic Charter," and stressed that "what it damages is the interests of the athletes around the world and the Olympic movement."

Nikki Dryden, a Canadian swimmer in the 1992 and 1996 Olympics, expressed concerns from an athlete's perspective at Friday's forum. Dryden, now a human rights lawyer and an activist for athletes, is especially wary of the security of participants.

"If you are a Muslim athlete from any country in the world, how could you possibly feel safe knowing that the host nation is systematically targeting Muslims in their own borders?" she said. 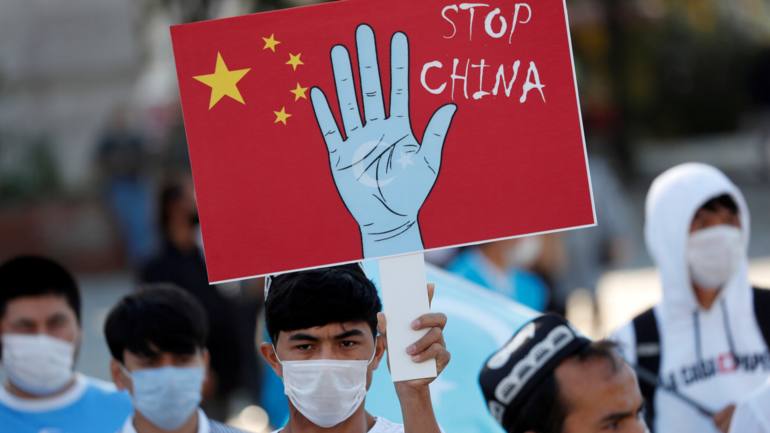 Ethnic Uighur demonstrators take part in a protest against China in Istanbul in October 2020.   © Reuters

The pressure on Western companies with a presence in Chinese market "is more intense than ever before," said Dexter Roberts, a former China bureau chief and Asia news editor at Bloomberg Businessweek.

No major corporate name has announced a formal boycott.

"Any company that considers a boycott doesn't have significant market presence in China," Roberts said.

But companies that have not stated a position on the Beijing Games face a dilemma.

"The pressure on them will only become larger and larger as we get closer to the Olympics," Roberts said. "What matters, obviously, is when it starts to affect share prices and their market shares."

Human Rights Watch has written to all corporate sponsors of the Olympic partner program, Worden said, asking them about their human rights due diligence on the Beijing Games.

"So far, not one has answered," she said, even though the group set a June 1 deadline for responding.

An IOC spokesperson said on Friday, "Given the diverse participation in the Olympic Games, the IOC must remain neutral on all global political issues."

Granting the hosting right "does not mean that the IOC takes a position with regard to the political structure, social circumstances or human rights standards in its country," the spokesperson said in an emailed response.

But Dryden said the IOC is "responsible for this situation." China failed to deliver on its pledge for the 2008 Summer Games to improve human rights and various freedoms, but was still granted another chance to stage the global sporting gala, she said.

She urged the IOC to immediately implement the human rights strategy that was submitted to the commission by independent experts in March 2020 and published last December.

"If that plan was put in place, human rights due diligence would be going on in Beijing and China right now ahead of the Olympic Games," she said. "For me, the IOC has really failed here."

The IOC did not directly answer Nikkei Asia's questions on Dryden's statement Friday. But the spokesperson said that all host cities, governments and relevant parties "have to provide assurances that the principles of the Olympic Charter will be respected in the context of the Games." This charter upholds human rights, and China has provided assurances, just like any other hosts, the IOC said.

The statement added that "the IOC has neither the mandate nor the capability to change the laws or the political system of a sovereign country."

Rayhan Asat, a senior fellow at the Atlantic Council strategic litigation project, opposes a boycott of the Winter Games, saying it would unfairly harm the athletes. But Asat, an ethnic Uyghur, says the Olympics are also about human dignity.

"We should not forget that the Chinese government would make sure to showcase Uyghurs dancing and living a happy life," she said. If the Beijing Games are conducted as planned, there is a "danger that people will walk away with this illusory impression of what China is and what it stands for."

Asat has a 34-year-old brother, Ekpat, detained in one of the Chinese Uyghur camps that Beijing calls re-education centers.

She proposes a postponement of the Beijing Olympics.

"If we can postpone the Olympics for COVID, why not postpone it for crimes against humanity?" she said. "Why not postpone it in the face of mass atrocities and in honor of those victims who are using every last breath to fight in the hope that people like us, the international community, are fighting with them every step of the way."