As the Taliban gain, Biden vows to stick with Afghan president NEW YORK -- Afghan President Ashraf Ghani does not like to wear suits. But the 72-year-old former professor, who once renounced his U.S. citizenship for his presidential bid in Afghanistan, swapped his usual comfortable, flowing outfit for his Western-style best for his trip to Washington this week.

Ghani's mission on this two-day visit to the U.S. capital: to persuade the American leadership to delay the U.S. forces' pullout, or at the very least to keep providing Afghan security forces with the support and protection they need in the face of the Taliban's rapid gains all across his country.

At the White House on Friday, U.S. President Joe Biden promised to "stick with" the Afghan leadership but did not hide his worries about the path ahead.

"Afghans are going to have to decide their future ... and the senseless violence, it has to stop, but it's going to be very difficult," Biden said. "But we're going to stick with you, and we're going to do our best to see to it you have the tools you need."

Accompanied by his political rival but unity government partner Abdullah Abdullah, Ghani acknowledged that he respected Biden's decision to withdraw.

"President Biden's decision has been historic -- it has made everybody recalculate and reconsider," he said. "We are here to respect it and support it."

Biden -- who as vice president opposed then-President Barack Obama's "Afghan surge," where U.S. troop levels topped 100,000 in Afghanistan in the early 2010s -- announced a complete withdrawal of American forces this past April. On Friday, he promised that the relationship with Afghanistan is "not ending" and will be "sustained" -- and that even though American troops are leaving, the U.S. will continue with "helping to maintain their [Afghan] military as well as economic and political support."

Ghani responded to Biden's remarks by saying: "The Afghan nation is in [an] '1861 moment,' like President Lincoln. Rallying to the defense of the republic, determined that the republic is defended. It's a choice of values: the values of an exclusionary system or an inclusionary system."

Earlier, at the Pentagon, Ghani met with Defense Secretary Lloyd Austin but could not generate any clear support beyond the perfunctory.

A Pentagon news release featured language steeped in diplomatic abstraction: "Austin reaffirmed the United States' commitment to an enduring U.S.-Afghan defense relationship," it said. "The secretary also stressed that the department is deeply invested in the security and stability of Afghanistan, and reiterated U.S. support for the continued competency of the Afghanistan National Defense and Security Forces."

What neither Biden or Austin commented on were the recent lightning gains by the Taliban, beyond their strongholds in Afghanistan's Pashtun-dominated south, in the Tajik-, Uzbek- and Hazara-dominated north and west.

The Taliban have taken an additional 50 of the country's 370 districts since May, according to Deborah Lyons, the United Nations' special envoy on Afghanistan, now controlling about a third of the country. According to a tracker from The Long War Journal, 144 districts are under Taliban control, 171 are contested, and 83 are under the Afghan government or undetermined. But a new, recently reported-on U.S. intelligence assessment says that both American military and intelligence estimates indicate that the country could collapse as soon as six months after the U.S. military withdraws. 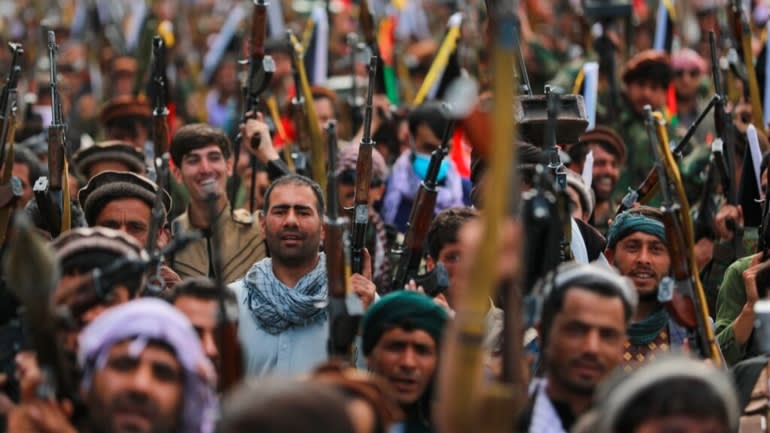 Afghan militiamen join Afghan defense and security forces during a gathering in Kabul, Afghanistan on June 23. Taliban gains in north Afghanistan, the traditional stronghold of the country's minority ethnic groups who drove the insurgent force from power nearly 20  years ago, has driven a worried government to resurrect militias.   © AP

Ghani told Biden on Friday: "Just for your information, today, the Afghan Defense and Security Forces have retaken six districts, both in the south and the north."

On Thursday, Ghani had appealed to both sides of the aisle, meeting with U.S. congressional leaders. His efforts paid off with the Republicans, as Senate Minority Leader Mitch McConnell was unequivocally critical of Biden's decision to withdraw.

"The Taliban, emboldened by our retreat, is rolling back years of progress, especially for the rights of Afghan women, on its way to taking Kabul," McConnell warned in a statement. "Increasing indications that this collapse could come soon after U.S. withdrawal is complete are as tragic as they are avoidable."

"President Biden's decision to withdraw U.S. forces leaves our Afghan partners alone to confront threats that his own top advisers acknowledge are grave and growing worse," he said.

"To some this may be Ghani's last attempt to influence American policy favoring his position and in defense of his agenda for staying on in power," he said. "For others it's too late or futile."

"What is certain though is that there is an American decision to leave and that having scuttled previous peacemaking opportunities, both he and the Taliban are now facing a two-track destiny: civil war or a political transition toward negotiations," Samad said.

"Reaching out to his American base at a time when the American policy seems set and there is little wiggle room may result in marginal additional financial commitments and rhetorical support but may not alter strategy," he said.

"The civil war prospect may be bloody yet temporary and eventually put the Taliban firmly in charge, whereas the political track may result in an interim period and a negotiated settlement," Samad said.

Elise Labott, an adjunct professor at American University's School of International Service and a columnist for Foreign Policy magazine, wrote Friday that Ghani is on a "last-ditch mission to stave off gains by Taliban militants, secure continued U.S. financial support after the withdrawal of NATO troops from the country, and, above all, seek tangible assurances from Biden that the United States will not allow his government to fall."

But Labott also laid some of the blame for the coming collapse at Ghani's door.

"Ghani's leadership and treatment of the military demoralized Afghan forces, which, in turn, helped fuel the Taliban insurgency," she recalled. "Since then, Ghani has continued to micromanage the war and undermine commanders -- with disastrous results. Amid military setbacks, he revamped leadership in the security sector, changing interior ministers twice and replacing the minister of defense, army chief of staff, and half a dozen core commanders -- some of them with more political savvy than military expertise."

Torek Farhadi, an adviser to former Afghan President Hamid Karzai, said that the meeting at the White House was "much like the dialogue of a couple before divorce."

"The Afghan delegation is in town to prove Taliban are violent and they don't believe in democracy," Farhadi said. "The White House will say, we know Taliban are violent but they are part of the Afghan polity and the government must work harder and in sincere unity on the Kabul side to make peace for the sake of keeping Afghanistan together."

"The U.S. is ready to pay alimony after leaving in the form of economic and humanitarian aid as well as diplomatic support," he said. "Washington is concerned that there is procrastination on the part of Ghani on peace as it is an open secret he [Ghani] isn't acceptable to Taliban as a future leader. It hopes other Kabul leaders will have more to say to swiftly move towards a political settlement."

But Ghani tried to put a positive spin on the situation. "Let us understand that in moments of great transition, things happen, but you will see that with determination, with unity and with the partnership, we will overcome all odds," he said in the Oval Office.