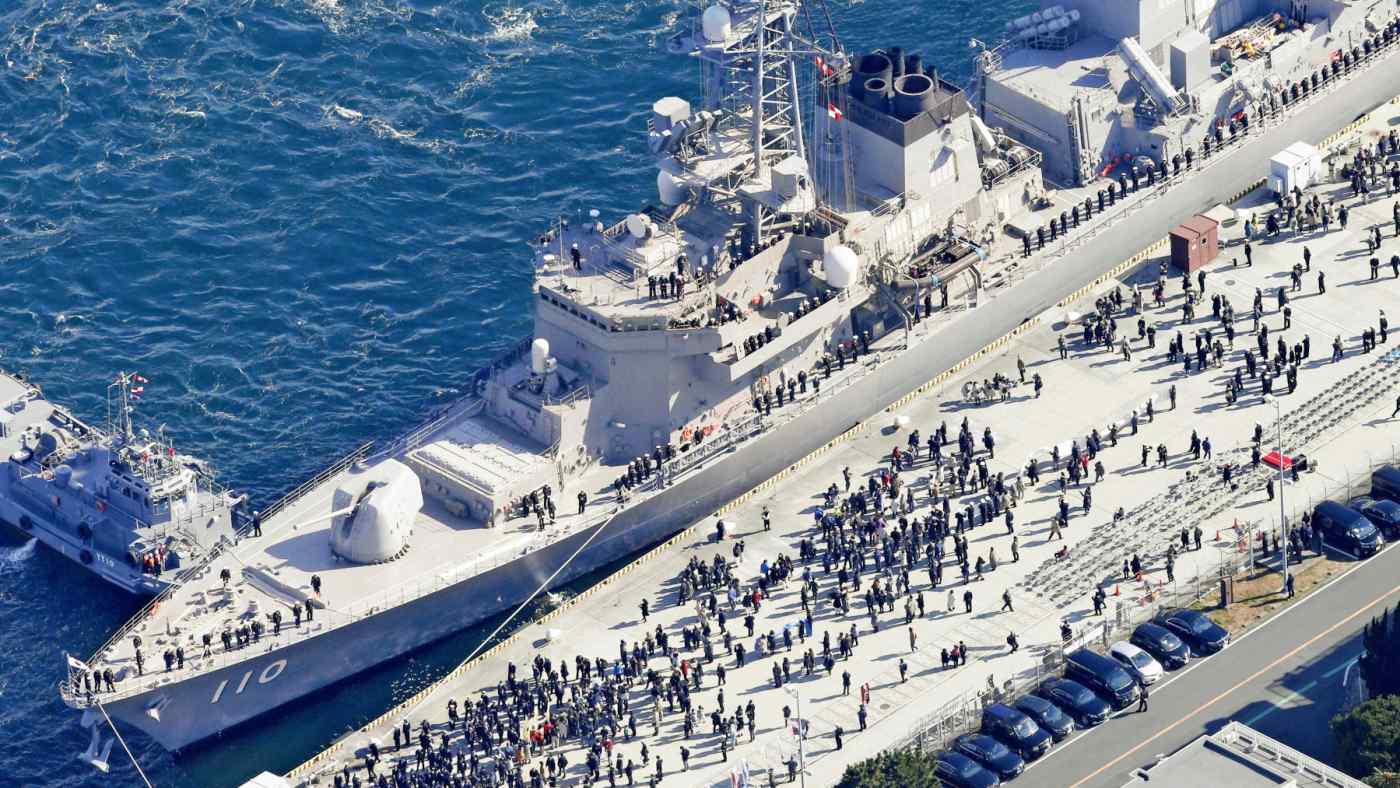 Takanami, a destroyer of the Japanese Maritime Self-Defense Force, is seen at port in Yokosuka Japan. Two of Japan's vessels were denied entry to the Marshall Islands and the Federated States of Micronesia in February after the island nations imposed entry bans from Japan.   © Kyodo
RIEKO MIKI, Nikkei staff writerMarch 24, 2020 07:14 JST | Japan
CopyCopied

TOKYO -- Joint military drills and defense summits are being canceled across the Asia-Pacific in response to the coronavirus outbreak, throwing a wrench into Japanese and U.S. efforts to woo regional players in their rivalry against China.

"Several joint exercises have already been canceled as part of the coronavirus response," Japanese Defense Minister Taro Kono told reporters last Thursday. "It is regrettable that opportunities to advance defense cooperation with other countries are being postponed or canceled."

The Shangri-La Dialogue, a key defense summit organized every year in Singapore by the International Institute for Strategic Studies, is currently up in the air. IISS Director-General John Chipman told Kono on Monday that this year's summit could be postponed to 2021, though it is up to the Singaporean government to make that call.

Two of Japan's Maritime Self-Defense Force vessels were denied entry to the Marshall Islands and the Federated States of Micronesia in February despite scheduled port calls. Both Pacific Island nations had imposed total entry bans from Japan amid the coronavirus outbreak.

Scheduled meetings with local defense officials were canceled as well. The ships returned to Okinawa to conduct drills in those waters instead.

The outbreak has disrupted Japan's push to strengthen security cooperation with Australia, which it considers a "quasi-ally."

Australia has closed its borders to all noncitizens, which impedes possible exchanges between the SDF and the Australian military. "It is a blow not to be able to compare deployment plans with Australia," a Japanese defense official said.

The Australian Army Skill at Arms Meet, which the SDF would have joined in March or April, has been called off. A soldier from Japan's Ground Self-Defense Force takes part in a beach invasion exercise at Camp Pendleton, California, in 2019   © Reuters

Japan's first joint flight exercises with the Indian military are also up in the air, with India imposing entry restrictions for Japan and travel curbs at home. A defense ministers meeting with Papua New Guinea, Fiji and Tonga, as well as with top officials from the U.S. and the U.K., has been pushed back from its original April 5 date.

These disruptions pose serious roadblocks for Japan's security strategy, since many of the affected countries are crucial to the "free and open Indo-Pacific" strategy -- Japan and America's response to China's growing clout in the Indian and Pacific oceans.

The coronavirus has left a mark on Japan-U.S. relations as well. The U.S. government told citizens on Thursday to avoid all international travel, while Japan on Monday began asking all arrivals from the U.S. to isolate themselves for 14 days.

Washington has restricted military travel to and from China, Italy and South Korea, but has yet to make a similar move with Japan. "There is no current impact on Japan-U.S. ties, but we will need to consider some type of response unless the situation resolves quickly," Kono said.

"Family members of U.S. servicepeople may voluntarily return to the U.S., but military personnel have a duty to protect Japan under the U.S.-Japan Security Treaty," a representative for U.S. Forces, Japan, told Nikkei on Monday. "We will stay in Japan and prepare as much as we can."

In the U.S., Defense Secretary Mark Esper acknowledged  that the pandemic poses some problems for the military there.

"As this virus ramps up and spreads, we'll obviously see more and more impact in our ranks," he told reporters Monday. "I'm confident that while it may have some impact on readiness, it will not affect our ability to conduct our national security missions, both at home and abroad."

He said that as of Monday, 133 members of the military had been confirmed to have been infected by the virus.

Travel curbs could set back relief for troops currently stationed in Japan, among other things. Disruptions to their operations could in turn undermine security ties between Japan and the U.S.