Pew poll shows many countries are wary of investment by Beijing A Nikkei montage of President Xi Jinping and other senior Chinese political figures and the outside the Great Hall of the People in Beijing. Asian countries are losing confidence in the leadership of the region's biggest economy. (Source photos by AP and Reuters)
MITSURU OBE, Nikkei staff writerDecember 6, 2019 00:02 JST | China
CopyCopied

Forty-five percent of respondents in six Asia-Pacific nations -- Australia, Indonesia, India, Japan, the Philippines and South Korea -- said they do not have confidence in Chinese President Xi Jinping's policies, according to the survey by the Washington-based Pew Research Center. This compares with 29% who have confidence in Xi.

Respondents in Japan were the most negative on Xi, with 81% saying they had no confidence in him. This was followed by 74% in South Korea and 54% in Australia. In the Philippines, however, 58% had confidence in Xi, while 35% did not.

China is embroiled in a protracted spat with the U.S. over issues including trade tariffs, intellectual property theft and cyberespionage, as well as Beijing's human rights record. Washington has recently passed legislation that supports the anti-government protests in Hong Kong, and the House of Representatives this week approved a bill to toughen the U.S. response to China's crackdown on Muslims in the northwestern region of Xinjiang.

China's economic rise is generally viewed as a good thing in the Asia-Pacific. Positive views outstripped negative by 65% to 30% in Australia, 55% to 34% in Japan, and 40% to 36% in Indonesia. Even in the U.S. 50% still believe China's growing economy is good for them, while 41% thought otherwise.

"In this year's survey, we see that China's economic influence is often seen in slightly more positive terms than that of the U.S.," Laura Silver, a senior Pew researcher, told the Nikkei Asian Review. "But, even so, more tend to prioritize strong economic relations with the U.S. -- and this is especially the case among those who say that the U.S. is the world's foremost economic power." 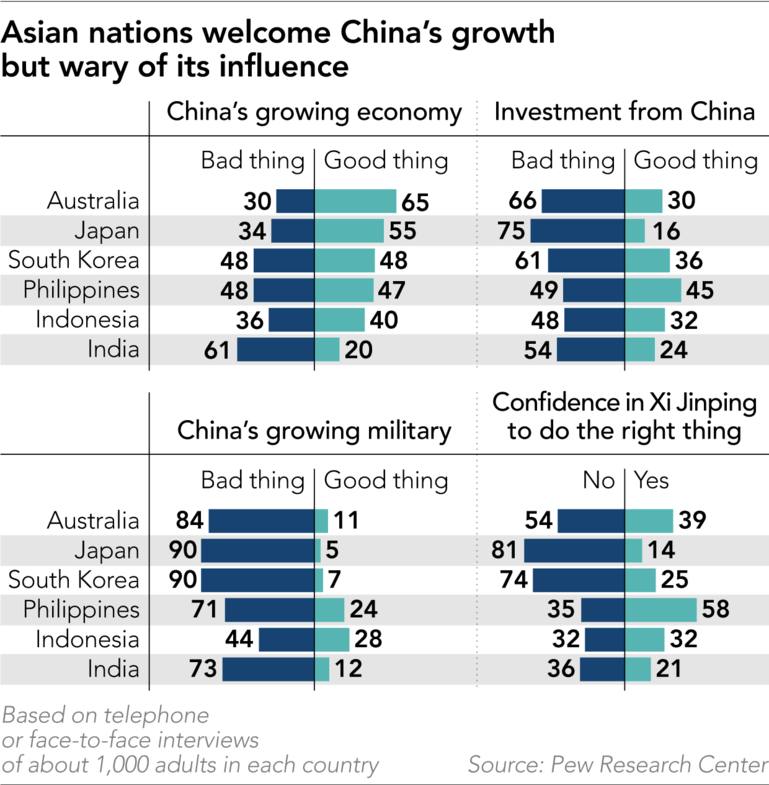 Many countries in Asia, perhaps wary of becoming indebted to Beijing, are growing suspicious about receiving Chinese investment. Some 75% of respondents in Japan said it was a bad thing, followed by 66% in Australia, 61% in South Korea, and 54% in India.

"Most view investments from China with skepticism... because it gives China too much influence," the Pew report said.

Asian nations are even more concerned about China's rapid military modernization and expansion. Many Southeast Asian nations have territorial disputes with Beijing over the South China Sea, where Beijing has been building artificial islands to strengthen territorial claims. More recently, China and Russia flew war planes over islands claimed by Japan and South Korea, prompting the two U.S. allies to scramble fighter jets.

An average of 79% of respondents in the six Asia-Pacific countries said China's growing military might was bad for their country. The share reached 90% in Japan and South Korea, both geographically close to China.

The survey also found that support for U.S. leadership is not as solid as before, even among allies like Japan and Australia. That is due to President Donald Trump's "America first" policies and downgrades of commitments to alliance partners.

But as China challenges the U.S.-led international order, countries still look to Washington for leadership.

The share of people who think of the U.S. as their country's top ally reaches 71% in South Korea, 64% in the Philippines and 63% in Japan. The share stands at just 38% in Australia.