Asian powers plot to fill US vacuum in Afghanistan

From Beijing to Ankara, the race for influence in Kabul is underway A U.S. Marine shouts as he tries to protect an Afghan man and his child after Taliban fighters opened fire in the Helmand Province town of Marjah in Afghanistan in 2010.   © Reuters
WAJAHAT KHAN, Nikkei staff writerJune 17, 2021 05:33 JST | Afghanistan
CopyCopied

As with Turkey, Biden seeks to build a constructive relationship with Russia as he tries to reestablish America's international alliances and partnerships. He also wants to clear his desk while setting his sights on China, Washington's primary "strategic competitor." But an additional factor driving Biden to push for normalized ties, even cooperation, with Ankara and Moscow is the increasingly fraught situation in Afghanistan.

Biden's decision to withdraw all U.S. forces from Afghanistan has spurred internal instability in the country, where violence is escalating as the Taliban score more battlefield victories against the Afghan government and foreign forces disengage. But Washington's decision to pull out has also triggered a regional power play, with different actors -- from China to Turkey, from Russia to India -- looking to take advantage of the diplomatic power vacuum in Kabul.

Afghanistan's political, economic and military dynamics have long been influenced by larger and more powerful neighbors Pakistan and Iran. But one regional player, Turkey, is positioning itself in a key security role after the Americans withdraw.

While other NATO members will have fully pulled out their forces by Sept. 11, 2021 -- the U.S. Central Command said last week that it had completed more than 50% of the "retrograde process," the Pentagon's version of withdrawal -- Ankara has announced that its forces will stay.

Turkey is not an immediate neighbor. It does not share a border with landlocked Afghanistan but lies further west, past Iran. But analysts see Turkey spotting a dual opportunity in Afghanistan. First, Ankara seeks to leverage some goodwill in its soured relationship with the U.S. by offering to protect Kabul's Hamid Karzai International airport, a crucial link to the world. The move, which came in the lead-up to Erdogan's Monday meeting with Biden in Brussels, also fits into Ankara's playbook of increasing its role on the international stage while positioning itself for a more influential role in Afghanistan. The military presence of Turkey -- NATO's sole majority-Muslim member -- would seem more "benign" and a good fit to "straddle the sensitivities" of locals, according to Galip Dalay, a nonresident fellow at the Brookings Doha Center.

But the Taliban think otherwise.

Shortly after Turkey made its proposal, a Taliban spokesman sent a warning to Ankara, saying though Turkey is a "great Islamic country," it is still part of NATO and therefore obliged to withdraw from Afghanistan under the 2020 peace deal with the U.S.

Turkey is hardly alone in seeing the promise as well as the peril of stepping into the vacuum left by the U.S.

China, which shares a border with Afghanistan, has long had its eye on the country as an economic partner, one that could be a lucrative corridor for its Belt and Road infrastructure-building initiative as well as a source of minerals, according to Jason Campbell of Rand Corp. But Afghanistan's lack of security has proved a problem for Chinese investment.

In contrast to America's goals of securing Afghanistan and nation-building there, Beijing sees Afghanistan as an economic opportunity. But the experience of the U.S. and NATO since 2001 will give any country pause before becoming heavily involved, Campbell said. 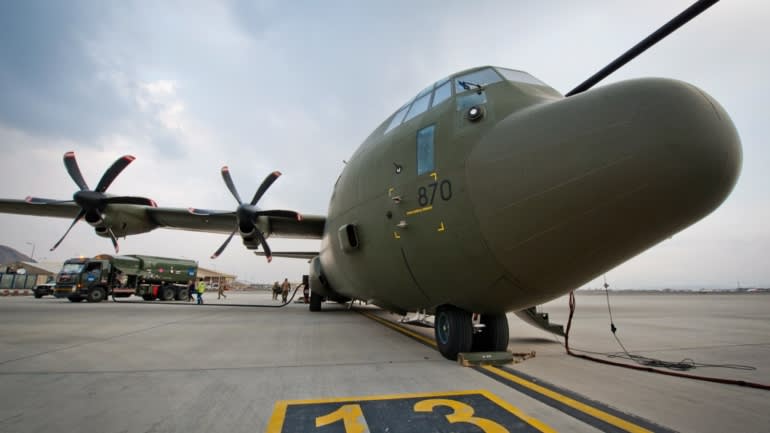 A Royal Air Force C-130J cargo plane is refueled in Kabul, Afghanistan. (Photo courtesy of the U.K. Ministry of Defense)

"There's no other country that's going to want to 'own' Afghanistan to nearly the degree that the U.S. and NATO have over the last 20 years," he said.

So China is treading carefully, teaming up with strategic ally and "iron brother" Pakistan, which exercises considerable influence over the Taliban, and has embarked upon a separate trilateral dialogue with Kabul and Islamabad to secure and develop Afghanistan, vowing to fight terrorist groups that threaten all three countries, while pushing to enter via Belt and Road, also engaging in parallel diplomatic contact with the Taliban.

Toward Afghanistan's north, across the former Soviet republics of Central Asia, where Moscow still wields influence, analysts see Russia as relieved that the U.S. will no longer have a major military presence near its southern flank but also worried that the American failure to secure Afghanistan could lead to further instability, even an Islamist movement that could seep into its own backyard, according to Vinay Kaura, a nonresident scholar of the Middle East Institute.

Much as the Soviet Union trained Afghan security officials in the fight against Afghan mujahedeen in the 1980s, Russia is now training Kabul security force cadets while also considering a more robust defense relationship with the Afghan government, which has requested the purchase of Russian weapons as well as upgrades and maintenance for its military helicopter fleet.

For Shiite-majority Iran, the uneasy relationship with the Sunni Taliban has been mollified by a common adversary in the U.S. With the Americans out of the picture, and the Taliban gaining ground in Afghanistan, Iran has been practical about doing business with the insurgents. Earlier this year, the Taliban were invited to Tehran to meet with Iranian officials and discuss the Afghan peace process.

Toward the east, India, which has long supported the government in Kabul with diplomatic support and investment, has reportedly reversed its long-standing policy of not dealing with the Taliban and is now engaging in direct talks with the insurgent group's leadership.

But Indian involvement in Afghanistan has long been countered by the presence of the one country that will have to pick up most of the pieces America leaves behind, whether it wants to or not: Pakistan. A U.S. Marine has a close call after Taliban fighters opened fire near Garmsir in Helmand Province, Afghanistan, in 2008. Today, most of Helmand is under the control of the Taliban.   © Reuters

For decades, the Pakistanis have suffered both the brunt of and the blame for the conflict in Afghanistan.

Islamabad has implemented an open-border policy with its landlocked Western neighbor, allowing an estimated current population of more than 3 million Afghan war refugees and others to flow into mainland Pakistan.

The Pakistani military, initially with and then without American backing, has influenced the conflict in Afghanistan since the 1980s, first training and equipping sections of the Afghan mujahedeen with American support, and eventually backed various Taliban groups, into the 2000s and 2010s.

This involvement in the war has hyphenated Pakistan with the conflict in Afghanistan while alienating it from segments of the Afghan population. But now, as the power vacuum increases next door, Pakistan seems to be reimagining its own role in the region. National security adviser Moeed Yusuf calls Pakistan's new strategic policy "a shift of the imagination, pivoting from the geostrategic use of our vital position in the region, to geoeconomics," which includes a "core of economic security" and a "pillar of regional connectivity."

So the Pakistanis, often blamed for supporting insurgents in Afghanistan, are now asking for regional powers to share the burden of the expected collapse of the Afghan economy and state in the coming months. In the absence of a unified approach from neighbors, Islamabad is also bracing for impact for what is being perceived by its leaders as a turning back of the clock to the days before the 9/11 attacks on the U.S.

"There is going to be a vacuum, especially the way the Americans are conducting their pullout," said a senior security official on condition of anonymity.

"We had been warning about this very moment. This is not a responsible withdrawal. Let's not pretend this is not like the mistake made in the '90s," said the official, referring to the period of what many analysts in the region simply refer to as "abandonment" -- the disengagement from Afghanistan by Washington after the Soviet withdrawal. 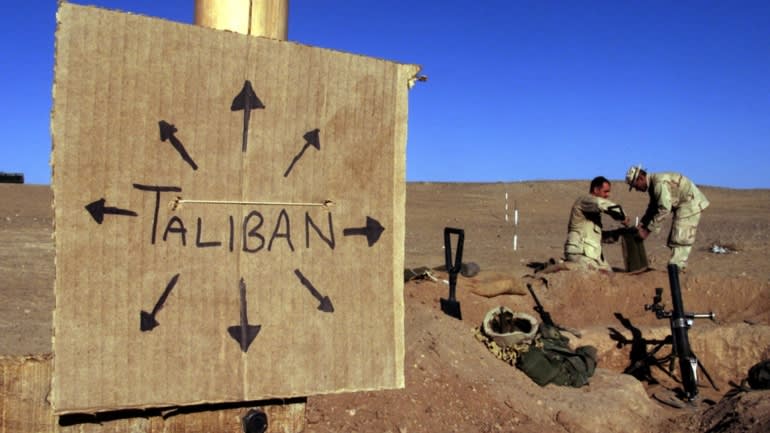 U.S. Marines fill sandbags around their light-mortar position on the front lines of a Marine Corps base in southern Afghanistan in late 2001 as a cardboard sign warns that Taliban forces could be anywhere.   © Reuters

That period led to the evolution of the Taliban, who rose from the ranks of the CIA-backed, anti-Soviet mujahedeen, or holy warriors, and also created a governance vacuum in Afghanistan that allowed for the rise of al-Qaida and other terrorist groups -- a crucial development that led to the Sept. 11 attacks.

"The U.S. said, 'Never again,' and yet, they're doing it again," the Pakistani official said of the American pullout.

"We bore the brunt that time. We will be unable to ignore it this time. But let's not look at Pakistan and say, 'You didn't do enough.' It's the Americans who are upping and leaving."

"Pakistan remain[s] enormously influential, due to its support for the Taliban. It wants to see the Taliban return to power," he said.

"For now, Pakistan is walking the tightrope of retaining influence on the Taliban while avoiding an adverse fallout" with the West, Mir said. Madiha Afzal, a foreign policy fellow at the Brookings Institution, fears that the power vacuum will be widened by a civil-war-style faceoff between the Taliban and the government in Kabul, even as the regional players move in.

"The key dynamic, at least initially, will not be one of the external players jockeying for influence and control -- but the Taliban and Kabul fighting it out," she said.

"Each of these external players [China, Russia, Iran, India and Turkey] has some skin in the game and some moves up its sleeve," Afzal said.

"We've seen Turkey assert its role in recent days, and India change its tack and reportedly initiate discussions with the Taliban," she said. "Pakistan is perhaps in the strongest position, given its location and the history with the Taliban. Yet any role it plays will certainly be contested -- by Kabul, by the Taliban, and by other players."

"Afghanistan is making countries in the region and beyond nervous," Stanford's Mir said. "Yet instead of coming together and offering a coherent international response, they are pursuing independent tracks and further aggravating the crisis," he said.

"China, Russia, Iran, India and Turkey are jostling to become major players in a post-American Afghanistan with a hedging strategy," he said. "They are all engaging with the Taliban under the assumption that a Taliban reemergence is only a matter of time."

"To be sure, their appetite to do business with the Taliban is different -- Russia is much more open to the Taliban than, say, India," Mir said. "But some of these countries are strongly encouraging various Afghan actors to prepare for an anti-Taliban resistance movement -- especially if the Afghan government and security forces start to fold."

But what about Washington? Which country would it prefer to fill the expected vacuum?

"For the U.S., its main concerns will be around Russian and Chinese influence, and that of Iran -- or Pakistani hegemony," Afzal said. "It will accept a degree of Pakistani influence and will prefer that it is contained -- likely by Indian influence and a Turkish role," she said.