At U.N., dual camps but no takers for Taliban recognition

Afghanistan not represented and still sanctioned after week of deliberations UNITED NATIONS -- The United Nations General Assembly that closed Monday saw Taliban-controlled Afghanistan emerge as the "no man's land" of international relations and procedures, with questions looming about its legitimacy, economy and future.

A diplomatic crossfire erupted over whether to "sanction or support" the Taliban, with the five permanent members of the U.N. Security Council, the so-called P5, divided. China, the U.S. and Russia took clear positions. France made a token mention, and the U.K. did not raise the issue.

The U.N. could not decide who should speak for Afghanistan at the General Assembly. The Taliban's nominee, the Qatar-based Suhail Shaheen, was rejected by default by the nine-member Credentials Committee, which did not convene for deliberations.

On Monday, minutes before Ambassador Ghulam Isaczai, the envoy appointed by the now-defunct regime, was scheduled to speak in the penultimate slot of the 193-member debate, the Afghan mission to the U.N., which he still leads, tweeted that "for the sake of national interests" and "in consultation with a number of prominent members" of the U.N., Isaczai would not address the General Assembly.

The unresolved question of Afghan representation is one with immediate repercussions for the future of the war-torn country. The Islamic Emirate of Afghanistan, which the Taliban call the country, faces humanitarian and economic crises and desperately needs to be included in the global financial and legal systems. 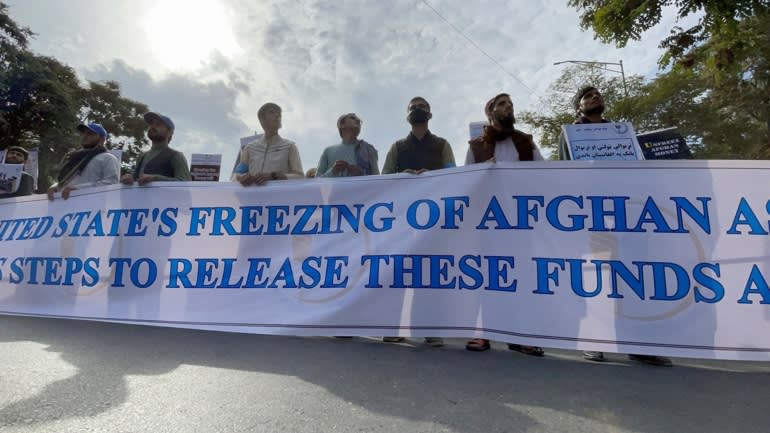 Afghan people stage a protest in Kabul in demand of the release billions of dollars in central bank reserves blocked outside Afghanistan by the U.S. on Sept. 24. (Anadolu Agency via Getty Images)

Over the week of diplomatic deliberations in New York, two camps seem to have clearly emerged. The "engagement" group is made up of China, Russia, Pakistan and Central Asian countries that are pushing against isolation of the Taliban regime, though premised on certain conditions.

The "actions first" side is led by the U.S., backed by its Quad partners, which are pushing for immediate progressive measures by the Taliban.

Making his debut General Assembly address as U.S. president, Joe Biden underscored the unity of the international community's stance on the Taliban. His administration's approach is built around a U.N. Security Council resolution, adopted Aug. 30, that demands that Afghanistan not serve as a haven for terrorist groups; calls for unimpeded humanitarian access to the country; and reaffirms the importance of human rights, with an emphasis on women, children and minorities. It also notes the Taliban's own commitment to letting Afghans and foreign nationals leave if they desire.

In close support of Biden's position, America's closest Indo-Pacific partner, Quad member Japan, said it would "monitor the actions, not words, of the Taliban," as Prime Minister Yoshihide Suga put it in his General Assembly address.

But India, another Quad partner, used the General Assembly debate to condition support for Afghanistan as well as make an oblique reference to rival Pakistan, which New Delhi blames for fomenting terrorism in and from its western neighbor.

"We also have to be careful that no country tries to use the delicate situation there as a tool for its selfish motives," Indian Prime Minister Narendra Modi said. "At present, the people of Afghanistan, the women and children there, the minorities there, need help, and we have to discharge our responsibility." In contrast, China's approach to engagement with Afghanistan continued to gain momentum throughout the week. President Xi Jinping's address did not name Afghanistan but did critique the two-decade U.S.-led war effort: "Recent developments in the international situation show once again that military intervention from the outside and so-called democratic transformation entail nothing but harm," he said.

Chinese Foreign Minister Wang Yi was clearer at a ministerial meeting of the Group of 20. "Economic sanctions must be stopped," Wang demanded in a videoconference discussing Afghanistan. "All kinds of unilateral sanctions or restrictions on Afghanistan should be lifted. Afghanistan's foreign exchange reserves are its national assets, and should be owned by and used for the people, rather than being used as a bargaining chip to exert political pressure on Afghanistan."

As Wang was calling on G-20 members to "actively take practical steps to help Afghanistan ease the current liquidity stress," Beijing was doubling down on the ground. Over the weekend, as the anti-U.S. protests in Kabul urging the U.N. to take action on more than $7 billion in Afghan funds frozen by the U.S. Treasury Department were wrapping up, Chinese Ambassador Wang Yu tweeted that he had met with the Taliban's "Acting Minister of Foreign Affairs Mawlawi Amir Khan Muttaqi."

"Chinese leaders announced to speed up the assistance of 200 million yuan materials to Afg," the ambassador tweeted. "They are here soon. Economic sanctions must be lifted. Afg foreign reserves should be owned by and used for the people."

But if there was one country that pushed the hardest for engagement with the Taliban last week at the U.N., it was the Islamic Republic of Pakistan. Foreign Minister Shah Mahmood Qureshi told Nikkei on the sidelines of the General Assembly of the need for "accepting the new political reality" that is the Taliban and echoed China's sentiments on the frozen assets. And in the general debate, Prime Minister Imran Khan made a passionate case for normalizing ties.

"There's a huge humanitarian crisis looming ahead," Khan said. "And this will have serious repercussions, not just for the neighbors of Afghanistan, but it will have repercussions everywhere, if a destabilized, a chaotic Afghanistan again becomes a safe haven for international terrorists -- the reason why the U.S. came to ... Afghanistan in the first place."

"So, therefore, there is only one way to go," he said. "We must strengthen this current government, stabilize it, for the sake of the people of Afghanistan." Russia, another member of the engagement camp, was also clear about the need for engagement:

"The developments are a reality; what happened is a reality," Russian Foreign Minister Sergey Lavrov said in a briefing Saturday, the day of his General Assembly address.

"The first step was taken: the creation of a transitional structure of government," he said, but with a reminder that the Taliban's promise of an inclusive government needs more work.

"Of course, this does not reflect the whole gamut of Afghan society, ethnoreligious and political forces. ... So what's most important, once again, is to ensure that the promises that they've proclaimed publicly, for those promises to be kept," he said.

Lavrov, a former permanent representative to the U.N., emerged over the week as the most succinct narrator of the importance of maintaining contacts with the Taliban despite pending U.N. sanctions against the group.

"Sanctions of the Security Council, as they currently stand in the relevant resolutions, do not prohibit such contacts [with the Taliban] -- quite the contrary," he explained when asked about Russia's position on the sanctions. "Security Council resolutions have enshrined the need to advance the political process. And this is impossible to achieve without working with the Taliban."

However, even as Lavrov stressed the importance of communicating with the Islamist government to ensure that it meets publicly proclaimed commitments, particularly battling ISIS-K and the narcotics threat, he noted that "international recognition of the Taliban at the present juncture is not on the table."

But Turkey, which emerged as one of the few countries to remain actively engaged in post-withdrawal diplomacy with the Taliban, particularly over an agreement being negotiated about operating Kabul's strategic airport, seemed to harden its position over President Recep Tayyip Erdogan's stay in the U.S.

On the floor of the General Assembly, Erdogan made headlines by becoming the first NATO leader to push engagement with Afghanistan without conditions.

"Regardless of the political process, Afghanistan needs the help and solidarity of the international community," he said Sept. 21.

Central Asia has a critical stake in Afghanistan, which is bordered by three other "Stans" of Tajikistan, Turkmenistan and Uzbekistan. Turkmenistan called for a "quick normalization of the situation" in President Gurbanguly Berdimuhamedov's speech.

President Emomali Rahmon of Tajikistan expressed a similar need for urgency in addressing the humanitarian crisis in Afghanistan but explicitly called out the Taliban for failing to deliver on their promises of an inclusive government.

Despite the varying approaches, for now the international community is united in urging humanitarian action and withholding formal recognition of the Taliban.

But there is a trade-off to this approach, as humanitarian mechanisms are limited when working with a group that the international community does not formally recognize, said Elizabeth Threlkeld, director of the South Asia Program at the Stimson Center, a Washington think tank.

"International recognition is useful leverage in trying to shape the Taliban's behavior," she said. "But the challenge is what impact the lack of recognition will have on the ground in Afghanistan."

The head of the U.N. assistance mission in Afghanistan, Deborah Lyons, said in August that a government that has taken power by force will not be recognized by the Security Council or the regional and international communities. The just-ended General Assembly provided an early test for how the international community will adhere to that principle.

"So pairing that with the desires of the international community to avoid incentivizing similar takeovers by force in other contexts," Threlkeld said. "That's a really tricky dilemma to try to balance, and I think it's going to put pressure on the question of a formal recognition over the next few months."