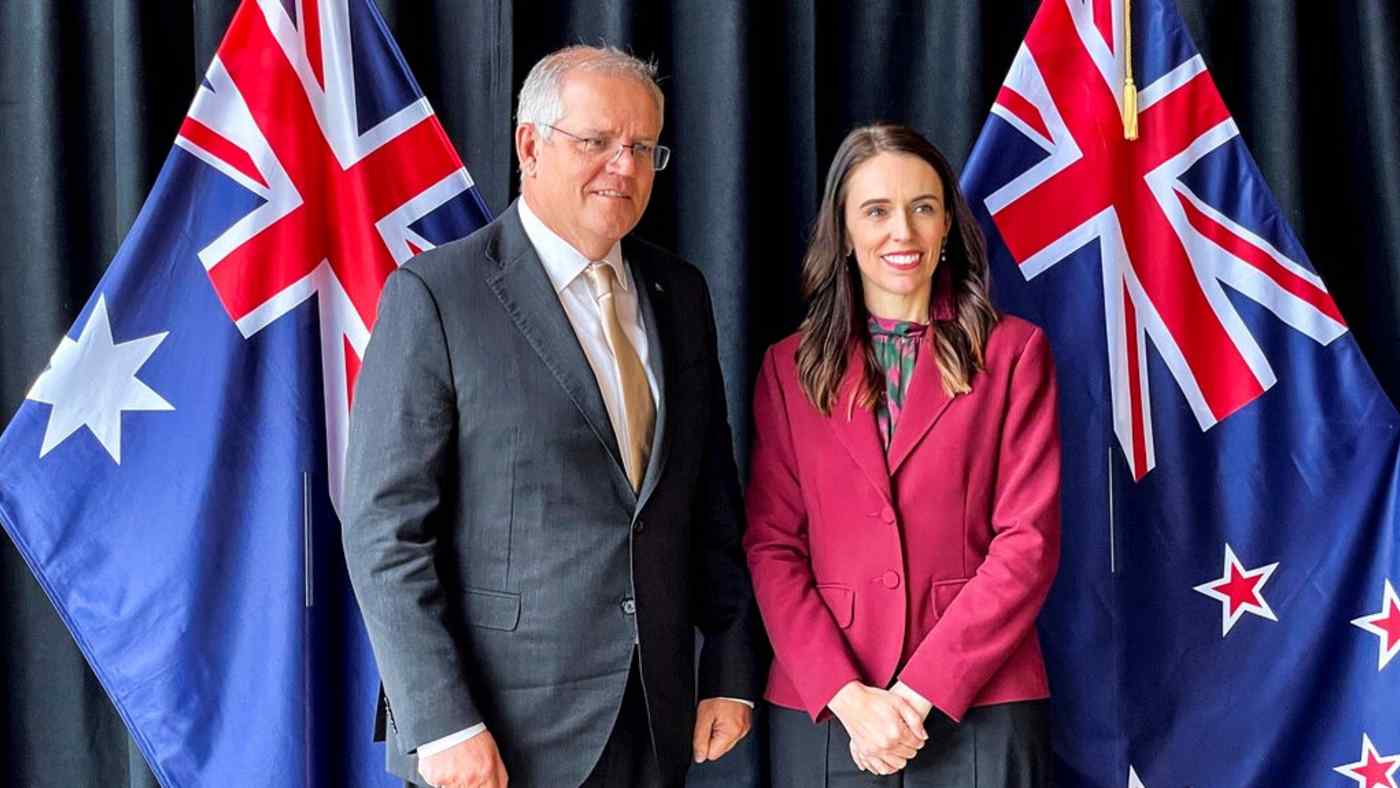 SYDNEY -- The prime ministers of Australia and New Zealand on Monday presented a united front against hardball trade diplomacy and for human rights, while promising the Indo-Pacific region more assistance with COVID-19.

"The prime ministers affirmed their strong support for open rules-based trade that is based on market principles," Australia's Scott Morrison and New Zealand's Jacinda Ardern said in a joint statement wrapping up their annual leaders' dialogue.

The statement barely mentions China by name and its ongoing trade embargoes against Australia. But it does say that the leaders expressed "concern over harmful economic coercion" and that they "agreed to work with partners to tackle security and economic challenges." Comments on Hong Kong, Xinjiang and the South China Sea are also likely to grab Beijing's attention.

Some pundits had expected Australia to call out New Zealand's more pragmatic approach to trade with China -- the dominant market for both countries -- and perhaps its stated reluctance to accompany its Five Eyes intelligence allies in joint statements on human rights.

But over the weekend, New Zealand headed off any such challenge by backing Australia's action against China's barley tariffs as a third party at the World Trade Organization. The tariffs were imposed last year in the wake of a number of disputes between Canberra and Beijing, especially the Morrison government's call for a full investigation into the origins of COVID-19.

For professor James Laurenceson, director of Sydney's Australia-China Relations Institute, New Zealand's diplomatic support for Australia is in keeping with its usual approach.

"Wellington has always avoided taking a chest-thumping approach that has been quite common in Canberra," he told Nikkei Asia. "I expect that'll be the case going forward as well. Wellington has always been more sensitive, in its diplomacy, to Beijing viewing other countries aligning themselves with the United States to attack China."

Laurenceson said there are limits to how far New Zealand will go. "They're going to support Australia in the WTO process. But that's about, I think, the extent of support we can realistically expect from New Zealand and most other countries as well."

The tone of the meeting, with repeated mentions of "family," was sharply at odds with some of the media coverage ahead of it. Australia's "60 minutes" television show denounced New Zealand's maintenance of normal trade relations with China and accused it of snapping up market share lost by Australian businesses.

"You couldn't get a more black-and-white example of the hysteria that sometimes breaks out in Australia over China," Laurenceson said. "I've been speaking to my New Zealand colleagues since that '60 Minutes' episode came out and they all find it quite amusing. They're certainly not having second thoughts about whether they got the handling of the China relationship right. They see it as a reflection of Australia's own panic about the China relationship."

"Working with our like-minded partners all around the world, the United States and the United Kingdom, and as we're discussing across Europe, Japan and India, all of us have a big stake in ensuring a world that favors freedom and a free and open Indo-Pacific," Morrison said -- nodding to the Quadrilateral Security Dialogue (Quad) with the U.S., India and Japan. "We greatly appreciate the partnership we have to achieve those outcomes."

Despite the measured comments, China could still find much to dislike in Morrison and Ardern's joint statement.

The two leaders "expressed deep concern over developments that limit the rights and freedoms of the people of Hong Kong and undermine the high degree of autonomy China guaranteed Hong Kong until 2047 under the Sino-British Joint Declaration."

They also reiterated "grave concerns" about China's treatment of Uyghur Muslims in its Xinjiang region, calling on Beijing to "respect the human rights of the Uyghur people and other Muslim minorities and to grant the United Nations and other independent observers meaningful and unfettered access to the region."

The South China Sea -- where China has simmering territorial disputes with several countries -- also received a mention. Without pointing fingers, Morrison and Ardern criticized the "continued militarization of disputed features and an intensification of destabilizing activities at sea."

In matters closer to the two countries' own backyards, the leaders pledged ongoing support for their "Pacific family" and East Timor, promising to provide safe and effective vaccines against COVID-19.

They stressed that the aid extends beyond vaccine doses to medical supplies, consumables and support for everything from planning and training to cold storage. "Australia and New Zealand will constantly work with partners in the region to reassess needs as circumstances change."

Reconnecting the region through travel was another theme. After opening their bilateral travel bubble in April, Morrison and Ardern said they would look to "extend travel options for Pacific neighbors when safe to do so," including through their quarantine-free zone. "This reflects our close ties to the Pacific and our commitment to supporting their recovery."