Leaders past and present praise relationship with Tokyo 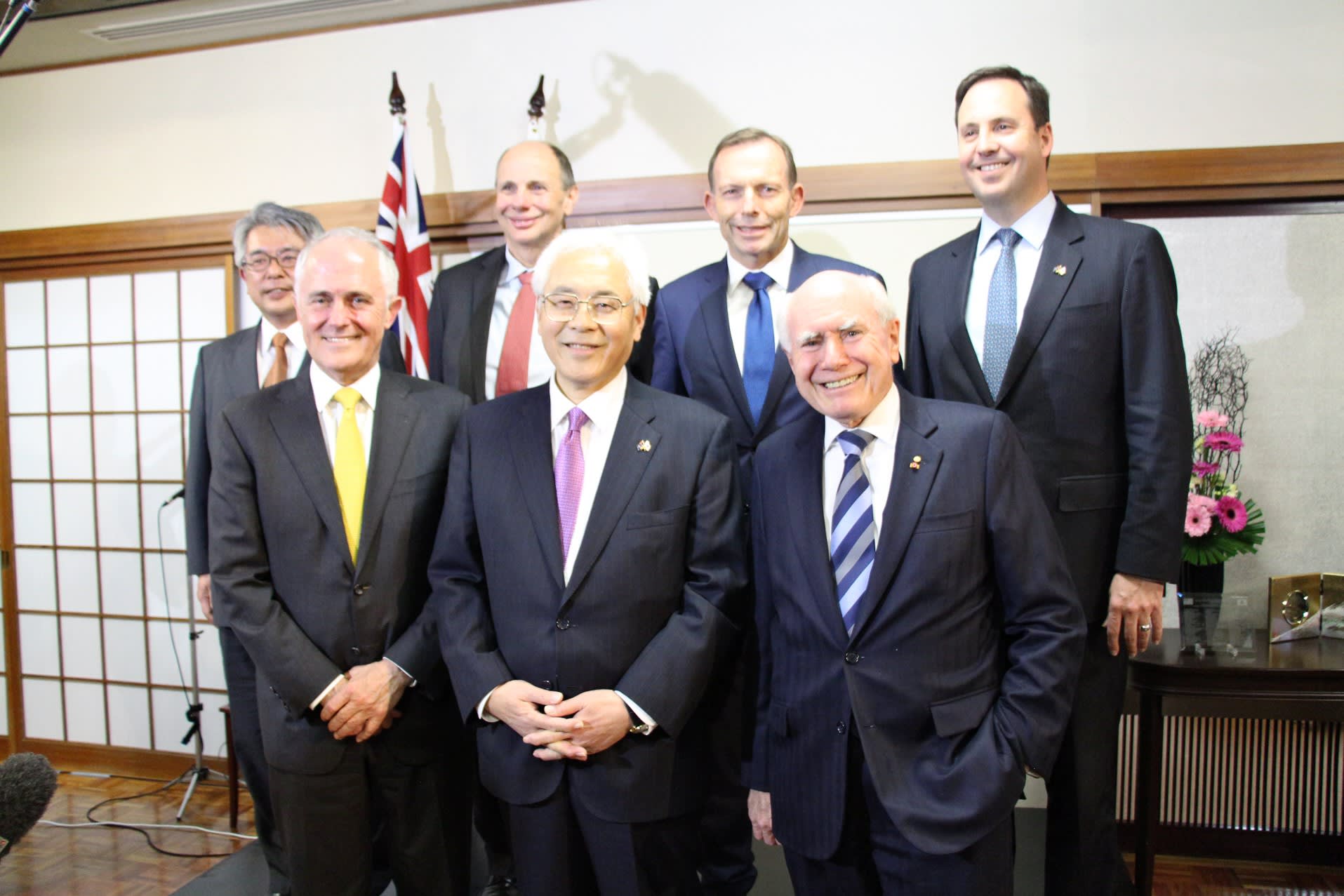 SYDNEY -- Even as China gains clout here, Australia aims to strengthen economic ties with Japan, praising Tokyo's investment efforts and celebrating their partnership on the anniversary of a 1957 bilateral commerce agreement.

Some 100 government and business figures, including Australian Prime Minister Malcolm Turnbull and two predecessors, gathered Aug. 8 at the Japanese Embassy in the capital of Canberra to mark 60 years since the deal.

The deal was "not only the most farsighted, but it really was the true point of economic entry into Asia. I don't think anything is quite as significant as this," former Prime Minister John Howard said in a speech. It came just 12 years after the conclusion of a world war that put the two countries on opposite sides. Even some members of the Australian ruling coalition at the time had reservations about the deal with the memory of Australians imprisoned by Japan as soldiers in the war still strong, Howard noted.

Australia had little choice then but to swallow any discontent. The country was losing access to its biggest agricultural export market, the U.K., which was economically integrating with Europe. But the pivot toward Asia worked. In 1960, Japan surpassed the U.K. to become the biggest importer of Australian wool and Australia lifted a ban on iron ore export. Japan became Australia's foremost trade partner in 1968 and remained so for nearly four decades.

"But for the path having been smoothed through the trade agreement, Australia would not have benefited as much as she did when Japan effectively took the place of Britain as our principal export destination. It's fair to say that for 40 years, Japan was the iron lung, if I can put it that way, of Australia's export performance," Howard emphasized.

Japan is now the third-biggest trader with Australia, behind China and the U.S., and its No. 2 investor. During periods of high growth, it received iron ore and coal from Australia -- still its No. 1 energy supplier today.

Japan ceded Australia's foremost trade partner spot to China in 2007. But Howard -- the prime minister at the time -- said at the Canberra event this month that Japan was a close friend not only economically, but also diplomatically and in security.

"It is a very rich relationship. Japan has been a good foreign policy friend to Australia. And it's a very special democratic bond; our trilateral security dialogue that commenced some 11 or 12 years ago that joins the US, Australia and Japan, is a demonstration that we hold democracy in common," Howard stressed.

The next speaker, former Prime Minister Tony Abbott, recalled concluding the bilateral economic partnership agreement with Japanese Prime Minister Shinzo Abe in 2014. "I took quite a risk by saying that we needed to finalize agreements within just 12 months. But by putting a timeline on them, we got them. Our country is much the better for them, and I believe our partners will be much the better for those agreements."

He noted that China had been angered when Abbott said Japan was Australia's best friend in Asia. "I have to say that this formulation ruffled some diplomatic feathers. But those feathers were definitely smoothed by my friend Prime Minister Abe, who said, no, the best characterization of the friendship between Australia and Japan is that it is a special relationship. We all know the connotations that that phrase a 'special relationship' has."

Last up was current leader Turnbull, who noted 2015-16 bilateral trade worth more than $65 billion Australian dollars ($51.5 billion). But these numbers "do not convey the warmth, the friendship and the affection that our governments and our peoples share," he said.

All three Australian prime ministers at the meeting belong to the ruling Liberal Party. Abbott looked up to forerunner Howard, a fellow conservative, as a mentor of sorts. Turnbull leans slightly more to the middle and has run against Abbott for the party leadership twice. For the three to be photographed together smiling, as they were at the reception, is rare.

Australia's continued warmth toward Japan may come as a surprise, given China's increasing sway here on fronts including business acquisitions and immigration. Spiking housing prices also have many locals worried that foreign investors are keeping their own children from buying homes. But Margaret Bowen of the Australian Trade and Investment Commission, or Austrade, said she wanted to tout Japan's investment record as a model for successful investment by other countries.

Bowen is a Japan hand who has studied on an exchange program in Niigata Prefecture and attended Tokyo's Tsuda University. She took the occasion of the commerce treaty's 60th anniversary to speak with 46 Japanese companies advancing in Australia. Austrade's report last month on Japanese investment in Australia incorporated examples.

Still, Bowen praised Japan's support efforts as "long-lasting and trustworthy." Such investments grew 78% from 2010 to 2016. One issue, however, is that how long Japan will keep up the investments is not well-known, she noted. Bowen said that "Japanese businesses make good partners in Australia's mind," showing a will to further polish the special relationship.