Australia's secretary for foreign affairs and trade said her government's guidance to keep equipment from Chinese makers Huawei Technologies and ZTE out of 5G wireless networks was made after national security risks were assessed from "all possible angles."

In some developed markets, true 5G networks will be rolled out in 2019, allowing feature-length movies to be downloaded in seconds and homes to receive ultrafast broadband internet service wirelessly. But the hypersonic speeds will allow for much more, like true autonomous driving.

As such, a major battle is brewing among the world's telecom equipment makers, one that pits East vs. West, with suspicions being bandied about regarding espionage-enabling devices.

Speaking to Nikkei in Tokyo, Frances Adamson, Australia's top diplomat, said "5G technologies present considerable opportunities for... a new wave of innovation." She added that "the decision to [issue security guidance on 5G to Australian carriers] was made after careful, objective and extensive review of national security risk."

Huawei has been especially aggressive in pushing its telecom equipment, smartphones and other consumer devices into foreign markets. It is on track to beat Apple in full-year smartphone sales for the first time and take second place in the global market, with more than 200 million units already shipped in 2018.

The company has become a lightning rod for debate about the Sino-U.S. trade war. In early December, Meng Wanzhou, Huawei's chief financial officer and the daughter of company founder Ren Zhengfei, was arrested in Canada at the request of the U.S. 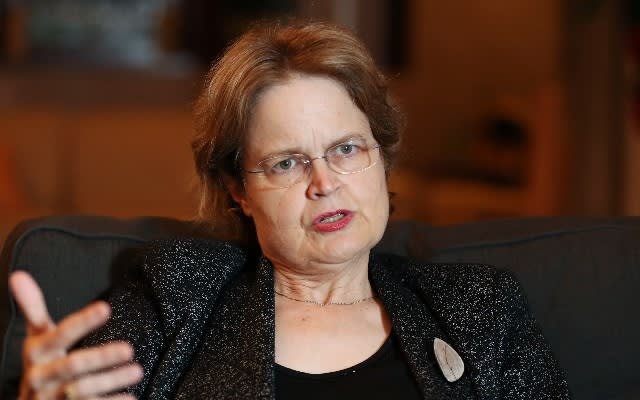 Before that, in August, Australia issued a "5G Security Guidance To Australian Carriers." It says, "The Government considers that the involvement of vendors who are likely to be subject to extrajudicial directions from a foreign government that conflict with Australian law, may risk failure by the carrier to adequately protect a 5G network from unauthorized access or interference."

Although the guidance does not mention specific companies, it is thought to refer to Huawei and ZTE.

"I want to make clear also that we discussed the decision on 5G with the authorities in China," Adamson said. "We confirmed with them that our telecommunications security framework is based on objective criteria. It doesn't target any particular country."

But the decision has angered China and possibly risks Australia souring relations with its largest trade partner. "We wanted to strengthen and deepen that comprehensive strategic partnership with China," said Adamson, who was her country's first female ambassador to China, serving in the post from 2011 to 2015. "I think every country needs to make its own decisions about where to strike a balance."

She indicated that Australia is working with other nations on cybersecurity and other issues.

"We want to become an exemplar to other countries globally maybe considering introducing protectionist measures," she said. "We want to be able to demonstrate very clearly that growth and jobs and prosperity [and] rising living standards come through liberalization in trading arrangements.

"We are setting a new standard, a high standard... not just in good trade but in services, e-commerce and digital elements.... We are open to other economies joining CPTPP. Australia and Japan know very well that the continued prosperity in our region is important to every country in it, and that includes China and the U.S."