With Quad in background, ex-cop riles Beijing over Taiwan 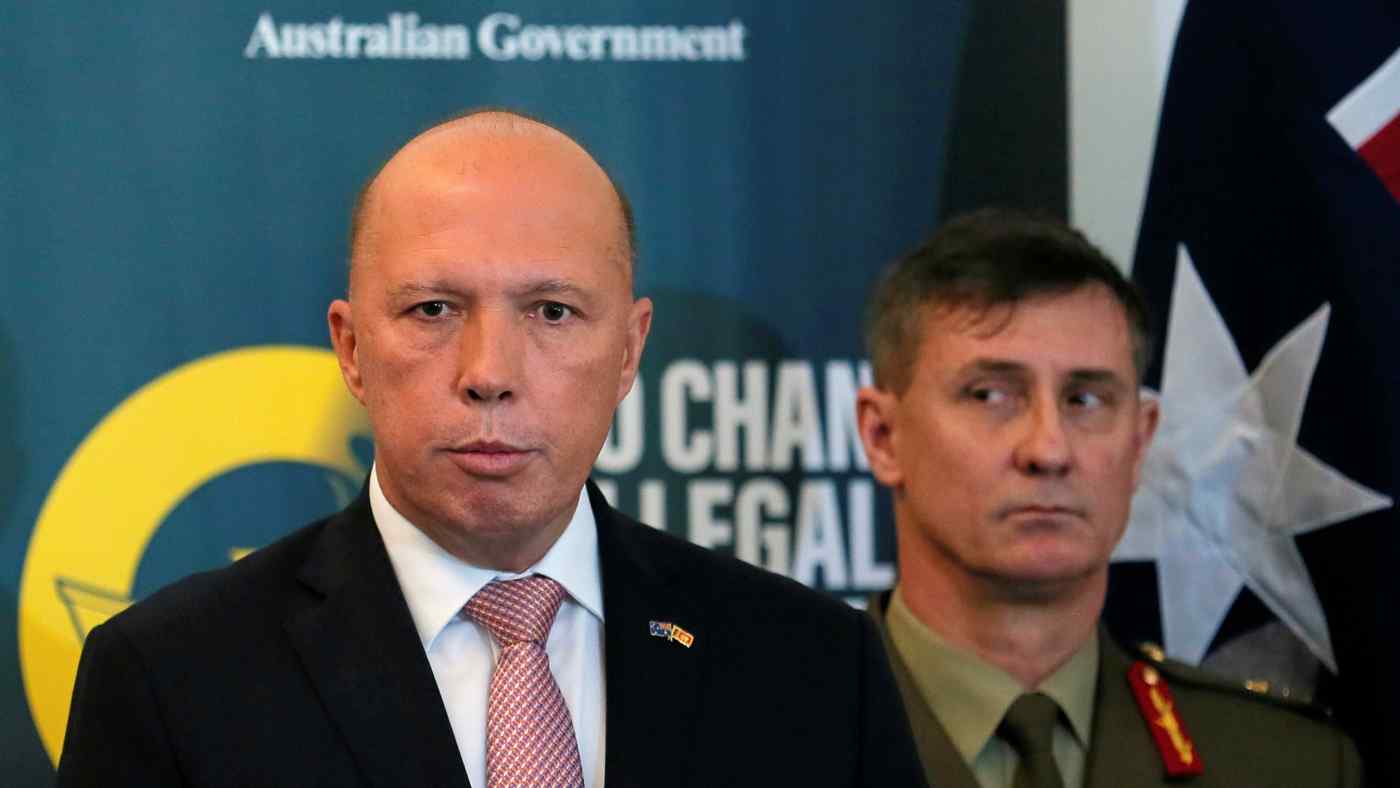 SYDNEY -- Australia's new defense minister has wasted no time irking China in his first month on the job, signaling a more hawkish approach to an already tense relationship.

Speaking on Anzac Day on April 25 -- a solemn occasion memorializing Australia's war dead -- Peter Dutton said a conflict with China over Taiwan "should not be discounted" and warned of the need to deal with Chinese "militarization of ports" across the region.

Dutton surrogate Mike Pezzullo, the departmental secretary of the Department of Home Affairs -- Dutton's previous ministry -- struck a similar tone in a message to staff. Pezzullo said Australia must work to reduce the risk of conflict "but not at the cost of our precious liberty." Free nations, he said, "hear the beating drums" of militarization and must search "for the chance of peace while bracing again, yet again, for the curse of war."

The rhetoric left some analysts scratching their heads and raised fresh questions about the direction of the countries' fraught ties, after 2020 saw China slap punitive trade restrictions on everything from Australian coal and barley to wine and lobsters.

Canberra's tougher stance has gone beyond words lately, too: It recently nixed Belt and Road projects and announced military base upgrades, while enthusiastically embracing the Quadrilateral Security Dialogue (the Quad) with the U.S., Japan and India.

For Bryce Wakefield, national executive director of the Australian Institute of International Affairs, Pezzullo's "drums of war" speech was unwelcome.

"I was puzzled by it," he told Nikkei Asia. "I rather think that bureaucrats should say what they mean clearly and not engage in flowery rhetoric. Actually, most of the time, they should just keep quiet and let the minister take the lead."

Dutton, an ex-policeman, took on the crucial defense portfolio on March 30 after his predecessor was demoted due to a series of scandals over sexual harassment and abuse in Australian politics. Local media reports speculate that Dutton "relishes" annoying Beijing against the backdrop of China's trade penalties and global controversy over the plight of its ethnic Uyghur population.

In the context of what Dutton sees as China's militarization of ports, Foreign Minister Marise Payne is reviewing more than 1,000 China-related deals, including a 99-year lease on the Port of Darwin, which is near a base used by U.S. Marines rotating through the region.

"If it's not in our national interest, then obviously she'll act," Dutton said.

Further offending Beijing, Payne in late April canceled two Belt and Road Initiative deals struck between China and the Australian state of Victoria, noting that it should be up to the federal government to make major deals with foreign countries.

China blasted Australia's "Cold War mentality" after the cancellation. And in response to Dutton's and Pezzullo's comments, Foreign Ministry spokesman Wang Wenbin urged Australia to recognize the delicacy of the matter.

"It is hoped that the Australian side will fully recognize that the Taiwan question is highly sensitive, abide by the one-China principle, be prudent in its words and deeds, avoid sending any wrong signals to the 'Taiwan independence' separatist forces, and act in ways beneficial to peace and stability in the Taiwan Strait and conducive to China-Australian relations," Wang said, according to a ministry translation.

When asked about the Port of Darwin, Wang said Australia should "stop disrupting normal exchange and cooperation with China," at a time when Beijing has barred most Australian exports except iron ore and eschews any diplomatic contact with Canberra.

China's ambassador to Australia, Cheng Jingye, addressed the Australia China Business Council in a webinar on Thursday and insisted that if there has been any economic coercion, "it must have be done by the Australian side."

Wakefield told Nikkei that it is "hard to see an end to the confrontation, because at the end of the day, Beijing wants to make an example of Australia as a nation that is not behaving."

Australia's apparently more assertive approach to China comes amid the reinvigoration of the Quad, which held a virtual leaders summit in March. It was no secret that China was high on the agenda for Australian Prime Minister Scott Morrison, Indian Prime Minister Narendra Modi, Japanese Prime Minister Yoshihide Suga and U.S. President Joe Biden, though they took pains to avoid appearing anti-Beijing.

The rise of the Quad "is definitely one of the biggest developments," Indo-Pacific security expert Ashok Sharman said, though he noted this had been in the works for some time. "There was a trajectory of how the Quad re-emerged two years ago on administrative-level talks, and then it was elevated to foreign ministry and then the Quad summit."

Sharma, a visiting fellow at the University of New South Wales Canberra at the Australian Defence Force Academy, stressed this all "has to be seen in the context of an unfolding strategic scenario and the aggressive and assertive posture of China."

In what may be a prove to be provocative timing after his aides' comments and other developments, Morrison on Wednesday announced upgrades valued at AU$747 million ($579 million) for military bases in Australia's Northern Territory, to be used for war games with the U.S.

"Our objective here is to ensure a peaceful region, but one that at the same time Australia is in a position to always protect," Morrison told reporters in Darwin.