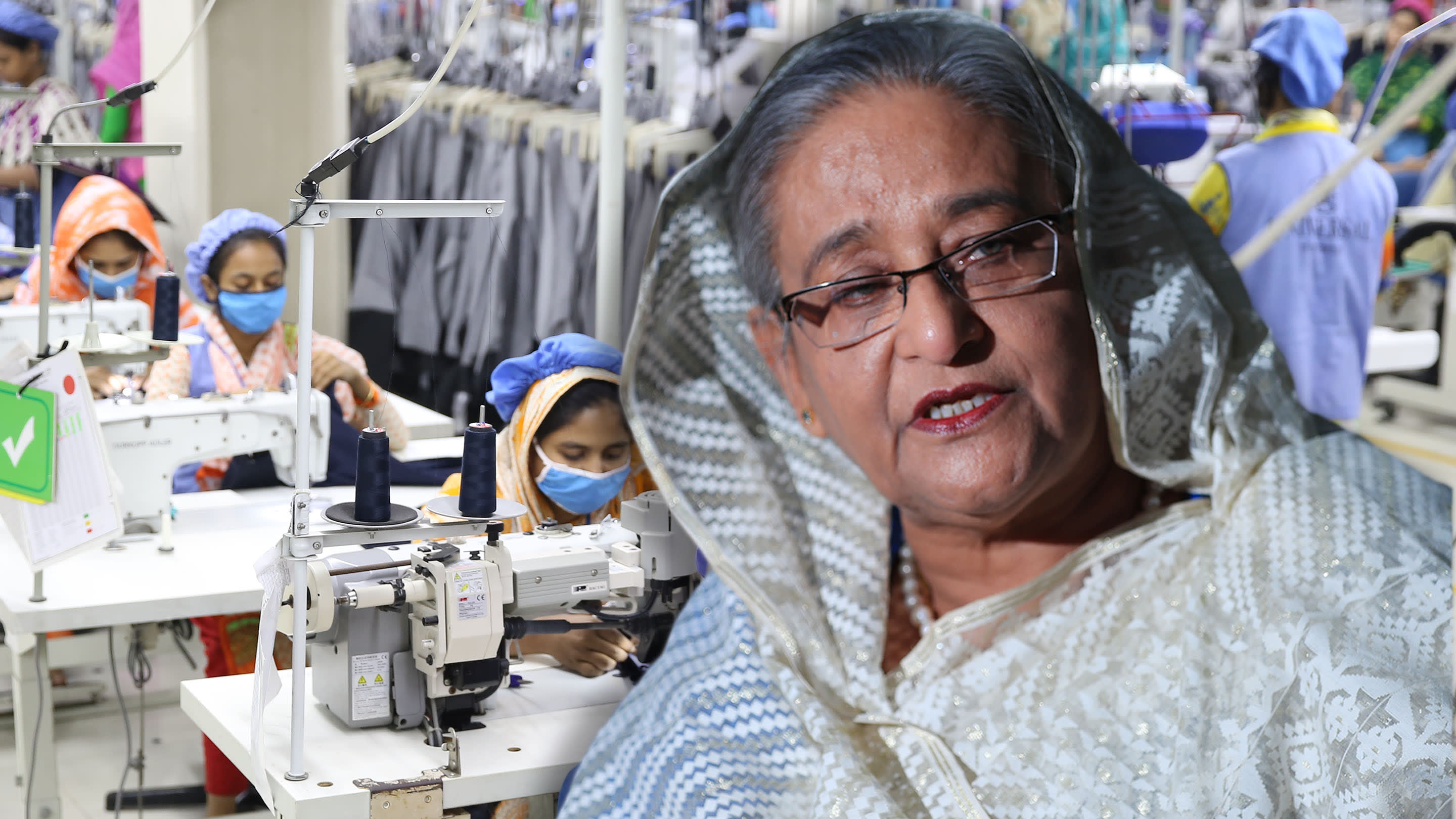 The U.K.'s Edinburgh Woolen Mills Group, whose key brands include Peacocks, Jaeger, Bonmarche, and Austin Reed, has canceled orders worth more than $30 million from nearly three dozen Bangladeshi factories, despite entreaties from the Bangladesh Garment Manufacturers and Exporters Association, BGMEA since mid-April.

Now the trade group is playing hardball. On May 21, the association sent a letter to Philip Day, the company's billionaire owner, threatening to blacklist the retailer in Bangladesh unless it settles outstanding payments with suppliers by May 29. That has intensified a fracas between the conglomerate and BGMEA, which represents more than 4,600 apparel makers.

Many of the 1,000 or so retailers who source products from Bangladesh have canceled or put on hold textiles orders. As of April, more than $3 billion in orders were in limbo, leaving 1,150 factories and 2.28 million workers, mostly women, facing poverty.

BGMEA President Rubana Huq estimates that half a million jobs have disappeared since the deadly coronavirus arrived in Bangladesh on March 8 and the lockdown that followed on March 26. Nearly 400 factories have shut down in recent months, one-third of which have gone out of business. 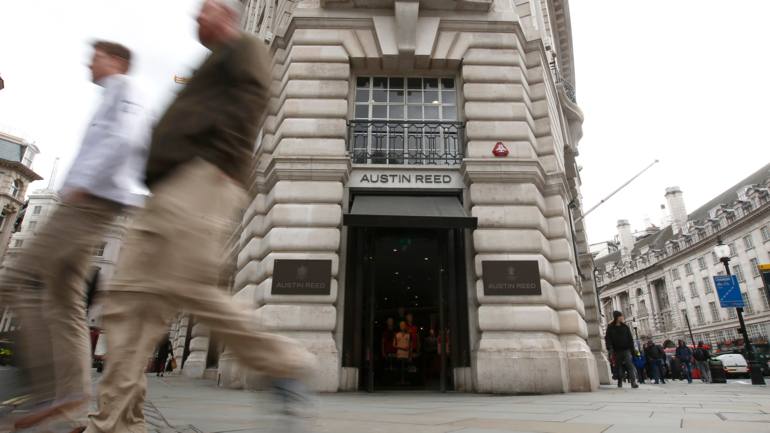 People walk past an Austin Reed store on Regent Street in London: Austin Reed is among the brands owned by Edinburgh Woolen Mills, which is in a dispute with Bangladeshi suppliers.    © Reuters

"Such scaling down of the industry [was] caused by the first wave of the tsunami," said Huq.

But BGMEA has powerful allies, including Bangladeshi Commerce Minister Tipu Munshi. "Toughening up [its] position, BGMEA has done a good job," Munshi told the Nikkei Asian Review. "They are doing the right thing."

Munshi, who headed the association between 2005 and 2006, said that with the help of Bangladesh's diplomatic missions abroad, the ministry is pushing Western retailers hard to honor their agreements with Bangladeshi companies, restoring orders that have been canceled or suspended.

"Some deals are being renegotiated, while other buyers are promising to compensate" those that have lost business, Munshi said. "We're trying to resolve this issue with buyers' representatives and the buyers themselves."

The Bangladeshi economy relies heavily on the garment and textile industry, which accounts for 12% of the country's gross domestic product and 84% of its merchandise exports. Earlier in May, Jafar Uddin, the commerce secretary, wrote to Bernd Lange, chairman of the European Parliament's international trade committee, seeking his intervention to restore garment orders that have been suspended or nixed by European brands.

"Such unbearable and uncompassionate action by some European apparel businesses does not go with the idea of ethical and value-based trade," Uddin said.

The following day, Sigrid Kaag, the Netherlands' minister for foreign trade and development cooperation, pledged to his Bangladeshi counterpart that Dutch buyers will continue to buy Bangladeshi garments. Bangladesh is going beyond public diplomacy. In a video conference with Bangladeshi expatriates in Ireland on May 21, Foreign Minister A.K. Abdul Momen urged the Bangladeshi diaspora living in Europe to mobilize public opinion against "unfair" cancellations of Bangladeshi textile orders by European fashion labels.

BGMEA has also stepped up its lobbying. The association is working with the United Nations and global rights groups, such as the International Labor Organization, Human Rights Watch and the Worker Rights Consortium, to promote ethical buying. BGMEA is also part of an alliance that includes trade associations from the world's major apparel-producing nations.

"We are fighting our own battle, with the help of global media and civil society," said Huq. A case in point is Edinburgh Woolen Mills. "We wouldn't mind having a row" with a brand that has an insignificant stake in Bangladesh and goes into occasional bankruptcy, Huq told Nikkei.

Miran Ali, a director with BGMEA, echoed that thought: Edinburgh "is [engaged in] a sing[ular] case of unfair business practices. ... Bangladesh is no longer going to simply bend over backwards to accommodate unscrupulous brands," he told Nikkei. 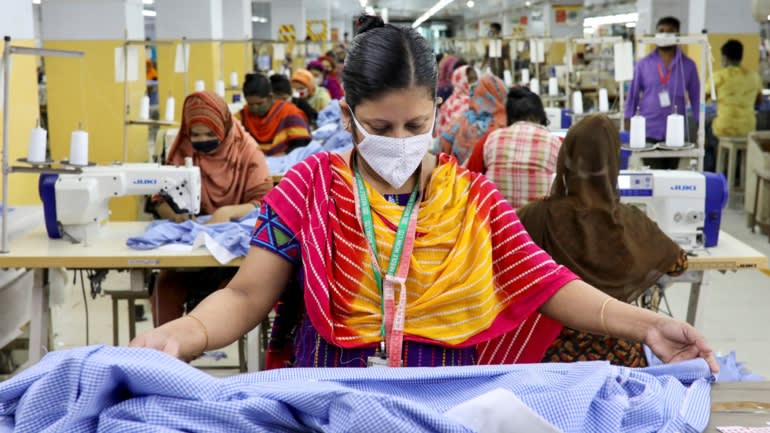 A woman works at a garment factory in Dhaka: Shutdowns brought on by the coronavirus pandemic have put around 2.8 million textile workers in Bangladesh at risk of poverty.   © Reuters

Edinburgh Woolen's Chairman John Herring on May 27 in reply to the BGMEA president's letter dated May 21 lashed out at the group's approach, saying it is "unconstructive" to exert political pressure on British companies. The association "appears to be putting media noise and tactics above engagement, discussion and solutions," a company representative told Nikkei.

Last year Bangladesh's textile shipments came to nearly $35 billion, making it the world's second-largest exporter, after China. But its position is now in peril. In the 10 months through April, the country's textile shipments shrank 14% to $24.48 billion, their lowest in five years, government figures show.

Ahsan H. Mansur, executive director at the Policy Research Institute of Bangladesh, a think tank, said Western buyers have "legal and moral obligations" to support suppliers without canceling shipments they have previously ordered.