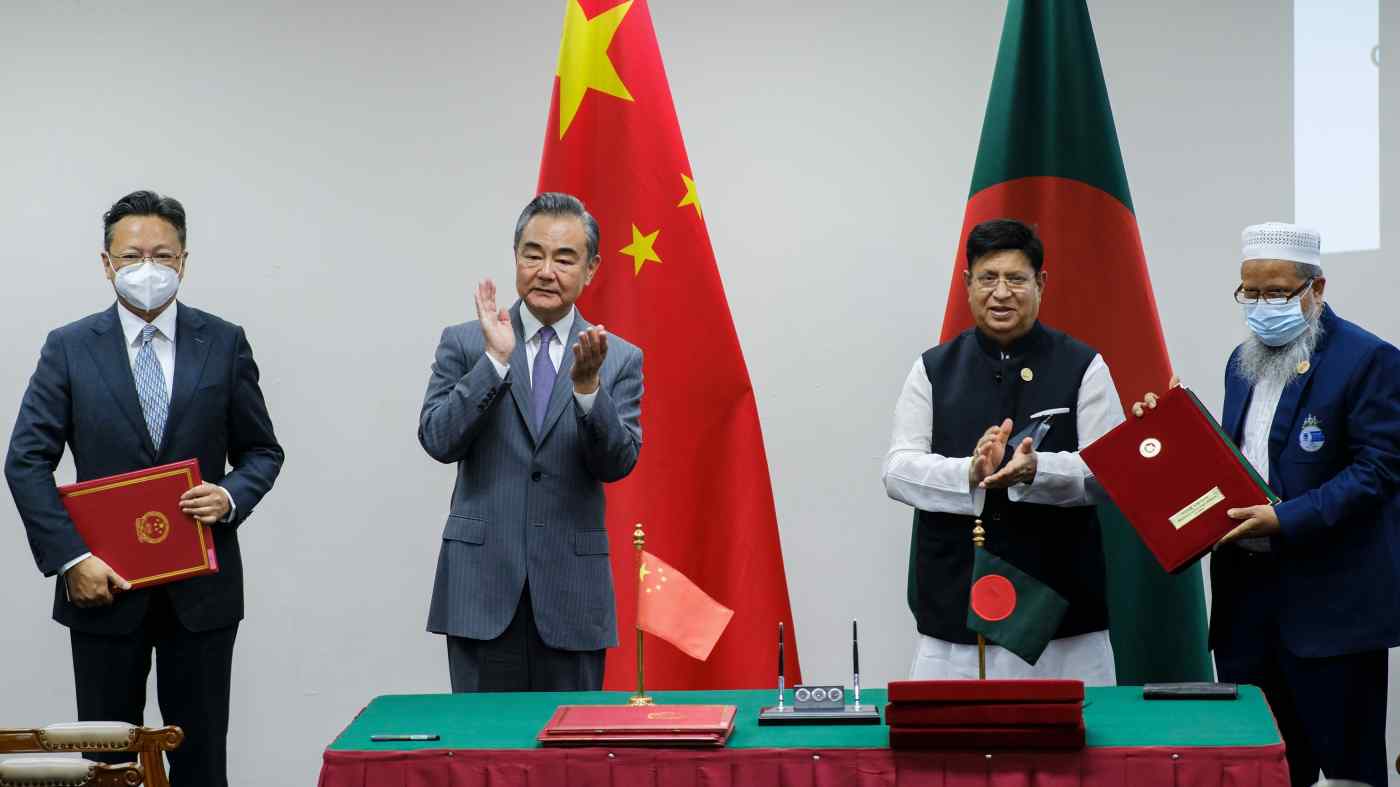 DHAKA, Bangladesh (AP) -- Bangladesh on Sunday sought cooperation from China to repatriate Rohingya refugees to Myanmar during a visit by Foreign Minister Wang Yi, who promised better trade ties, investment and support for infrastructure development in the South Asian nation.

China had used its influence in Myanmar to broker a November 2017 agreement to repatriate about 700,000 Rohingya Muslim refugees who fled persecution in Myanmar in August that year. Despite attempts to send them back, the refugees refused, fearing danger in Myanmar, which was exacerbated by the military takeover last year.

Bangladesh has strong relations with China, which is a major trade partner mostly for raw materials. But maintaining close ties with Beijing is challenging for Bangladesh, which also balances diplomatic and trade relationships with both India and the United States, China's main rivals.

More than 500 Chinese companies are active in Bangladesh. China is involved in all the country's major infrastructure projects such as seaports, a river tunnel and highways, and helped build its largest bridge over the River Padma at a cost of $3.6 billion.

Amid recent tensions between China and Taiwan, Bangladesh issued a statement reiterating its support for the "One China" policy. After winning elections in 2008, Hasina's administration closed the Taiwanese business representative office in Dhaka in response to a request from China, and since then China has increased its engagement in Bangladesh.

Bangladesh's garment industry, which brings in more than 80% of foreign currency from exports, is heavily dependent on China for raw materials.

On Sunday, Yi told Hasina during a courtesy call that his country considers Bangladesh as a "strategic development partner" and would continue to support it, said Ihsanul Karim, the presidential press secretary.

The United News of Bangladesh agency reported that Yi also promised to stand beside Bangladesh "on all issues at international forums."

The state-run news agency Bangladesh Sangbad Sangstha reported that Hasina raised global tensions caused by the Russian invasion of Ukraine and Western sanctions against Moscow, saying "people [across the world] are enduring difficult times ... South Asia, Southeast Asia and China can work together for economic progress."

Alam said that Yi agreed to expand trade benefits by raising to 98% duty-free access from the current 97% of Bangladeshi products and services to Chinese markets.

"It's good news for Bangladesh as we have a thriving economy based on exports," Alam said. "Now they have offered another 1% from Sept. 1," he said, adding that the new tax advantage is likely to include garments as well as woven and other products that had previously faced some barriers.

He said Bangladesh would get a list from China soon about the products and services that would get duty-free access.

Alam said that Yi explained to the Bangladeshi foreign minister that "some countries misunderstand and misinterpret" China. He did not elaborate.

But Momen told reporters separately that the Chinese minister mentioned that a section of Taiwanese people was being provoked against the sovereignty of China.

The junior minister said China pledged to work continuously to resolve the Rohingya crisis and quoted Yi as saying that the internal challenges in Myanmar were not only troubling Bangladesh but also other countries.

"Our foreign minister strongly reiterated that Chinese cooperation is needed. China has progressed on resolving the Rohingya issue and we need the situation to come to an end," Alam said.

On Sunday, Bangladesh and China signed or renewed four agreements and memorandums of understanding on disaster management, infrastructure and cultural exchanges.

Analyst Munshi Faiz Ahmad, who served as Bangladeshi ambassador in Beijing, said that Yi's visit was very significant for both countries.

"To resolve the Rohingya crisis Bangladesh needs support from China. This visit will help strengthen the bilateral relations," Ahmad told The Associated Press.

"To us, China is very important. We also need to maintain good relations with both India and the United States as they are also very important development partners of Bangladesh. There is nothing to be afraid of because of Bangladesh's close ties with China," he said.