KARACHI -- Pakistan is preparing to contest India's claim in the European Union that basmati rice sold in the bloc is genuine only if it originates from specific areas of India. EU acceptance of New Delhi's position could pose a severe blow to Pakistani rice exports and reverse market gains made in the single market the last three years.

India applied for a geographical indication, or GI, tag in the EU in 2018 for basmati rice -- a long-grain aromatic variety popular among South Asians -- exported to the trade bloc from India, including the states and union territories of Punjab, Haryana, Himachal Pradesh, Uttarakhand, Delhi, western Uttar Pradesh and the selected districts of Jammu and Kashmir. The application was published in an official EU journal on Sept. 11 after clearing internal evaluations.

The EU invited member states and third parties to come forward with any objections. Pakistan, which also exports basmati rice to Europe, announced on Oct. 5 that it will file one with the European Commission, the EU's executive arm, against India's exclusivity claim. A deadline for registering the notice has been set in accordance with an EU regulation for Dec. 10, with an additional two months for Pakistan to present reasons for its opposition.

A geographical indication is a distinctive sign used to mark a product with qualities, reputation or characteristics relating to its place of origin. The GI tag attaches a premium to the product, which generally helps it fetch higher prices in the market. Some well-known examples include Swiss-made watches, Chulucanas ceramics from Peru and Thai silk, according to the World Intellectual Property Organization.

India has about a 65% share in the global basmati rice market, with Pakistan taking the rest. But Pakistan's exports to the EU have almost doubled over three years since permissible levels of pesticides on imported agricultural products to the bloc were reduced in 2018, while India has repeatedly failed the tests. 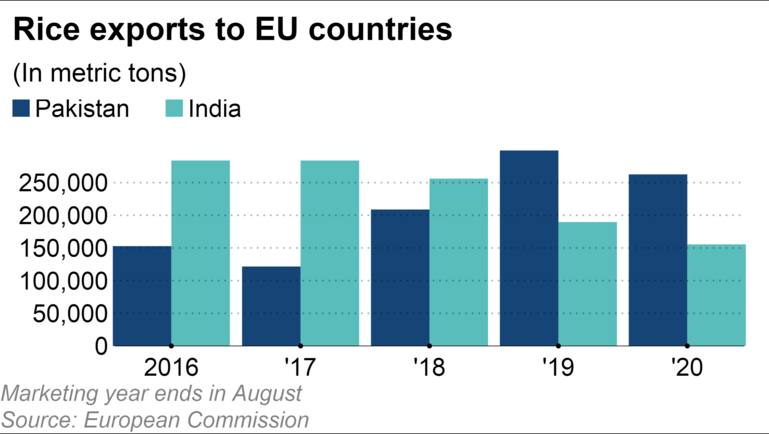 Pakistan earned $2.2 billion from rice exports in 2019 and so far in 2020, with 36% of earnings derived from basmati, according to data from the country's Commerce Ministry. That is significant when factoring in the premium price of basmati, which was marked at $925 per metric ton in the international market, as against non-basmati rice priced at $478 per metric ton from July to September this year, according to the Pakistan Bureau of Statistics.

India's GI push has caused panic among Pakistan's policymakers and rice producers, who are racing against time to first delineate rules for local GI registration and then assign a geographical territory for its basmati rice cultivation -- a matter long encumbered by provincial politics -- so they can effectively challenge India before the European Commission.

Though merely 20% of Pakistan's basmati exports goes to Europe, the potential damage the country would suffer from the EU's recognition of India's GI tag may turn out to be even bigger as the product could become firmly entrenched in the minds of consumers worldwide as Indian rather than Pakistani.

Given the sensitive nature of the issue, both India and Pakistan have appeared largely reluctant to publicly comment on the looming fight over geographical indications in Brussels.

"We are on our toes," a source working to file Pakistan's objection in the EU told Nikkei Asia, however, on condition of anonymity. He said India is trying to reclaim its lost basmati share in the EU market by blocking Pakistan, and India will apply the same mechanism globally if its GI in Europe gets accepted. "Therefore, it is imperative that we knock [their move] down in the European Commission," he said. "Otherwise, their next step will be the [World Trade Organization], [where] 164 countries will start giving them protection." 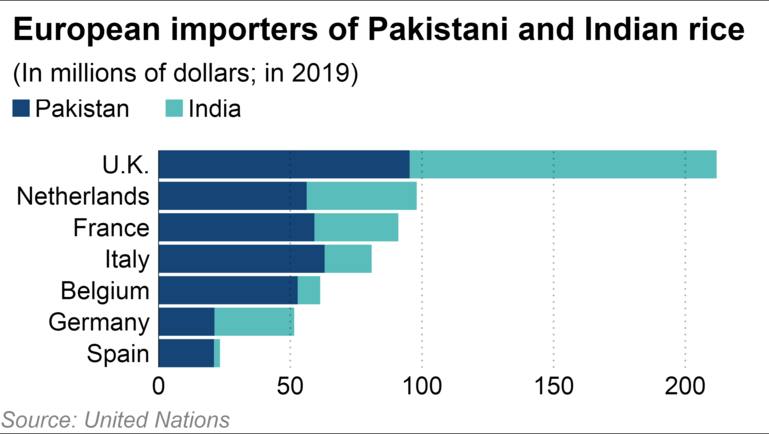 Syed Wajid Pirzada, a food and agriculture specialist formerly associated with the WTO, concurred that India may get an edge in other markets if it is able to secure its GI rights in the EU on account of legal precedence.

But Owais Hassan Shaikh, associate professor at the Karachi-based Shaheed Zulfiqar Ali Bhutto University of Law, who also took part in initial consultations for drafting Pakistan's GI law, told Nikkei that it is common for different jurisdictions to hand out divergent decisions, especially for intellectual property.

"Obviously India will always use it [the legal precedence argument] even though its legal significance would not be much," Shaikh said. "It is not binding, neither is it persuasive."

Pakistani legal experts are hoping that their objection is accepted on the grounds that the EU already acknowledges Pakistan, in addition to India, as a basmati rice grower in an EU regulation that lays down rules for its import. 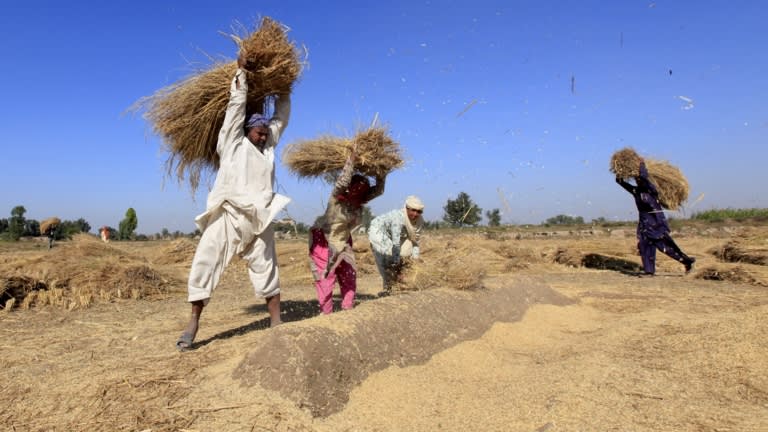 Workers harvest rice in a field outside Faisalabad, Pakistan in 2015. The country is concerned about potential loss of global market competitiveness if the European Commission, the EU's executive arm, accepts India's geographical indications tag for basmati rice.   © Reuters

Pakistan passed its local GI bill in March this year -- 10 years after it was first submitted to parliament. Yet, even after six months, officials have been lax in setting up a local GI registry needed to show the European Commission that basmati is also GI-protected in Pakistan. India passed its GI legislation in 1999 and it came into effect in 2003.

Muzammil Chappal, a Pakistani rice mill owner and basmati exporter to Europe, assailed the government's slow response in implementing the law, saying it will spell doom for all involved in the supply chain. "If India wins, there will be a 20-to-25% decline in [Pakistani] rice exports [to the EU]," he told Nikkei. "If exports go down, exporters will not buy paddy, growers will not get value in the market and the whole system will get disturbed."

Many rice traders are worried that not only will Pakistan lose the right to sell its rice as basmati, thus losing earnings from a premium product, but the trend of repackaging imported Pakistani basmati as Indian basmati to sell in foreign markets, typically carried out at Dubai's transshipment hub, may also increase.