Bhutan tourism stung by new fees on visitors from India THIMPHU -- The tiny kingdom of Bhutan, wedged between India and China, will halt free entry of regional tourists in order to standardize tourism policy, provide better services, and keep Bhutan as an exclusive high-end destination.

Starting in July, regional tourists -- travelers from India, Bangladesh and the Maldives -- will have to pay a daily sustainable development fee, or SDF, of 1,200 ngultrum ($16.8) a person a night, which is 25% of the $65 a day levied on non-regional arrivals.

The new fee comes as Bhutan's tourist industry is already experiencing significant cancellations and uncertainty just ahead of the spring tourist season due to the coronavirus. Chinese are among the top international arrivals, along with visitors from America and Europe.

The fee is part of the Tourism Levy and Exemption Bill of Bhutan 2020, which was adopted by parliament earlier this month. Foreign Minister Tandi Dorji -- who doubles as chairperson of the Tourism Council of Bhutan -- stressed that the main objective is to provide better services, keep Bhutan as a high-end destination, and have one policy for all tourists.

"Through the SDF levy, regional tourists will now have a guide, stay in a standard hotel, and enjoy the same level of services and exemptions given to international tourists," he said. "It is not aimed at regulating, reducing, discriminating or discouraging tourism." Foreign Minister Tandi Dorji said the main objective of the SDF is to provide better services and keep Bhutan as a high-end destination. (Photo by Phuntsho Wangdi)

Since Bhutan opened to tourists in the mid-1970s, it has proceeded cautiously, requiring foreign visitors to spend a minimum of $250 a day during the peak season. This has helped limit arrivals while ensuring substantial economic benefits. Tourism is the country's second-largest foreign currency earner, after hydropower exports to India, which account for a quarter of the country's revenue. In 2018, tourism earned $85.4 million from international arrivals.

But over the past decade an explosion of regional tourists, who are exempt from the minimum daily tariff and do not require a tour operator or guides, has threatened Bhutan's image as an exclusive destination. High-end operators complained that it was becoming increasingly difficult to sell Bhutan as a high-end destination.

For a country with a population barely over 700,000, Bhutan saw 274,000 visitors in 2018, of which 200,000 were regional tourists -- mostly from India, with some from Bangladesh and the Maldives. Most visit during May and June, when temperatures are sweltering in the Indian plains and schools are on vacation.

In October last year, a photo of an Indian motorbike tourist sitting atop a Buddhist shrine in Dochula, a popular tourist site near the capital Thimphu, caused outrage on social media, with Bhutanese calling for immediate measures to regulate regional tourists.

No diplomatic fallout is expected from the Bhutanese government, which discussed the issue with Indian leadership on several occasions. On Feb. 6, Raveesh Kumar, a spokesperson for the ministry of external affairs, was quoted in The Tribune newspaper as saying "some ties are beyond reciprocity," on being asked about Bhutan ending free entry to tourists from the region. He reasoned that Bhutan wanted to upgrade its tourist facilities in a sustainable manner. Regional tourists at the immigration office in the border town of Phuentsholing wait for clearance to visit Thimphu and other western districts. (Photo by Phuntsho Wangdi)

In Bhutan, high-end tour operators have welcomed the decision, saying it is in line with the country's "high value, low volume" tourism policy. "While Bhutan is sold as a high-end destination in the West, it is considered a cheap destination in the region because of exemptions," said Tshering Dorji of tour company Ecstasy Bhutan. "The new regulation will deter agents across the border from selling Bhutan in cheap packages."

Joseph Breen, a 79-year-old American who has visited Bhutan 15 times over the past decade, said the new policy was a necessary protection for Bhutan. "I can't cry 'discrimination.' It is simply supply and demand," he said. "Clearly something had to be done to keep tiny Bhutan from being completely overwhelmed."

But Bhutan's hotel industry, which has made substantial investments over the past decade to tap into the surge in regional tourism, is worried and expects to be severely hit. Between 2012 and 2018, the number of hotels increased from 123 to 276, mostly in the three-star and budget categories. This doubled the number of beds from over 5,000 to more than 11,000.

"As of now, more than 200 hotels of budget accommodation to tourist standard, are under construction in the western region," said Sonam Wangchuk, chairman of the Hotel and Restaurant Association. "The flow of regional visitors is bound to dry up with the daily [fee]," he said, adding that regional tourists help offset the issue of seasonality from high-end visitors. Regional visitors also bring in Indian currency, which Bhutan needs since 80% of its imports are from India.

The chairman pointed out that since regional tourists from India tend to travel as families, the daily 1,200 ngultrum fee would be expensive, even for middle income Indians, who constitute the chunk of visitors. 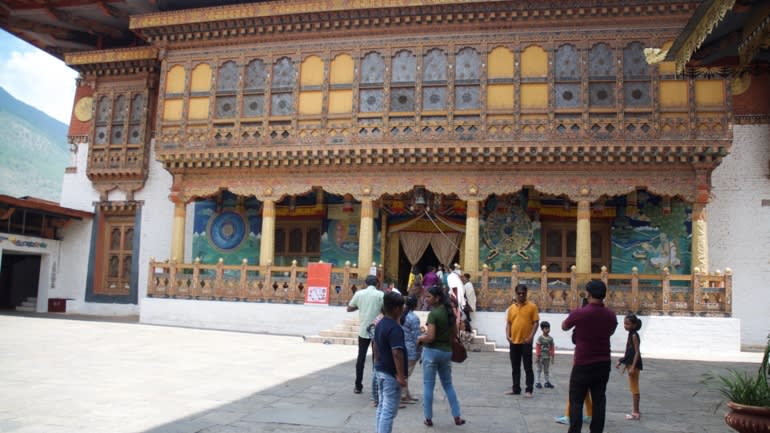 The tourist industry is already facing a glut of infrastructure in the western districts, which draw the most visitors. According to Bhutan's central bank, the ratio of nonperforming loans as of June 2019 was the highest in the service and tourism sectors at 31.2%. Most of the loans were for building new tourism infrastructure.

Discussions in parliament did not directly address the impact on hotel operators. But the foreign minister said that while it was still too early to predict the impact of the SDF, the government would consider fiscal incentives if hoteliers are affected. The hotel and restaurant association and the Tourism Council of Bhutan are reportedly working on crafting new regulations and standards for budget hotels to cater to regional tourists.

"We will have to see what happens," said Ugyen Norbu, who operates a three-star hotel in the capital. "Since the SDF means an additional cost for regional visitors, we will have to lay off staff and offer fewer facilities to remain competitive," he said.

The impact is already being felt even though the SDF will not go into effect until July. "Last year by this time, we had bookings till October," said Sonam Choden, who runs the Asian Kitchen Hotel in the border town of Phuentsholing, the main overland entry point from India. "This time bookings have dropped significantly."