LONDON/NEW YORK -- When U.S. Treasury Secretary Janet Yellen participated in a virtual meeting of the Group of Seven finance ministers and central bank governors Friday, host Rishi Sunak, the U.K.'s chancellor of the exchequer, and other members took turns welcoming her to her first G-7 meeting in the new capacity.

Yellen has participated in these meetings many times as chair of the Federal Reserve.

But the warm reception seemed to be about more than just her unique resume. The other G-7 members -- the U.K., Canada, France, Germany, Italy and Japan -- were embracing the return of the U.S. to the multilateral order.

Right off the bat, Yellen made that clear. The administration of U.S. President Joe Biden is committed to multilateralism to solve global issues, she told participants.

The U.S. "places a high priority on deepening our international engagement and strengthening our alliances," she said. 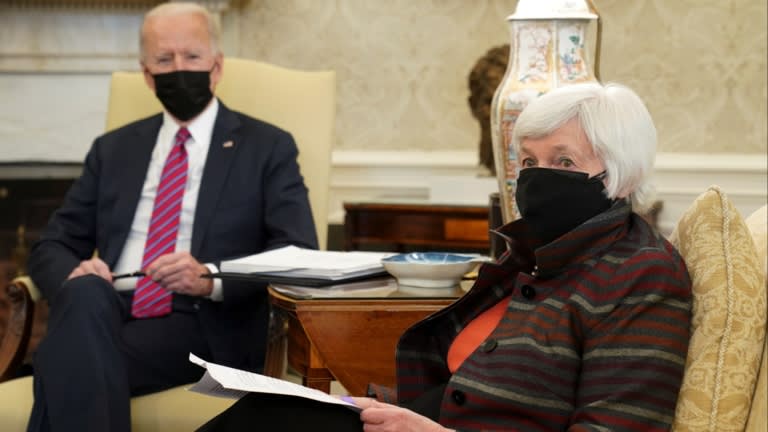 Next week, Biden himself will be on the world stage, expressing his intent to work with like-minded countries.

On Friday, he will take part in a virtual meeting of Group of Seven leaders, hosted by British Prime Minister Boris Johnson.

The same day, Biden will participate in a virtual event of the Munich Security Conference, the world's leading forum for foreign and security policy. "He will speak on the importance of our trans-Atlantic ties and the need for the United States and Europe to take on global challenges together," White House press secretary Jen Psaki told reporters Friday.

It is a far cry from the "America first" stance of Biden's predecessor Donald Trump.

Trump-era Treasury Secretary Steven Mnuchin told reporters in 2017 that the U.S. reserved the "right to be protectionist" on trade. That comment, which came after a meeting of G-7 finance ministers and central bankers, caused a rift among members.

When Trump attended his first United Nations General Assembly in the fall of that year, he said definitively that "our government's first duty is to its people, to our citizens -- to serve their needs, to ensure their safety, to preserve their rights, and to defend their values."

The following year, he went one step further, rejecting globalization. "America is governed by Americans. We reject the ideology of globalism, and we embrace the doctrine of patriotism," he proclaimed. The pillar of Biden's foreign policy is to create a position of strength by aligning with allies. His national security adviser, Jake Sullivan, has said that leverage can be gained when America is in "lockstep" with its democratic allies and partners. He calls for a "chorus of voices" that can drive a policy forward.

As a first step, Yellen told her G-7 partners that it was important to provide further fiscal support to promote a robust and lasting recovery. "The time to go big is now," she said.

She expressed strong support for G-7 efforts to tackle climate change, highlighting that her colleagues should expect the Treasury Department's engagement on this issue to change dramatically relative to the last four years. The secretary noted that "we understand the crucial role that the United States must play in the global climate effort."

The G-7 faces multiple issues that demand a united front to push back against China.

One major topic is debt reduction for developing countries economically ravaged by the coronavirus. In a November meeting of Group of 20 finance ministers and central bankers, members agreed on a debt relief framework. This year's G-20 summit is set to take place in Rome, where new Italian Prime Minister Mario Draghi will host leaders in October. Draghi, a former president of the European Central Bank, is also a multilateralist.

China has been accused of debt trap diplomacy -- saddling participants in its Belt and Road infrastructure-building initiative with large amounts of debt, then taking control of strategic ports and natural resources as collateral when they default on the loans.

China is also a step ahead of the G-7 when it comes to issuing a digital currency. The People's Bank of China is field-testing digital yuan in hopes of launching it before the 2022 Winter Olympics in Beijing.

There is concern that Chinese authorities will have access to transaction histories of individuals and businesses that use digital yuan. "We need to have a very detailed discussion" at the G-7 meeting, Japanese Finance Minister Taro Aso told reporters Tuesday.

But how much common ground the G-7 can find remains unclear, even with the renewed American internationalism under Biden. One example is the international framework on taxing technology giants such as Google, Apple, Facebook and Amazon.com. "There's now a possibility that we'll have something tangible by spring," Aso told reporters after Friday's meeting.

Negotiations to create such a framework stalled under the Trump administration, which worried that digital taxes would hinder U.S. companies.

Yellen does not appear fully on board with digital taxes, which could negatively affect America.

G-7 countries have taken significant economic hits from the coronavirus. Only the U.S. is expected to bring gross domestic product back to pre-pandemic levels in 2021, thanks largely to heavy fiscal stimulus.

Real recovery still remains far off. Should G-7 members focus too heavily on reviving their own domestic economies, the bloc as a whole risks losing global clout.

Then there is the question of whether the U.S. return to multilateralism is here to stay.

Thomas Wright, director of the Center on the United States and Europe at the Brookings Institution, said in a symposium on Feb. 8: "Even though we now have a government that wants to engage in multilateralism," Trumpism is still a force to be reckoned with. "It's quite possible that if President Biden were to rejoin certain institutions, the next president would simply leave them."

"That raises not just a credibility and commitment problem, but a real sort of question about how do you embed that cooperation in a way that's sustainable and predictable," Wright said.