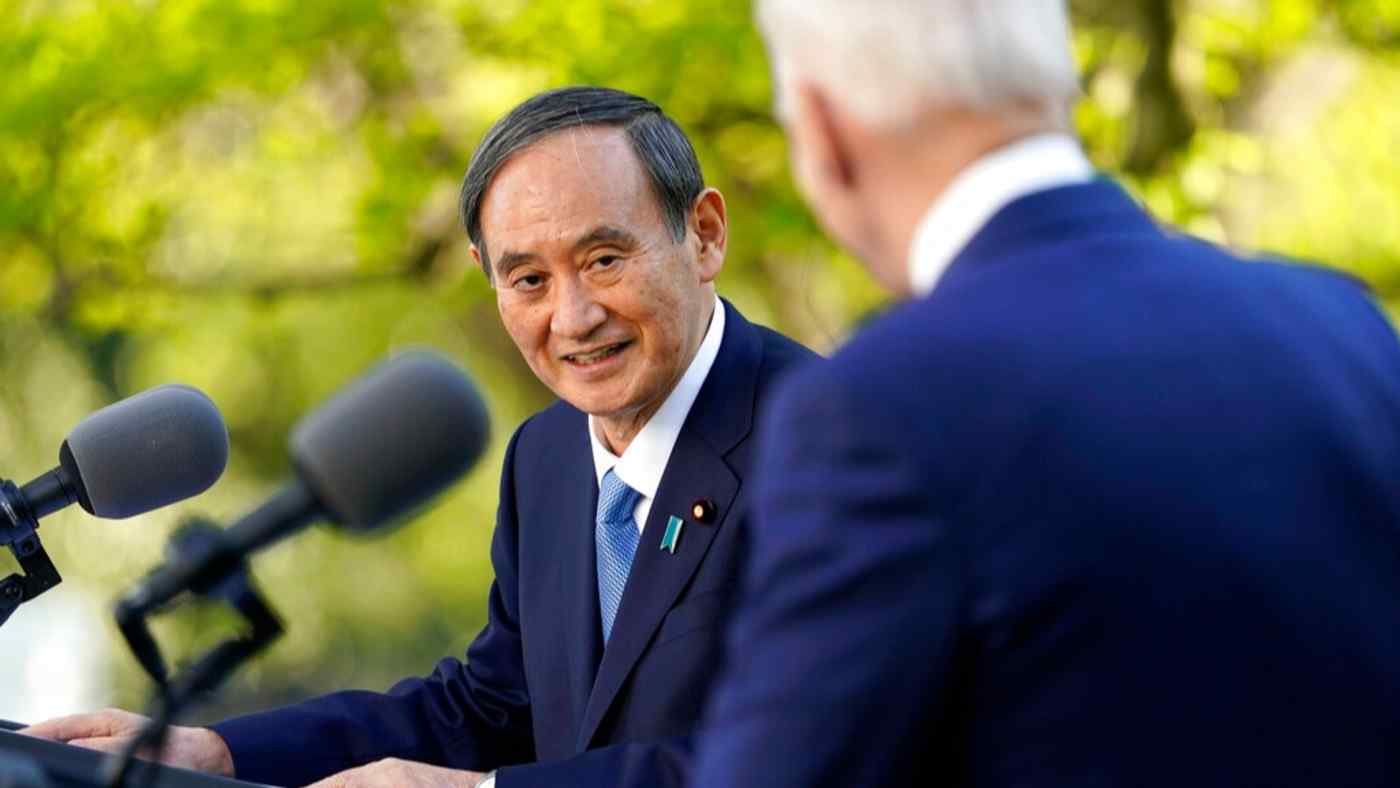 WASHINGTON -- U.S. President Joe Biden and Japanese Prime Minister Yoshihide Suga underscored "the importance of peace and stability across the Taiwan Strait" and encouraged "the peaceful resolution of cross-Strait issues" in a joint statement issued after their first face-to-face meeting on Friday.

"We share serious concerns regarding the human rights situations in Hong Kong and the Xinjiang Uyghur Autonomous Region," it said.

The last time that Taiwan was mentioned in a U.S.-Japan leaders statement was in 1969, when President Richard Nixon and Prime Minister Eisaku Sato did so.

In their meeting at the White House, Biden affirmed his "ironclad support" for the U.S.-Japan alliance.

Vowing to work together "to take on the challenges from China" and to ensure that the future of the Indo-Pacific is "free and open," the president said in a joint press conference that the U.S. and Japan will "prove that democracies can still compete and win in the 21st century."

Suga, for his part, said that the two leaders agreed to "oppose any attempts to change the status quo by force or coercion," in a dig at China.

When asked by a reporter if the Taiwan Strait was discussed at the summit, the prime minister replied: "As we engaged in an exchange of views over the regional situation, we also discussed the circumstances in Taiwan and the Xinjiang Uyghur Autonomous Region as well."

"I refrain from mentioning details since it pertains to diplomatic exchanges, but there is already an agreed recognition over the importance of peace and stability of the Taiwan Strait between Japan and the United States, which was reaffirmed on this occasion," he said.

Taiwan on Saturday welcomed the Suga-Biden statement, with its foreign ministry expressing "sincere gratitude" for the "recognition of the importance of peace and stability in the region across the Taiwan Strait."

"Taiwan, located in an important position in the first island chain, continues to play a key role in regional stability and prosperity and also shares the same feelings with regional countries over the threats and aggression via land, maritime and aerospace," the ministry said. 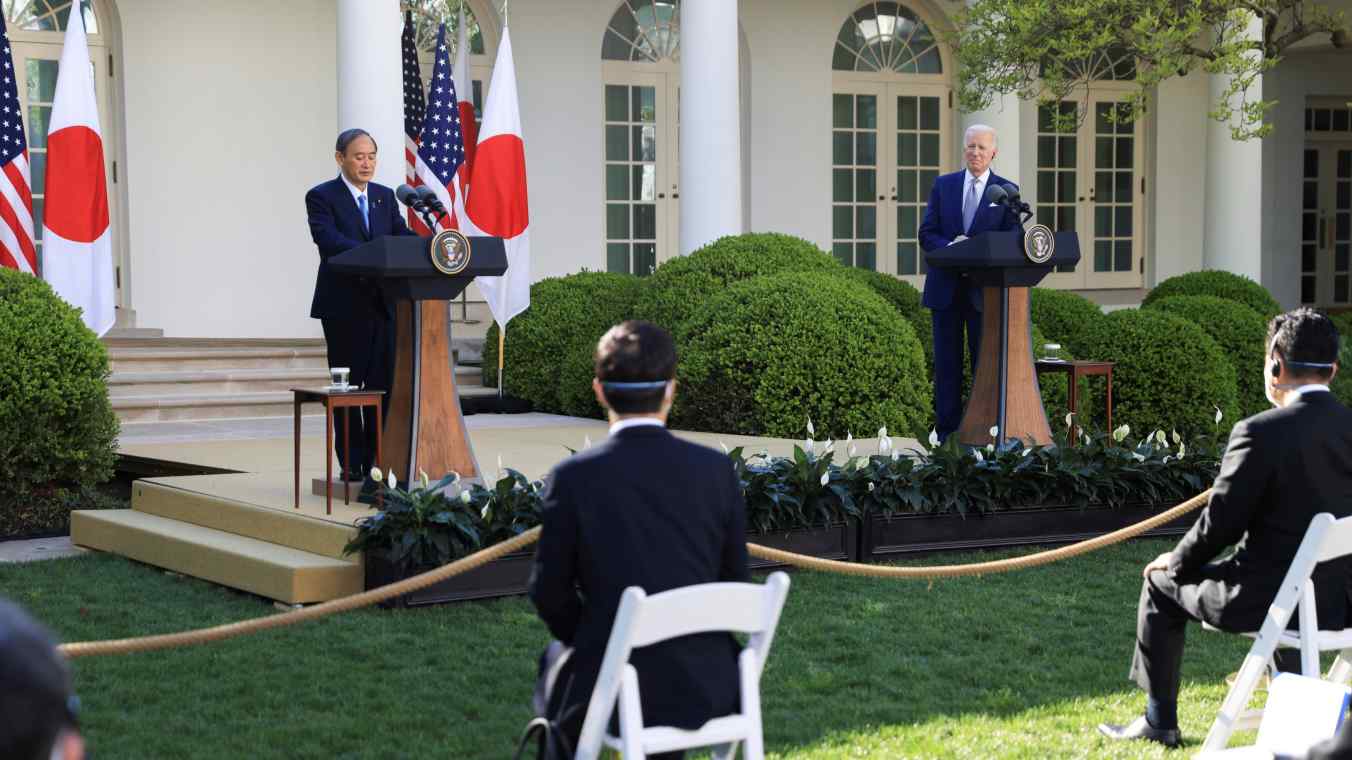 Last month, in a joint statement issued after the two-plus-two meeting of foreign affairs and defense ministers in Tokyo, the two sides "underscored the importance of peace and stability in the Taiwan Strait."

This time, they added that they "encourage the peaceful resolution of cross-Strait issues." The wording on human rights was identical to the two-plus-two statement.

Speaking to Japanese reporters after the meeting, Suga emphasized that the priority was to seek a peaceful resolution to the region's issues.

"It is true that the situation is tense in the Taiwan Strait and around the Senkaku [Islands]," Suga said. "Under such circumstances, the priority is a peaceful resolution. We agreed to proceed in that direction, advancing peace, safety and security."

In a speech to the Center for Strategic and International Studies think tank Friday evening, Suga said that "what we always have in mind is not force or coercion, but our firm belief that a rules-based free and open order -- this is what brings peace and prosperity to the region and the world."

Japanese government officials were tight-lipped about the discussions on Taiwan. "There was a frank exchange of views regarding Taiwan. But we do not want to go into detail about what was discussed," a senior government official told reporters after the meetings.

Mike Mochizuki, a political scientist at George Washington University, said "because of the importance of Japan, the United States is more willing to listen to what Japan has to say. The challenge for Japan is to figure out what it wants to say."

"When I look at Japan's real interests, although Japan has concerns about China, it does not want the U.S.-China competition to intensify so much that the risk of military conflict increases," he said.

That could explain the lack of enthusiasm on the Japanese side to disclose the discussions on Taiwan.

Biden and Suga agreed that cutting-edge technologies should be governed by norms set by democracies, not autocracies. They affirmed cooperation on COVID-19 vaccines and climate change. The joint statement said that "President Biden supports Prime Minister Suga's efforts to hold a safe and secure Olympic and Paralympic Games this summer."

But these topics paled beside the need to take a common stand on China.

Longtime Japan watcher Matthew Goodman, senior vice president for economics at CSIS, said in a media briefing Thursday: "I have been involved with Japan for almost 40 years, and I've seen a lot of U.S.-Japan summits. And I'm confident that this is the first time there has been a summit in that time in which trade was not at the top of the agenda."

The two leaders began with a 20-minute sit-down, accompanied only by interpreters. Biden greeted his guest with hamburgers, but Suga later told the traveling press that he ended up not touching his because the two leaders were busy discussing their families and life experiences.

All in all, the two leaders spent two and a half hours meeting, far longer than originally planned, the Japanese government briefed reporters.

Suga could not bring his cabinet members with him, owning to COVID-19 restrictions, but the full "A-team" attendance of the Biden administration showed just how much the president is invested in the alliance.

And Biden has domestic motivations for this, said Michael Green, senior vice president for Asia and Japan chair at CSIS.

"The president emphasizes bipartisanship but you don't see it on display with the infrastructure bill and domestic policy," Green said. "Where you see bipartisanship is on foreign policy and especially on Asia and the U.S.-Japan alliance."

"For the Biden administration, a strong summit with Prime Minister Suga shows his bona fides to the public, to the Congress -- where there is very strong support for working with allies," he said.

Biden opened the extended meeting in the White House's State Dining Room by noting that Suga was "the first foreign leader to visit me in my presidency."

Sitting in front of the flags of the U.S. and Japan, he added that "we are two important democracies in the Indo-Pacific region." 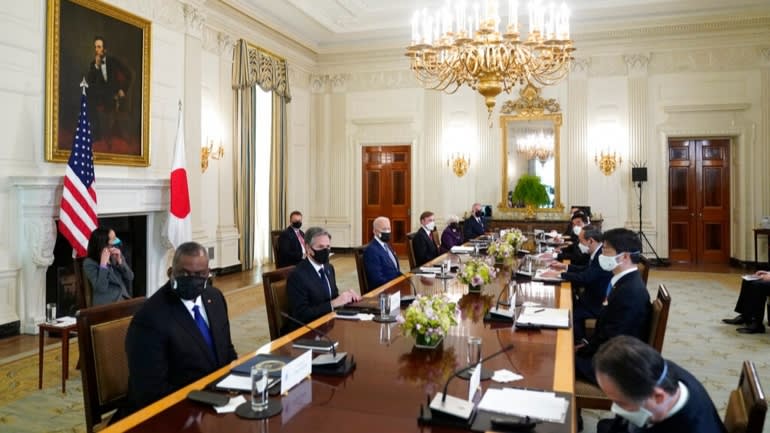 "Yoshi, you'll probably be seeing a lot more of me in the future," Biden said at the post-meeting press conference in the Rose Garden. Suga reciprocated the first-name exchange somewhat stiffly, saying that "I look forward to the actual implementation of the outcomes of today's significant meeting and to realize a free and open Indo-Pacific by further collaboration and deeper cooperation with Joe."

The red-carpet treatment is to signal the importance the Biden administration places on its alliances in Asia in the face of a rising China.

Suga will be followed by South Korean President Moon Jae-in, who will visit Washington in late May.