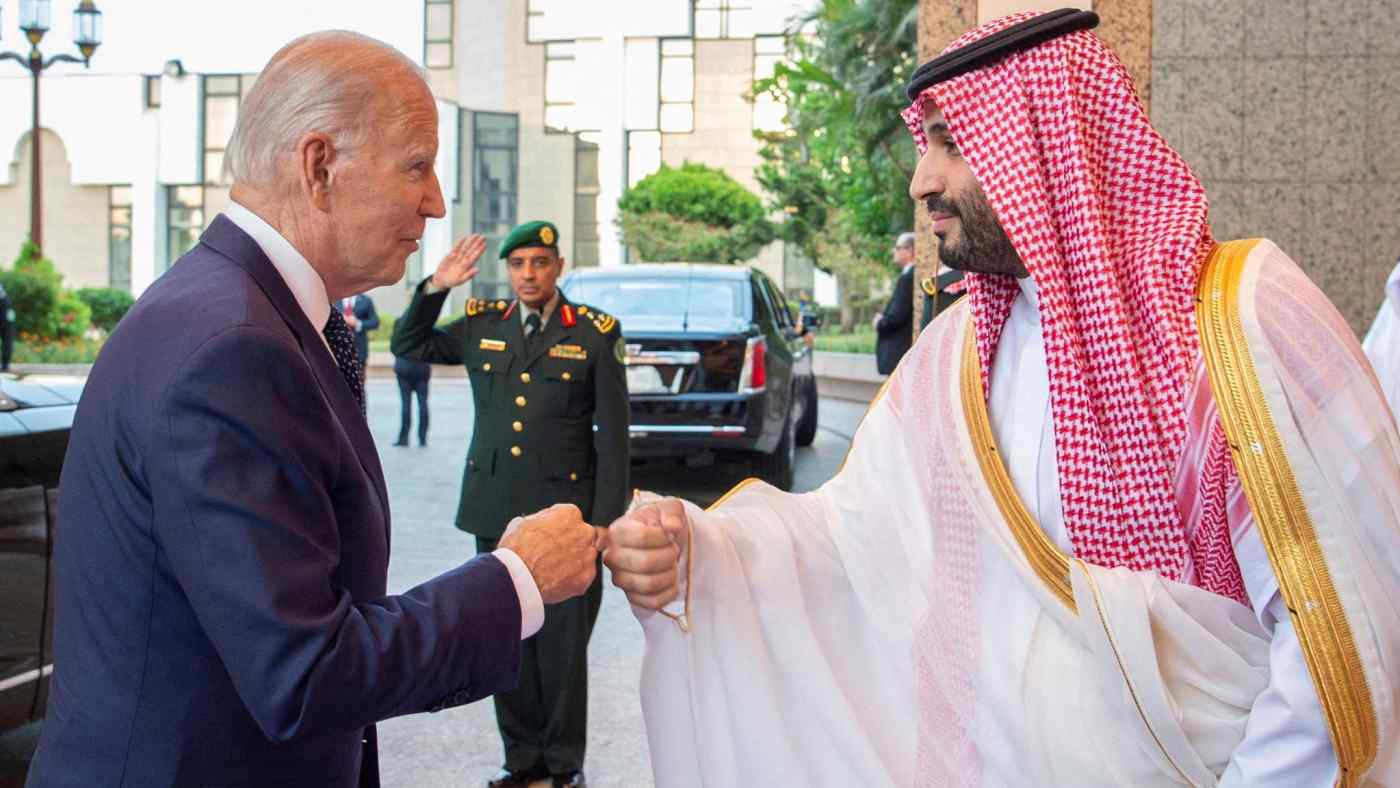 JEDDAH, Saudi Arabia (Reuters) -- Joe Biden began a visit to Saudi Arabia on Friday by giving Crown Prince Mohammed bin Salman a fist bump and shaking hands with King Salman as Washington looks to reset its relationship with a country that the U.S. president once pledged to make a "pariah" on the global stage.

Energy and security interests prompted Biden and his aides to decide not to isolate the Gulf oil giant that has been strengthening ties with Russia and China.

But the U.S. national security adviser dampened expectations of any immediate oil supply boost to help bring down high costs of gasoline and ease the highest U.S. inflation in four decades.

Biden, who said he would discuss human rights during the visit, was met by Prince Khalid al-Faisal, the governor of Mecca province, which includes the Red Sea city of Jeddah.

The visit is being closely watched for body language and rhetoric. Biden made his "pariah" comment less than two years ago over the 2018 murder of Washington Post journalist Jamal Khashoggi, a Saudi insider-turned-critic, by Saudi agents.

At the start of Biden's Middle East trip, officials said he would avoid close contacts, such as shaking hands, as a precaution against COVID-19. But the president ended up engaging in hand-shaking during the Israel leg of the tour.

After meeting the king, Biden and his team entered a conference room for a working session with the crown prince and Saudi ministers. "Welcome to Saudi Arabia," MbS told Biden.

When opening statements were completed, several U.S. reporters shouted questions about Khashoggi at the crown prince. "Will you apologise to his family?" one shouted. MbS, with the Saudi energy minister seated beside him, did not respond and appeared to smile slightly as the reporters were led from the room.

U.S. intelligence concluded that MbS, the kingdom's de facto ruler, directly approved the killing of Khashoggi inside the Saudi consulate in Istanbul, while the crown prince denies having a role.

The sensitive visit will test Biden's ability to reset relations with the prince. Biden wants to "recalibrate" Washington's relations with Saudi Arabia and not rupture them, U.S. national security adviser Jake Sullivan said.

Biden said he would raise human rights in Saudi Arabia, but he did not say specifically if he would broach the Khashoggi murder with its leaders.

Saudi ambassador to Washington Reema bint Bandar Al Saud, who was part of the Saudi greeting party, reiterated in an article for Politico the kingdom's "abhorrence" of the killing, describing it as a gruesome atrocity, and said it cannot define U.S.-Saudi ties.

She said the relationship should also not be seen in the "outdated and reductionist" oil-for-security paradigm.

Typically, the White House releases names ahead of landing of foreign officials who will welcome the president, but this time details only came out after Biden left the airport.

When former U.S. President Donald Trump, who enjoyed close ties with MbS, visited Saudi Arabia in 2017 he was met by King Salman, who has made few recent public appearances. The Mecca governor met France's president when he visited Jeddah late last year.

Jeddah hosts a larger gathering of Arab leaders on Saturday.

Biden will discuss energy security with leaders of Gulf oil producers and hopes to see more action by OPEC+ to boost output, but there were unlikely to be any bilateral announcements from the talks, Sullivan told reporters en route to Jeddah.

"We believe any further action taken to ensure that there is sufficient energy to protect the health of the global economy, it will be done in the context of OPEC+," said Sullivan. "We are hopeful that we will see additional actions by OPEC+ in coming weeks."

The OPEC+ group that includes Russia meets next on Aug. 3.

Biden will also encourage peace and press for a more integrated Middle East during his trip, an administration official said. Topics include strengthening a truce in Yemen, "balance" in energy markets and technological cooperation in 5G and 6G.

Ahead of the visit, Saudi Arabia said it would open its airspace to all air carriers, paving the way for more overflights to and from Israel, in what Biden described as a historic and important step towards building a more integrated and stable Middle East.

Biden was the first American president to fly from Israel directly to Jeddah, a step the White House says represents a "small symbol" of warming Israeli-Saudi ties. Two years ago, Riyadh gave a tacit nod for the United Arab Emirates and Bahrain to normalise relations with Israel.

The U.S.-brokered deals known as the Abraham Accords established a new axis in the region, where Gulf states share Israel's concerns about Iran's nuclear and missiles programmes and proxy network. Sunni Muslim Saudi Arabia and Shi'ite Muslim Iran have for years vied for regional influence but launched direct talks last year in an effort to contain tensions.