Biden: 'We are in a competition with China to win the 21st century' 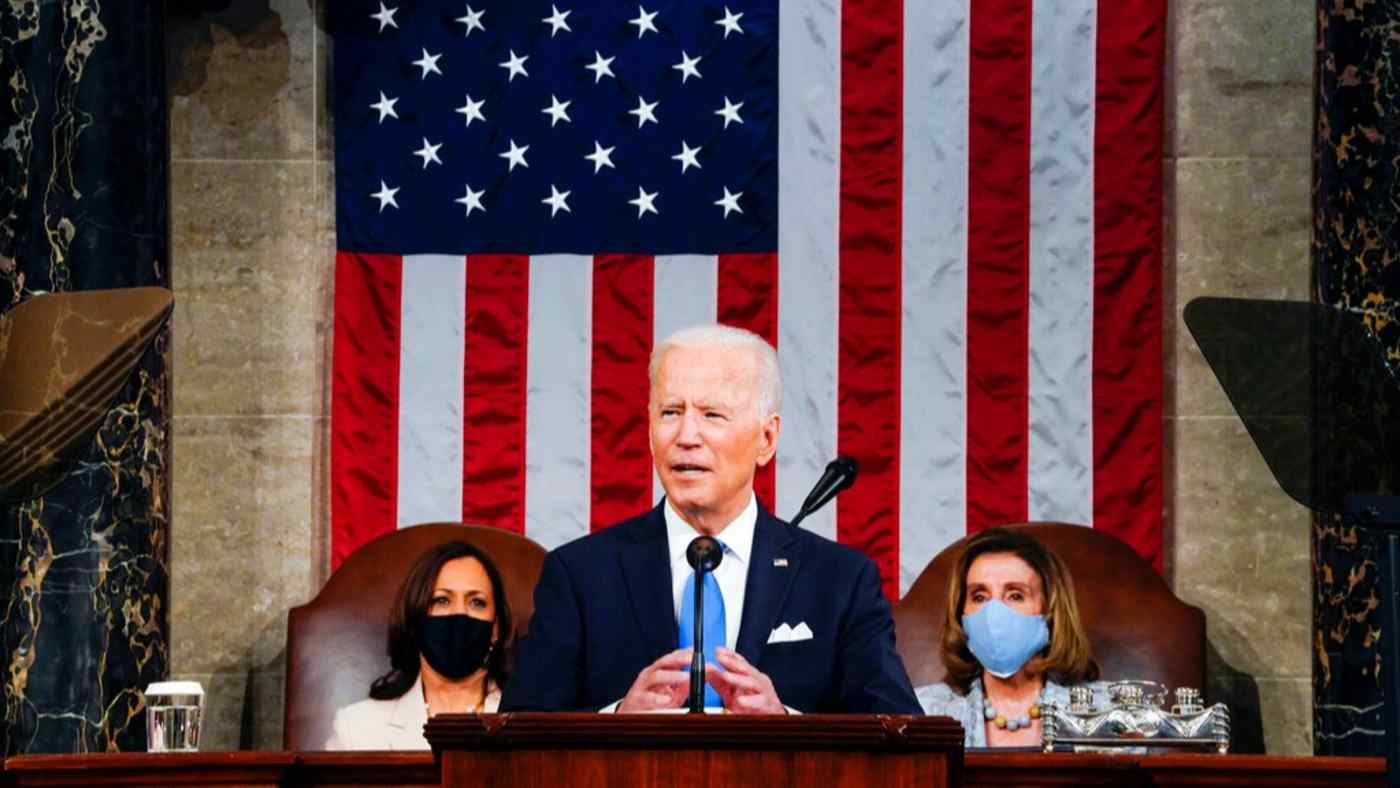 NEW YORK -- As U.S. President Joe Biden's first 100 days draw to a close, he has one key message to the nation and the world: "America is on the move again."

In his first speech to Congress Wednesday night, Biden introduced an ambitious plan to strengthen U.S. national power, from adding four more years to free public education to boosting investment in research and development. The goal is simple: to fend off the challenge of China.

"We're in a competition with China and other countries to win the 21st Century," the president said to a standing ovation.

On foreign policy, Biden said that he has told Chinese President Xi Jinping that the U.S. will maintain a strong military presence in the Indo-Pacific, "just as we do with NATO in Europe, not to start conflict but to prevent conflict."

Shortly after 9 p.m. the 78-year-old president entered the House chamber to scattered applause, passing by largely empty aisles. Biden gave the speech under heightened security and social distancing measures, with only around 200 masked people in attendance. 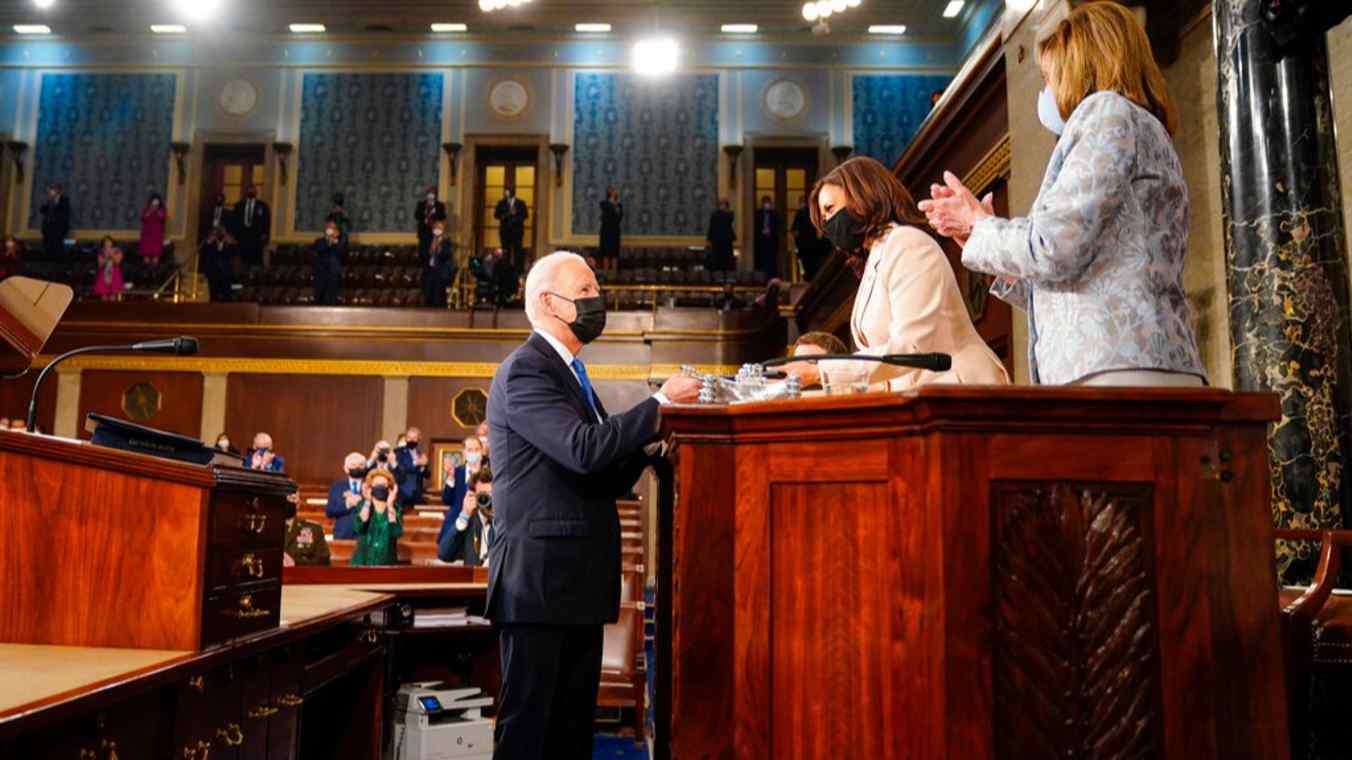 The unusual setting serves as a reminder that it has been only a few months since the U.S. Capitol was stormed on Jan. 6 by protesters claiming the presidential election was stolen from Biden's immediate predecessor, Donald Trump, and that the nation is still grappling with the coronavirus pandemic.

Biden opened the speech by saying that he, along with all Americans, inherited a nation in crisis, citing "the worst pandemic in a century, the worst economic crisis since the Great Depression, the worst attack on our democracy since the Civil War."

But, "after 100 days of rescue and renewal, America is ready for takeoff, in my view," said Biden in the State of the Union-style address. "We're working again, dreaming again, discovering again and leading the world again." 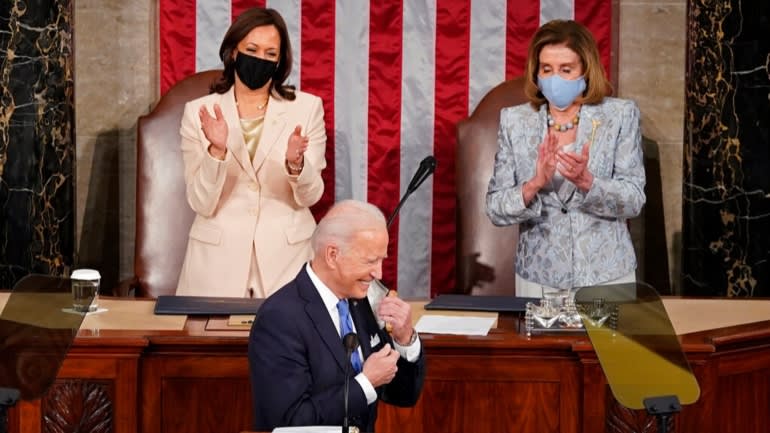 Only around 200 people attended Biden's speech, rather than the usual 1,600, due to COVID restrictions and security measures.   © AP

Before his inauguration, many policy watchers expected Biden's early presidency to be consumed by domestic issues, and that has in large part been the case. The top achievements the president highlighted on Wednesday include administering of some 200 million doses of COVID vaccines -- double his original promise -- and the passage of a $1.9 trillion economic stimulus package.

He also used the occasion to make the case for two other spending bills: the American Jobs Plan and the American Families Plan, which would total over $4 trillion in spending. Together the proposals would invest in infrastructure, including in the digital sphere, as well as giving Americans additional welfare benefits, such as more health care, and another four years of free education by raising taxes on the top 1%.

The proposals would mean a massive expansion of the government and they are likely to be met with stiff pushback from Republicans.

But the implications of these efforts to rebuild the nation are not simply domestic, according to Biden and his team. "The investments I've proposed tonight also advance a foreign policy that benefits the middle class," Biden said in his Wednesday remarks.

"There's simply no reason why the blades for wind turbines can't be built in Pittsburgh instead of Beijing," he said of the American Jobs Plan. In fact, the sweeping infrastructure bill has the explicit objective of helping the U.S. outcompete China. 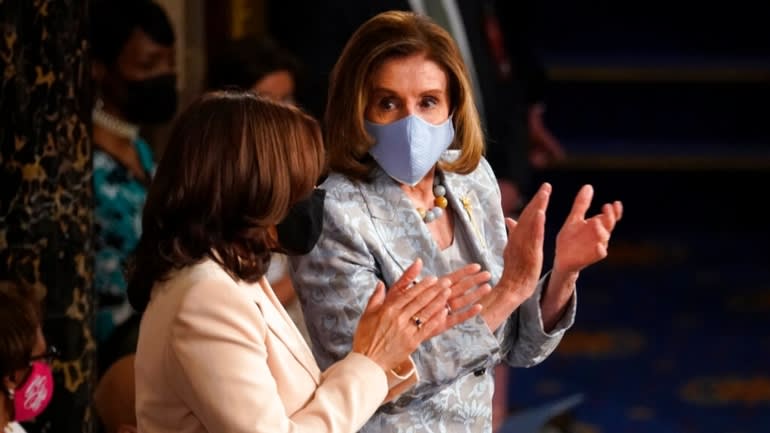 Biden also said that when he spoke with Chinese President Xi Jinping, "I told him that we welcome the competition."

"We are not looking for conflict," Biden continued. "But I made absolutely clear that I will defend American interests across the board" and stand up against unfair trade practices, including state subsidies the theft of American technologies and intellectual property.

"I told him what I've said to many world leaders -- that America won't back away from our commitment to human rights and fundamental freedoms."

Ryan Hass, a former National Security Director for China, Taiwan and Mongolia and now a senior fellow at the Brookings Institution, a Washington think tank, said that under the Biden administration, the Sino-American relationship is "moving gradually from sharp confrontation to deep competition."

In its first 100 days, the Biden administration is trying to convey to China the message: "Don't underestimate the United States. We are capable of self correction. We do believe that our best days are still ahead of us. Don't think of our focus on values and human rights [as] platitudes," Hass said at a Tuesday panel on U.S.-China relations on Biden's first 100 days hosted by the U.S.-China Education Trust and the American Chamber of Commerce in China. 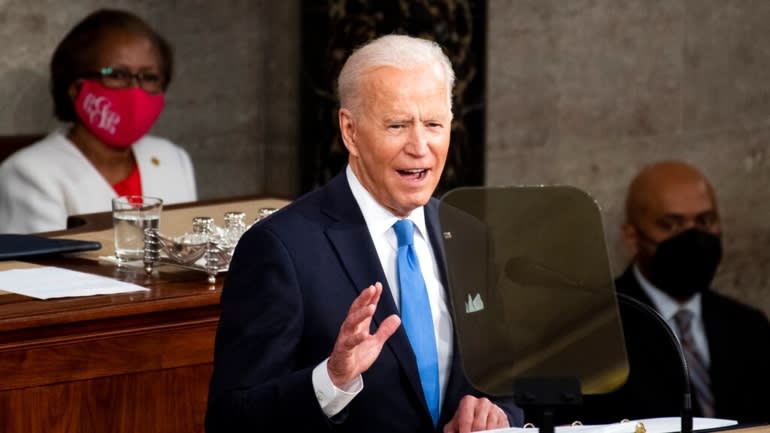 Biden said he told Chinese President Xi Jinping: "We will maintain a strong military presence in the Indo-Pacific just as we do with NATO in Europe, not to start conflict but to prevent conflict."   © AP

The Biden administration has repeatedly made clear that an important piece of America's plan to win the great power competition with China is bolstering its alliances. Japan looks to be on top of its list of priorities. This month, Biden welcomed Japanese Prime Minister Yoshihide Suga as the first head of state to visit Washington during his presidency.

A joint statement from the two leaders said Washington and Tokyo will work together "to take on the challenges from China," and to ensure a "free and open" Indo-Pacific, while also referencing "the importance of peace and stability across the Taiwan Strait," as well as China's conduct in Hong Kong, Xinjiang and Tibet -- issues Beijing has warned both leaders to stay clear of.

Japan was also on the itinerary of Secretary of State Antony Blinken and Secretary of Defense Lloyd Austin during their first trip abroad, their other destination being South Korea. The top U.S. foreign policy duo met with their Japanese and South Korean counterparts -- including a trilateral meeting -- to discuss issues such as North Korea.

Biden was also quick to touch base with America's partners in the Quad -- the Quadrilateral Security Dialogue -- with a virtual summit in March.

In contrast, sparks flew at the first high-level meeting between Washington and Beijing. Blinken and national security adviser Jake Sullivan met with China's foreign policy masterminds, Yang Jiechi and Wang Yi, who hit back with a tirade on America's own crisis of democracy and human rights record, pointing to its history of ill treatment of African Americans. 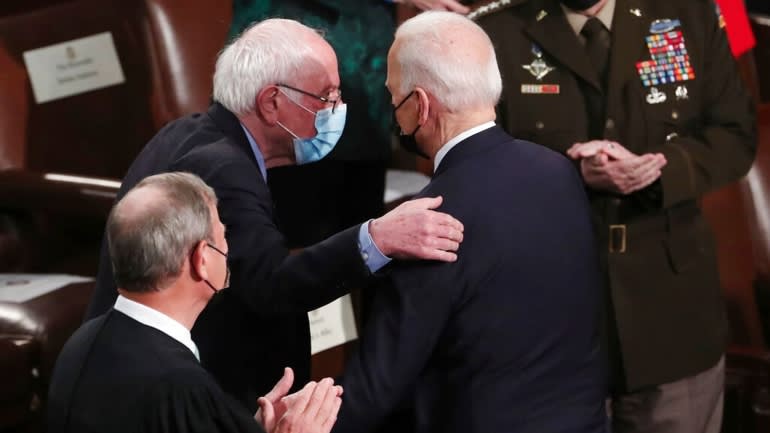 The Biden administration is still in the midst of a lengthy policy review of U.S. strategy on China. So far, many of former President Donald Trump's policies remains in place, including punitive trade tariffs. In some cases, such as the so-called technology decoupling, the Biden team appears to be doubling down, adding restrictions on Chinese companies and pushing plans to invest heavily in America's own tech sector.

But these grand strategies also rest on America's ability to contain COVID-19 as well as help other countries combat the pandemic.

"There's no wall high enough to keep any virus away," Biden said. "As our own vaccine supply grows to meet our needs -- and we are meeting them -- we will become an arsenal of vaccines for other countries, just as America was the arsenal of democracy in World War II."

On this front, his administration is also competing with Beijing, which is trying to win favors around the world with its own vaccine diplomacy.