National security adviser vows to build on Quad with Japan, India and Australia

NEW YORK -- U.S. President Joe Biden will join hands with like-minded allies to form a "chorus of voices" that can push back against China in the great-power competition, new national security adviser Jake Sullivan said Friday.

Most crucial of those partners will be the Europeans, Sullivan said, as an aligned trans-Atlantic alliance will put America in a position of strength to fend off threats to its way of life -- the climate crisis, nuclear proliferation, cyberattacks, the continuing economic devastation around the world and more.

The 44-year-old adviser spoke at an online event hosted by the Washington-based United States Institute of Peace. Titled "Passing the Baton 2021: Securing America's Future Together," it also featured Robert O'Brien, who immediately preceded him as national security adviser under then-President Donald Trump, and Condoleezza Rice, who served as national security adviser and later secretary of state under then-President George W. Bush in the 2000s.

Washington has four major steps to take on the challenges it faces, Sullivan said.

First, it must counter Beijing's diplomatic narrative that the Chinese model is better than the American model, he said. U.S. national security adviser Jake Sullivan speaks at an online event of the United States Institute of Peace on Jan. 29.

"They're pointing to dysfunction and division in the United States and saying, 'Take a look at that. Their system doesn't work. Our system does.' And increasingly over the last few years you've heard their leaders right from the top speak more explicitly in these terms," Sullivan said.

So the U.S. must "refurbish the fundamental foundations of our democracy" by reforming the democratic system itself and tackling such issues as racial inequity and economic inequality, he said.

Step two, Sullivan said, "is to recognize that we are going to be most effective in advancing our vision for what a free, prosperous, equitable society looks like if we are doing so in lockstep with democratic allies and partners."

America alone only represents a quarter of the global world's economy, he said, but together with allies and partners in both Europe and Asia, "we represent well more than half of the world's economy."

"And that provides us, not just the kind of leverage we need to be able to produce outcomes, but it provides us a chorus of voices that can drive the argument that says we are going to stand up for a certain set of principles in the face of aggression" and the steps China is taking, he added.

Sullivan's third point was on cutting-edge technology. The U.S. must make ambitious public investments to lead the world on "key emerging technologies of the future: artificial intelligence, quantum computing, biotechnology, clean energy and so much else," he said. He expressed optimism about winning bipartisan support for such efforts. "And then the last piece is speaking with clarity and consistency on these issues and being prepared to act as well -- to impose costs," Sullivan said. He noted that the president, the State Department, the Pentagon and every embassy around the world intend to speak in one voice when confronting "what China is doing in Xinjiang, what it's doing in Hong Kong, for the bellicosity of threats that it is projecting towards Taiwan."

After his predecessor O'Brien spoke of the Quad -- the Quadrilateral Security Dialogue of the U.S., Japan, India and Australia -- as possibly "the most important relationship we've established since NATO" at a high level, Sullivan indicated that the Biden administration wants to receive the baton in stride.

"Robert mentioned the Quad. ... There, too, I think we really want to carry forward and build on that format, that mechanism, which we see as fundamental, a foundation upon which to build substantial American policy" in the Indo-Pacific region, Sullivan said.

Biden's election campaign messaging put heavily emphasis on working with allies. But Sullivan said the most important of those alliances will be the trans-Atlantic relationship.

"The foundation upon which we are going to effectively be able to prevail in geopolitical competition" will be America's alliances, Sullivan said, adding that "none are more critical than the trans-Atlantic alliance." 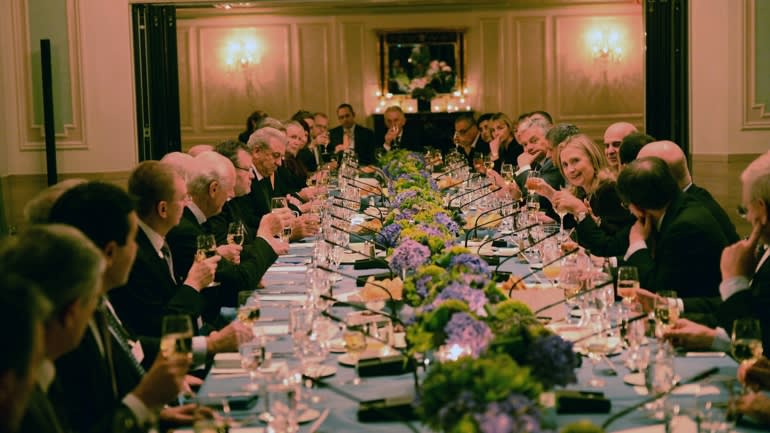 Then-U.S. Secretary of State Hillary Clinton hosts a trans-Atlantic dinner for foreign ministers from European Union and NATO countries in New York in September 2012. Jake Sullivan called the trans-Atlantic alliance the most crucial to the Biden administration. (Photo courtesy of U.S. State Department)

Sullivan said Dean Acheson, a secretary of state in the Truman administration, thought that "the basic thrust and purpose of American foreign policy" had to be to create "situations of strength" so that when contending with an adversary or a significant challenge, the U.S. would be at "a point of maximum advantage" to deal with it.

"And that's basically the mindset that I come to this job with, which is, 'How do we create those situations of strength?'" he said.

While Sullivan acknowledged that the U.S. and Europe do not have entirely aligned perspectives on such issues as trade, he expressed a desire to work hard toward a common picture on the threats faced and the actions required.

"I think China is right at the top of the list of things that we've got to work together on and where there is work to do to get fully aligned," he said.