TOKYO/SEOUL -- U.S. President Joe Biden arrived in Japan on Sunday afternoon, starting the second half of his Asia trip.

Air Force One arrived shortly past 5 pm at Yokota Air Base in western Tokyo, after an hour-and-45-minute flight over from Osan Air Base in South Korea.

His three-day stay includes an audience with the Japanese Emperor Naruhito, a meeting and dinner with Prime Minister Fumio Kishida and an in-person meeting of the Quad, with leaders of India and Australia.

The new leader's attendance, just hours after being sworn in, "is a real testament to Australia's investment in the Quad as a critical vehicle for the Indo-Pacific and this new prime minister's investment in hitting the ground running," Sullivan said.

Biden kicked off his final day in Seoul by attending a private mass at the Grand Hyatt Hotel along with other White House staff.

He then met Euisun Chung, the executive chair of the Hyundai Motor Group, to discuss the automaker's new investment in the U.S.

"It's great to be here to announce the more than $10 billion in new investment in American manufacturing. This new commitment of 5 billion for advanced automotive technology and 5.5 billion investment to open a new factory near Savannah, Georgia is going to create more than 8,000 new American jobs," the president told reporters after the meeting at the Hyatt. 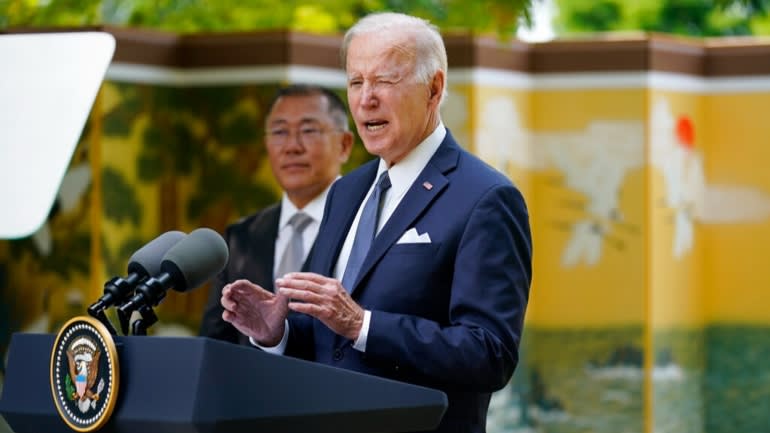 He then met with staff from the U.S. Embassy before moving to Osan Air Base.

Regional security will be the top agenda for the meetings in Japan, after Russia's invasion of Ukraine raised worldwide concerns over autocracies attempting to change the geopolitical status quo by force.

Biden and Kishida will discuss ways to strengthen their alliance to deter China from taking action in the Taiwan Strait, as Beijing ramps up pressure by sending military aircraft into Taiwan's Air Defense Zone.

Their joint statement will state a policy of cooperation to "deter and respond to" China's activities in the Indo-Pacific region, Nikkei earlier reported.

"I would like to discuss the realization of a 'free and open Indo-Pacific' based on strengthening the Japan-U.S. alliance," Kishida told Nikkei in an exclusive interview on Friday ahead of the summit meeting. "I believe that in these uncertain times, the relationship of trust between political leaders is more important than anything else."

On the economic front, the president will announce the launch of the Indo-Pacific Economic Framework, or IPEF, which would facilitate cooperation between the U.S. and its Asian partners in areas such as supply chain resilience and environment but does not lower tariffs.

The U.S. hopes to increase its economic presence in the region through the new framework following its withdrawal from the Trans-Pacific Partnership agreement in 2017. Which countries in the region participate in the framework, and which do not, will be closely watched.