TOKYO -- As Joe Biden approaches the 100-day mark of his presidency, observers in Asia give the U.S. leader high marks for his emphasis on international cooperation and climate change -- both clear breaks with his predecessor Donald Trump.

But panelists speaking on Tuesday in an online discussion hosted by the Financial Times and Nikkei also voiced concern about the widening divide between the U.S. and China, stressing that the emerging Asian superpower cannot be simply excised from globalization.

The U.S. has "reset the global agenda by strengthening international cooperation, shifting away from a unilateral approach to leverage the strength of allies and global institutions to see tangible outcomes," Siddharth Tiwari, the Bank for International Settlements' chief representative for Asia and the Pacific, said during the session titled "The First 100 Days: Biden's early policies and their impact on Asia."

Tiwari gave Biden a grade of A for his initial months in office. Richard McGregor, senior fellow at Australia's Lowy Institute think tank, handed out a B+, lauding the new administration's bold and organized first steps but saying much hinges on U.S. economic performance.

"Unless the U.S. economy recovers, then I think the U.S. diplomacy won't be able to recover from the Trump era," he said. The more "economically confident" the U.S. becomes, he explained, the more confident it will be in its trade policy -- potentially opening doors for bigger moves like rejoining the reconfigured Trans-Pacific Partnership trade pact. U.S. President Joe Biden has earned high marks from an FT-Nikkei panel of experts for his first 100 days in office.   © Reuters

The signs certainly point to a rebound for the American economy: The International Monetary Fund now projects U.S. gross domestic product will grow 6.4% in 2021 and 3.5% in 2022. "The U.S. is projected by the middle of this year to reach levels of pre-pandemic," getting the world's largest economy "firing on all cylinders," Tiwari said. "Combine this with the robust growth in China, this will strongly drive Asian growth."

Putting wind in America's sails are the Biden administration's various stimulus measures, such as a $1.9 trillion coronavirus relief package and over $2 trillion in infrastructure investment pledged over the next eight years. These initiatives are significant, said Takehiko Nakao, chairman of the Mizuho Research Institute and a former chief of the Asian Development Bank.

Despite the heavy spending, Nakao said Biden is mindful of fiscal responsibility and addressing inequality as well, pointing to a proposal for a global minimum tax to stop companies from shifting profits to tax havens. Nakao said this is "not just about finance but also about equity, and how to be fair to the society."

Bringing a corporate perspective to the discussion, Eriko Asai, president of GE Japan, said businesses applaud Biden's commitment to climate change and re-entering the Paris accord. With Biden due to host Japanese Prime Minister Yoshihide Suga in Washington later this week, she expressed hope for "greater U.S.-Japan partnerships in breakthrough technology, including offshore wind, hydrogen and grid modernization."

She added that the collaborations could extend to policy and regulation, resilient supply chains and cooperation on infrastructure financing.

But while the panelists largely like what they see from Biden, there was palpable unease about the tense state of U.S.-China relations. Some appreciated the White House's continued firm stance more than others, but there was broad agreement that China's economy remains critical for Asia's future growth.

"I think it's very clear that [the U.S.] cannot accept the change in the existing international order, but at the same time, it's not good to totally separate America from China and China from others by [drawing a line between] the authoritarian regime and democratic regime," Nakao said. "If we do that, there is no [room for] compromise."

McGregor was more positive about Biden's hard line on China, especially when it comes to supporting Australia through the punitive trade measures Beijing imposed last year. He said he was "pleasantly surprised" by the clarity of U.S. foreign policy under Biden.

A second panel picked up where the first left off, focusing on geopolitics and delving into the U.S.-China tensions.

Tommy Koh, chairman of the governing board at the Centre for International Law at the National University of Singapore, called the Sino-American ties the most important bilateral relationship today and warned against "demonizing" China. 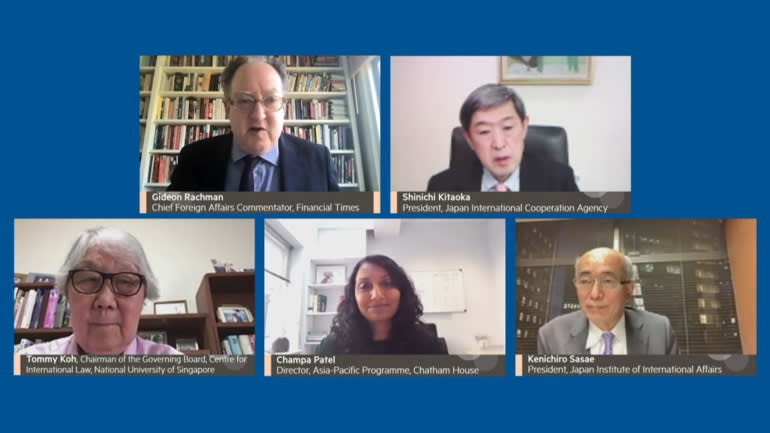 While the recent Alaska summit between U.S. and Chinese officials made headlines for the harsh tone from both sides, Koh said it was important for the two to stake their positions in their first encounter. Echoing U.S. Secretary of State Antony Blinken, he said the bottom line is that "the U.S. will cooperate with China where their interests intersect, like climate change, and they will compete when their interests diverge."

But Kenichiro Sasae, president of the Japan Institute of International Affairs, saw something bigger in the Alaska meeting: "the beginning of a new dimension to the hegemonic rivalry."

In Sasae's view, the meeting demonstrated a new conflict over "how you govern" a country. And he argued that for Japan, it is generally "good for the U.S. to continue to be tough" on China, since the U.S. is the only country which could counter China's assertiveness in the South China Sea, around the Japan-controlled Senkaku Islands and Taiwan.

Shinichi Kitaoka, president of the Japan International Cooperation Agency, suggested Biden and Suga will find plenty of common ground, but also stressed that it is important for Japan to maintain some differences in its approach. While the U.S. is geographically distant, after all, Japan is right next door to China and needs to avoid a real confrontation.

Since Trump embarked on his trade war with China, many analysts have likened the tensions between the powers to a new Cold War, dividing the world into two competing ideologies. But Champa Patel, director of the Asia-Pacific program at Chatham House, said "the Cold War analogy is a false one."

Patel emphasized that China is an "integral part of the world economy" and that "countries in the region are hugely reliant on China."

"What they want to do," she said, "is to hedge and balance in a way that preserves their economic interests but gives them greater security."