China hits back at Japan-US statement that names Taiwan 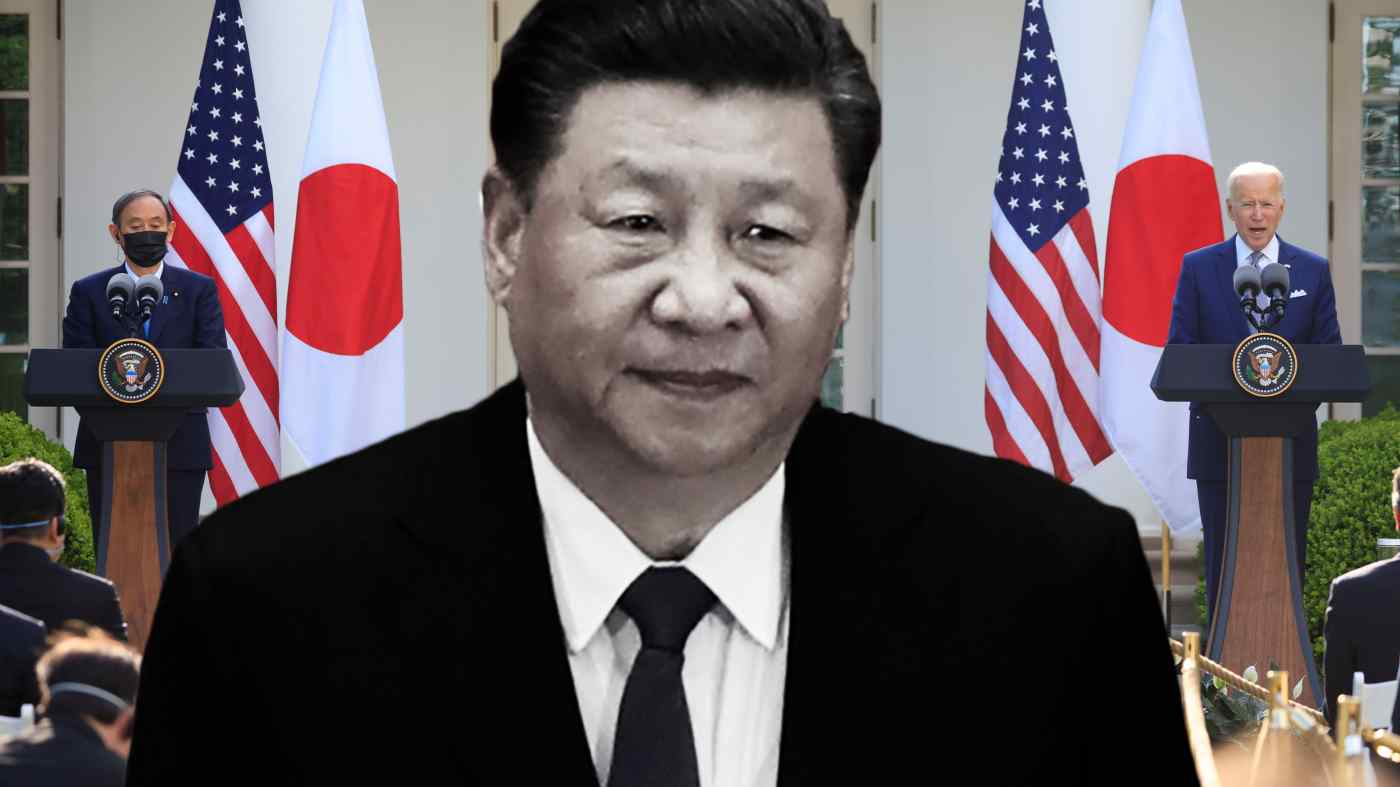 TOKYO -- Hours after Japan and the U.S. named Taiwan in a leader's summit statement for the first time in more than five decades, China hit back at the communique that also highlighted the two allies' concerns over Hong Kong and human rights issues in Xinjiang.

"These matters bear on China's fundamental interests and allow no interference. We express strong concern and firm opposition to relevant comments in the Joint Leaders' Statement," a spokesperson at the Chinese embassy said in a statement on Saturday.

"These comments have gone far beyond the scope of normal development of bilateral relations," the embassy added. "The scheme of the U.S. and Japan goes against the trend of the times and the will of people in the region. Though it is designed to undermine others, it will only end up hurting themselves."

After their summit in Washington on Friday, Japanese Prime Minister Yoshihide Suga and U.S. President Joe Biden released a statement that referred to Taiwan, saying, "We underscore the importance of peace and stability across the Taiwan Strait and encourage the peaceful resolution of cross-Strait issues."

The last time Japan and the U.S. mentioned the island in such a statement was in 1969 after a summit between then Japanese Prime Minister Sato Eisaku and U.S. President Richard Nixon. This was before both countries normalized diplomatic ties with China in the 1970s.

Suga and Biden "shared their concerns over Chinese activities that are inconsistent with the international rules-based order, including the use of economic and other forms of coercion," the statement said.

"We oppose any unilateral attempts to change the status quo in the East China Sea," the statement said, in apparent reference to the uninhabited Senkaku Islands that lie close to Taiwan. The islets, known as Diaoyu in China, are administered by Japan but claimed by China, which has frequently sent vessels into nearby waters.

Taiwan is very sensitive issue for China, whose ruling Communist Party claims as its territory despite having never ruled it. Washington is required by U.S. law to provide the island with the means to defend itself, despite not recognizing Taiwan as a country.

Biden this week dispatched an unofficial delegation, including former Deputy Secretaries of State Richard Armitage and James Steinberg, as a sign of his commitment to the island. The visit came days after 25 Chinese warplanes entered Taiwan's air defense identification zone, the latest in a series of aerial incursions by China.

The Chinese Communist Party-affiliated Global Times newspaper also attacked the Japan-U.S. statement in an editorial, saying it is time for the two countries to behave in a "responsible manner."

"It seems the sole aim for the U.S. and Japan to reinforce their decades-old alliance under the new U.S. administration is to redirect it against China, a signal the two countries should have avoided to send as it brims with a Cold War mentality and ideological bias," the paper wrote.

"Both the U.S. and Japan should behave in a more constructive and responsible manner," it added. "Their anti-China collusion would only produce a lose-lose outcome, which will benefit no one's interests, let alone contribute to regional peace and stability."

Meanwhile, Taiwan welcomed the Suga-Biden statement, with its foreign ministry expressing "sincere gratitude" for the "recognition of the importance of peace and stability in the region across the Taiwan Strait."

"Taiwan, located in an important position in the first island chain, continues to play a key role in regional stability and prosperity and also shares the same feelings with regional countries over the threats and aggression via land, maritime and aerospace," the ministry said.

Taiwan's foreign ministry also tweeted: "We welcome the statement by @POTUS & @sugawitter in which they underscore the importance of peace & stability across the Taiwan Strait."

Mike Mochizuki, a political scientist at George Washington University, said that China's reaction to the statement was predictable.

"Just to mention the word 'Taiwan,' China's going to complain about it," Mochizuki said. "They complained about it in the two-plus-two statement in February 2005 when it said the two countries 'encourage the peaceful resolution of issues concerning the Taiwan Strait through dialogue.' China was very upset over that statement."

"If the statement had gone further, for example, if it had gone back to the 1969 Nixon-Sato Joint Statement, stating that 'the maintenance of peace and security in the Taiwan area was also a most important factor for the security of Japan,' that goes a little bit further and China might be even more upset."

Additional reporting by Cheng Ting-fang and Lauly Li in Taipei, and Ken Moriyasu in Washington