Chip shortage can't be used as leverage against us, Biden says NEW YORK -- U.S. President Joe Biden signed an executive order Wednesday aimed at securing supply chains of strategic industries, including semiconductors and rare-earth minerals, in which Washington would like to outcompete or cut dependence on China.

The executive order directs federal agencies to conduct a 100-day review of supply chain vulnerabilities of four products -- which also include active pharmaceutical ingredients and electric-vehicle batteries -- and to identify immediate steps that can be taken to address any gaps.

Biden's latest executive action comes as a global semiconductor shortage takes a heavy toll on automakers, with American giants such as Ford Motor and General Motors projecting billions in lost earnings this year due to reduced output.

Warning that ignoring the issue could have grave consequences, Biden said the recent chip shortfall underscored the need for the U.S. to "stop playing catch up."

"In some cases, building resilience will mean increasing our production of certain types of elements here at home; in others it will mean working more closely with our trusted friends and partners, nations that share our values so that our supply chains can't be used against us as leverage," Biden said before signing the executive order, in an apparent allusion to China's role in American supply chains. The U.S. also needs to identify and build surge capacity to prepare for times of emergency and invest in research and development, the president added.

Nikkei first reported the order on Tuesday. One aspect the Biden administration has highlighted is Washington's intention to work with like-minded partners and allies to build resilience in technology supply chains.

In the areas of semiconductors and EV batteries, this likely means working with Taiwan, Japan and South Korea. In rare-earth minerals, the U.S. has been teaming with Australia to challenge the dominance of China, from which America gets about 80% of its supplies.

"This work is not going to be about America going it alone," Sameera Fazili, deputy director of the National Economic Council, told reporters at a White House briefing prior to Biden's signing.

"The answer to these weaknesses is not always to be, 'ramp up domestic production,'" Fazili said, moving away from the previous administration's aggressive trade stances that rattled even allies.

While the review has yet to begin, "we're expecting we'll be using a mix of incentives to encourage production here, looking at ways to ensure there's surge capacity" but also "stockpiling, working with our allies and partners to make sure that we have cross-border open flows," Peter Harrell, the council's senior director for international economics and competitiveness, told reporters at the same briefing. 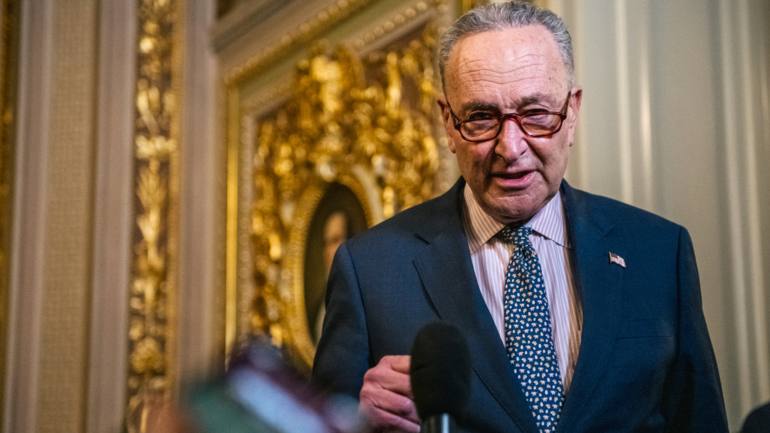 "We cannot let China get ahead of us in chip production," Senate Majority Leader Chuck Schumer warned.   © Reuters

Meanwhile on Capitol Hill, Senate Majority Leader Chuck Schumer told reporters Tuesday that he has directed relevant committee members of both parties to start drafting a legislative package that will involve making "serious investments" in strengthening the U.S. semiconductor industry "to outcompete China and stop depending on foreign sources."

"We cannot let China get ahead of us in chip production," Schumer said. "This will be part of the proposal that we will introduce."

The New York Democrat said the new legislation must enhance U.S. competitiveness against China by investing in American innovation, workers and manufacturing, as well as in strategic partners and alliances -- NATO, Southeast Asia and India.

Washington must "expose, curb, and end once and for all China's predatory practices which have hurt so many American jobs," he said.

The U.S. share of global semiconductor manufacturing capacity has plummeted to just 12% from 37% in 1990, according to Boston Consulting Group. Taiwan now tops the world's chip output, but Boston Consulting is forecasting China to lead in production by 2030 with a 24% share.