US and China start Alaska meeting with blunt words NEW YORK -- The first high-level U.S.-China meeting during President Joe Biden's presidency kicked off in Anchorage, Alaska, on Thursday, with both sides trading barbs from the outset.

The icy venue is far from the only indicator that relations between the world's two largest economies are unlikely to thaw anytime soon.

The American side will "discuss our deep concerns with actions by China, including in Xinjiang, Hong Kong, Taiwan, cyber attacks on the United States, economic coercion of our allies," Blinken said.

"Each of these actions threaten the rules-based order that maintains global stability," he said.

Yang, in turn, slammed the U.S. for using its "military force and financial hegemony to carry out long-arm jurisdiction and suppress other countries."

"It abuses so-called notions of national security to obstruct normal trade exchanges, and incite some countries to attack China," Yang said in a speech that lasted over 10 minutes, which was later relayed in English by an interpreter.

The top Chinese official also took a jab at America's fragile democracy and its own human rights records, pointing to police brutality and systemic racism that led to mass protests in the U.S. last summer.

The Global Times cited senior Chinese diplomats as saying that the U.S. seriously prolonged its opening remarks, attacked China's domestic and foreign policies, and provoked disputes. "It is not at all hospitable, nor does it conform to diplomatic etiquette, toward which China responded solemnly," the state-run newspaper said in a tweet. 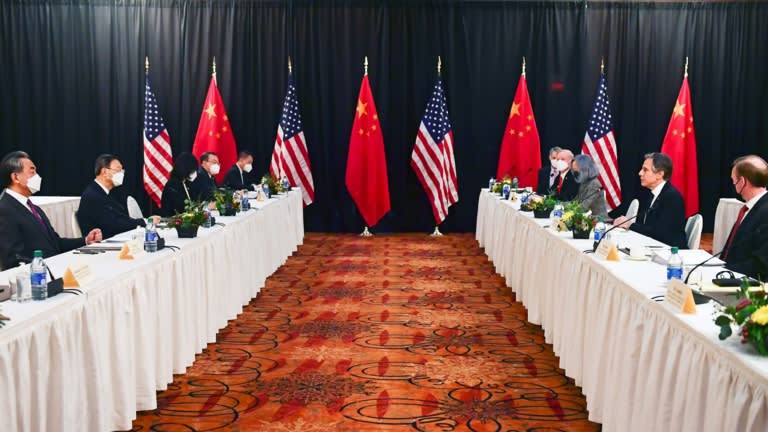 The U.S. and China delegations meet at the Captain Cook Hotel in Anchorage, Alaska on March 18.    © Reuters

Blinken joined the meeting straight from a trip to Japan and South Korea, two allies Washington sees as crucial in countering China's influence in the Indo-Pacific.

It is important for the U.S. and Japan "to make clear together that China cannot expect to act with impunity when it comes to its actions" in places ranging from the South China Sea to Taiwan, Blinken told Nikkei in a Wednesday interview, a day after he and Defense Secretary Lloyd Austin met for "two-plus-two" talks with Japanese counterparts Toshimitsu Motegi and Nobuo Kishi.

"We look forward to the opportunity to lay out in very clear terms for our Chinese counterparts, some of the concerns that we have about the actions they're taking," Blinken said about the two-day U.S.-China meeting in Alaska. Last week, the top American diplomat promised Congress that the U.S. side will not be making any concessions in this meeting.

Since Biden took office less than two months ago, the two countries have traded sharp rhetoric in public, each characterizing the other as a major -- if not the biggest -- destabilizer of global order.

"For quite some time, the United States has been willfully interfering in other countries' internal affairs in the name of democracy and human rights," Wang said at a news conference last week.

"This has created lots of trouble in the world and, in some cases, turbulence and conflict," the Chinese foreign minister continued. "It is important that the United States recognize this as soon as possible. Otherwise, the world will remain far from being a tranquil place."

He added that the Chinese people were "outraged" by the latest U.S. sanctions on Hong Kong. 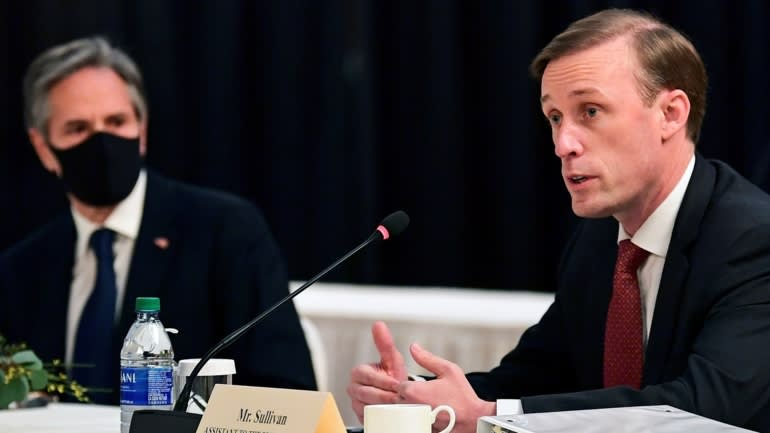 U.S. national security advisor Jake Sullivan speaks as Secretary of State Antony Blinken looks on, at the opening session of U.S.-China talks at the Captain Cook Hotel in Anchorage, Alaska on March 18.   © Reuters

The Biden administration, while saying it will work with China when it is in U.S. interests, has blasted Beijing for engaging in predatory economic practices, threatening a rules-based international order, and repressing universal human rights.

A U.S. senior official who briefed reporters Tuesday on the meeting promised the American side would be "delivering the same messages in private that you have heard from us in public."

"That includes making very clear our deep concerns about a range of issues, whether it's Xinjiang, Hong Kong, Chinese economic coercion of our allies and partners, China's increasingly aggressive activities across the Taiwan Strait," said the official, who also reiterated that the meeting is one-off and not the beginning of a larger dialogue process.

The Chinese side showed a similar posture. "When its core interests are involved, China has no room to back down," Cui Tiankai, China's ambassador to the United States, told reporters ahead of the meeting, according to an official transcript. "This position will also be clearly articulated in the dialogue." How it happened: Transcript of the US-China opening remarks in Alaska

Despite the war of words, Beijing has also publicly called for a reset of ties, and is reportedly seeking a summit between Biden and Chinese President Xi Jinping next month if talks are productive.

High on its wish list is for Washington to roll back some economic sanctions against China. At a February forum in Beijing on Sino-American relations, Foreign Minister Wang urged the U.S. to remove unreasonable tariffs on Chinese goods and "abandon irrational suppression of China's technological progress, so as to create necessary conditions for China-U.S. cooperation."

Analysts believe Beijing will press the Biden team on these two issues. "But Sullivan and Blinken are unlikely to engage," said Michael Hirson, who leads China coverage at political risk consultancy Eurasia Group.

"Economic officials won't be present, and the Biden team is reviewing its China policy," Hirson wrote in a Thursday note. "There is no appetite to make major moves on export controls or tariffs, particularly amid the current U.S. political environment."

Though the current White House has shifted away from former President Donald Trump's fiery, largely unilateral approach and added a focus on increasing America's own competitiveness, it has signaled no intention to reverse some its predecessor's most significant restrictions on Chinese tech.

The U.S. Department of Commerce this week subpoenaed Chinese companies to investigate whether they were complying with an executive order signed by Trump, which tightened export and investment controls in information and communications technologies citing security risks posed by "foreign adversaries" like China.

Also this week, the Federal Communications Commission said it was taking steps to strip two major Chinese carriers of the authorization to operate in the U.S. -- another legacy of the Trump administration's crackdown on China's tech companies.

In fact, neither side is prepared to table serious offers to reduce broader tensions, particularly on economic issues, according to Eurasia's Hirson.

And as Washington revitalizes its alliances in Europe and Asia, Beijing is working on a coalition of its own. Just days after attending the U.S.-China meeting in Alaska, Wang will host his Russian counterpart, Lavrov Sergey, on Monday and Tuesday.