US watches Japan's leadership race, hoping for a stable partner NEW YORK -- During U.S. President Joe Biden's eight years as vice president, Japan had five prime ministers. The party in power switched from the Liberal Democratic Party to the Democratic Party of Japan and then back to the LDP, depriving the U.S. and Japan of the opportunity to strengthen their alliance in any meaningful way.

So when Biden became president in January, one of the key decisions he made was to signal that Japan was the most important U.S. ally in the Indo-Pacific region -- and to treat Prime Minister Yoshihide Suga as such. China was seen as the principal strategic threat, and Japan was a crucial piece of the puzzle in forming a united front with allies against Beijing.

Suga was the first foreign leader to receive an invitation to the Biden White House. Secretary of State Antony Blinken, Defense Secretary Lloyd Austin and the new head of the U.S. Indo-Pacific Command, Adm. John Aquilino, all chose Japan as the destination for their first overseas trips.

Suga's announcement on Friday that he will not seek reelection in the LDP leadership race on Sept 29, in effect ending his tenure as Japan's prime minister, derailed Biden's efforts to prop up his unpopular partner in Tokyo. Biden and his Asia advisers, many who served in the Obama administration, had been trying to prevent Japan from returning to a carousel of prime ministers.

The abrupt end to Suga's year in power had Japan watchers in Washington scrambling for clues as to the implications for the Biden administration. Will the next Japanese leader have enough staying power to implement alliance initiatives? Is this the moment that Japan embraces a new generation of leaders? Are LDP leadership candidates Fumio Kishida, Taro Kono and Shigeru Ishiba tough enough to stand up to China? These are some of the questions that were circulating in the U.S. capital on Friday. Japan's former Foreign Minister Fumio Kishida waves after a debate organized by the Liberal Democratic Party, Youth Bureau and Women's Bureau at the LDP headquarters in Tokyo in September 2020.    © Reuters

"This is a blow," for Biden, said Michael Green, senior vice president for Asia and Japan chair at the Center for Strategic and International Studies. "The uncertainty in Japanese politics makes it very complicated for the Biden administration to implement its strategy, which depends heavily on the U.S.-Japan alliance."

One example Green raised was the in-person summit of the Quad, or Quadrilateral Security Dialogue, which brings together the U.S., Japan, India and Australia. A meeting had been planned for the end of September.

"Australia, the U.S. and India all agreed on the date for the Quad, but Tokyo could not agree because they didn't know when the LDP leadership election was, when the general election was, or if Suga could go. Coordination is difficult when there's political fluidity," Green said.

Sheila Smith, a senior fellow for Asia Pacific studies at the Council on Foreign Relations, said that now that the autumn will be consumed by Japanese domestic politics, it is inevitable that the diplomatic calendar will see a major reshuffle. That will include not only the Quad leaders summit but also the two-plus-two meeting of foreign affairs and defense chiefs, the second such meeting this year for the allies, who were supposed to discuss an increased security role for Japan in the Indo-Pacific theater.

Tobias Harris, a senior fellow at the Center for American Progress, said that regardless of who ultimately wins the LDP leadership contest, there is a foreign policy blueprint that all the candidates will follow. But he added that a government with a smaller majority will make it hard to adopt ambitious measures, such as adding strike capabilities to the Self-Defense Force. "That's going to be a harder political lift," he said. Then-Japanese Foreign Minister Taro Kono attends a meeting with his Russian counterpart Sergei Lavrov in Moscow in May 2019. Kono leads polls as the most popular candidate to succeed Prime Minister Yoshihide Suga.    © Reuters

The good news for Washington is that the candidates interested in running are all familiar faces. Kishida and Kono were foreign ministers. Kono and Ishiba were defense ministers. "If you want a prime minister with foreign and defense policy experience, you couldn't ask for a stronger lineup," Harris said.

Smith said that talking to people in Japan, there seemed to be a "consensus emerging" that Kono is the most popular choice among the public, and that a Prime Minister Kono would be somebody Washington could work with from Day One.

Derek Grossman, a senior defense analyst at the Rand Corp., is watching Kishida. "Fumio Kishida is increasingly concerned about China's growing assertiveness against Taiwan. If Kishida becomes the next prime minister, then the U.S.-Japan alliance is likely to continue solidifying around the need to pay close attention to developments in the [Taiwan] Strait, and to support each other militarily should the circumstances dictate," he said.

"Kishida, however, has been accused in the past of being too dovish on China, and so the verdict is still out on whether he will emphasize positive China-Japan relations over Taiwan, or vice versa," he added. "If the former, then China may have an opportunity to reset bilateral ties." Shigeru Ishiba, a former defense minister, gestures during a news conference on his participation to the LDP leadership election to choose successor of Prime Minister Shinzo Abe, in Tokyo in September 2020. Ishiba has been Abe's long-time rival.    © Reuters

But the candidates' popularity among the general public and their qualifications may not be the deciding factor in the LDP race. Many Washington analysts expect former Prime Minister Shinzo Abe to emerge as Japan's new kingmaker, replacing LDP Secretary-General Toshihiro Nikai, a key Suga ally.

Abe and his longtime deputy prime minister, Taro Aso, are the de facto leaders of the largest and second-largest LDP factions, respectively, and together they wield significant political muscle within the party. When Kishida announced that he would remove Nikai from the powerful secretary-general post if elected, he is thought to have been reflecting the wishes of Abe and Aso, who had seen Nikai as an obstacle.

Meanwhile, Kono belongs to the Aso faction, and the 80-year-old finance minister will decide whether the faction will stand behind its fellow member. That determination will certainly be made in concert with Abe. 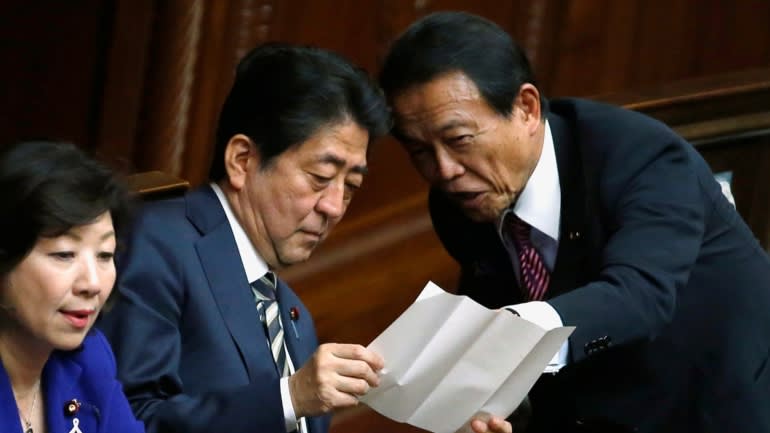 The kingmakers? Then-Prime Minister Shinzo Abe, left, talks with Deputy Prime Minister and Finance Minister Taro Aso at the Lower House of the Parliament in Tokyo in November 2017.   © Reuters

Green said that Abe holding sway in the LDP was a welcome development in Washington.

"It's a good thing for America whenever Abe has influence, because he's very strong on strategy, very strong on the alliance," said Green, a former senior director for Asia at the National Security Council under George W. Bush.

The LDP race and ensuing general election come at a time when many U.S. allies and partners are questioning Washington's commitment to defending its allies after its withdrawal from Afghanistan. In a series of speeches, Biden laid out the parameters of his foreign policy, which included no more nation building and no fighting indefinitely in a conflict not in America's national interest.

Smith said that she hopes the LDP race and the general election will spark a debate on Japan's foreign policy path, going forward.

"Japan's ability to operate on the global stage and the regional stage right now should be part of the people's calculus in choosing the next leader, because it is a moment where the future of Japan depends on it," she said.