U.S. president says he hopes for Quad summit in Japan around May 24 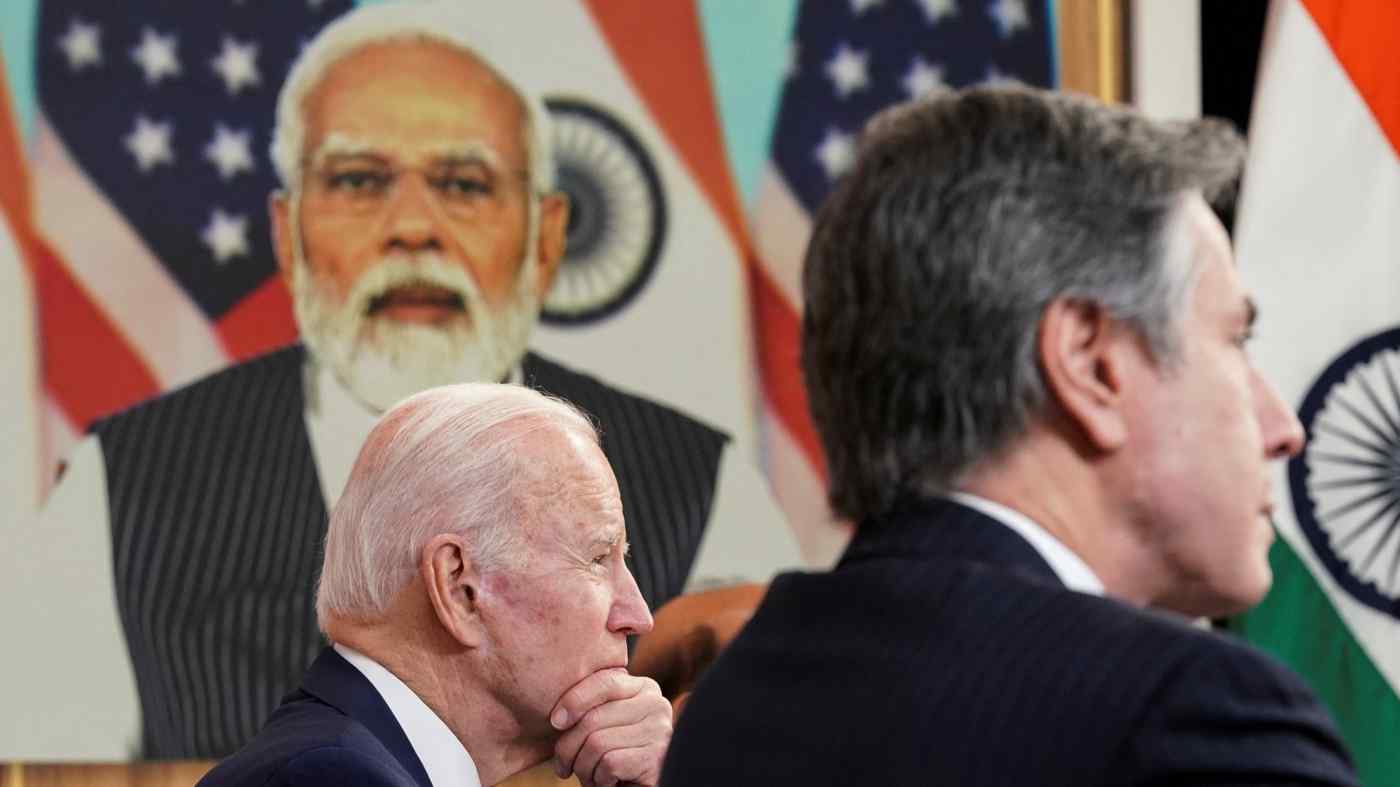 During the online meeting, Biden also suggested that members of the Quadrilateral Security Dialogue would hold a summit in Japan "on around the 24th of May." If the in-person Quad summit takes place, it would be Biden's first trip to Japan since taking office in 2021. The Indo-Pacific grouping consists of the U.S., India, Japan and Australia.

"The United States and India are going to continue our close consultation on how to manage the destabilizing effects of this Russian war," Biden said at the beginning of the meeting.

"The president conveyed very clearly" that it is not in India's interest to increase oil imports from Russia, White House press secretary Jen Psaki told reporters after the meeting.

India sources 10% of its crude imports from the U.S. and 1%-2% from Russia, according to Psaki.

Biden explained the impact of U.S. and European sanctions on Russia to Modi and offered to help India diversify its oil imports.

The U.S. and Europe have announced plans to slash energy imports from Russia over the invasion of Ukraine. Moscow responded by urging India to buy its crude at a cheaper price. India has purchased at least 13 million barrels of Russian crude since the invasion began in late February, Reuters reports.

"Recently, the news of the killings of innocent civilians in the city of Bucha was very worrying," Modi said during a brief portion of the meeting open to reporters. "We immediately condemned it and have asked for an independent probe."

Modi added that he spoke with the leaders of Russia and Ukraine.

"I not only appealed for peace, but also suggested [Russian President Vladimir] Putin have direct talks with the president of Ukraine," he said.

"The two leaders had an extensive exchange of views on several regional and global issues, such as the COVID-19 pandemic, global economic recovery, climate action, recent developments in South Asia and the Indo-Pacific region, and the situation in Ukraine," the Indian government said in a statement.

As Biden met virtually with Modi, Indian Minister of External Affairs S. Jaishankar and Defense Minister Rajnath Singh were in Washington for a "two-plus-two" summit with U.S. counterparts Antony Blinken and Lloyd Austin. By deepening defense cooperation between the U.S. and India, Washington seeks to drive a wedge between Moscow and New Delhi.

A joint statement issued after the two-plus-two meeting said the participants reviewed mutual efforts to respond to the humanitarian crisis in Ukraine and assessed its broader implications. "They urged an immediate cessation of hostilities," it said, adding the ministers unequivocally condemned civilian deaths.

The statement noted that the global order has been built on the United Nations Charter as well as respect for international law and the sovereignty of states. Looking ahead to the planned Quad summit in Tokyo, the ministers reaffirmed their commitment to "a free and open Indo-Pacific in which the sovereignty and territorial integrity of all states are respected, and countries are free from military, economic and political coercion."

The ministers covered plenty of ground, according to the statement, which also touched on issues such as Afghanistan, Myanmar, climate change, the COVID-19 pandemic and resilient supply chains.