Blinken presses South Korea to work with Japan in Indo-Pacific 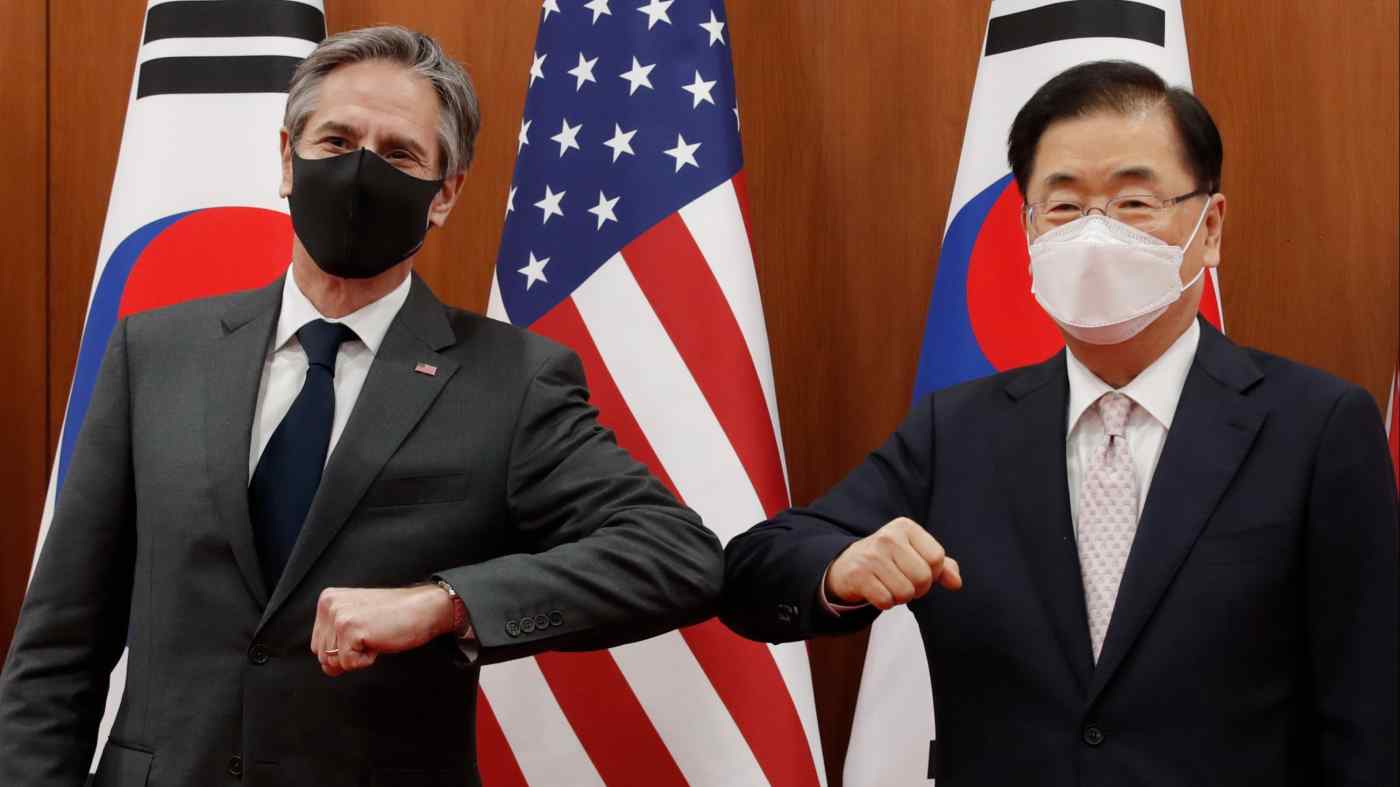 SEOUL/WASHINGTON -- U.S. Secretary of State Antony Blinken on Wednesday stressed the importance of trilateral cooperation among the U.S., Japan, and South Korea "in ensuring a free and open Indo-Pacific," in a meeting with South Korea's Foreign Minister Chung Eui-yong in Seoul.

Agreeing that the U.S.-South Korea alliance is the "linchpin" of peace, security, and prosperity in the Indo-Pacific, the secretary and the foreign minister confirmed that North Korean nuclear and ballistic missile issues are a priority.

The top American diplomat also accused North Korea of "systemic and widespread abuses" committed against its citizens, showing a tough stance toward the reclusive state.

Blinken and U.S. Secretary of Defense Lloyd Austin arrived in Seoul after a stop in Japan as part of a diplomatic tour of the region. Blinken and Austin are due to meet their South Korean counterparts Thursday in the first two-plus-two meeting between the two countries since 2016.

A visit to Seoul so early in the administration "clearly shows the new U.S. administration's emphasis on its allies," Chung said at the start of the meeting.

"President Moon Jae-in also appreciates the direction of Korea-U.S. relations since the inauguration of the Biden-Harris administration. Particularly, the president highly appreciates that we are holding the foreign and defense ministers' meeting for the first time in five years," he said.

Blinken told Chung that the U.S. side wants to further deepen cooperation in the Indo-Pacific, which the Biden administration has placed at the heart of its foreign policy.

"Secretary Austin and I are here to reaffirm the United States' commitment to the alliance but also to build on it with you. We want to achieve our shared vision of a free and open Indo-Pacific, anchored by respect for human rights, for democracy, for the rule of law," he said. 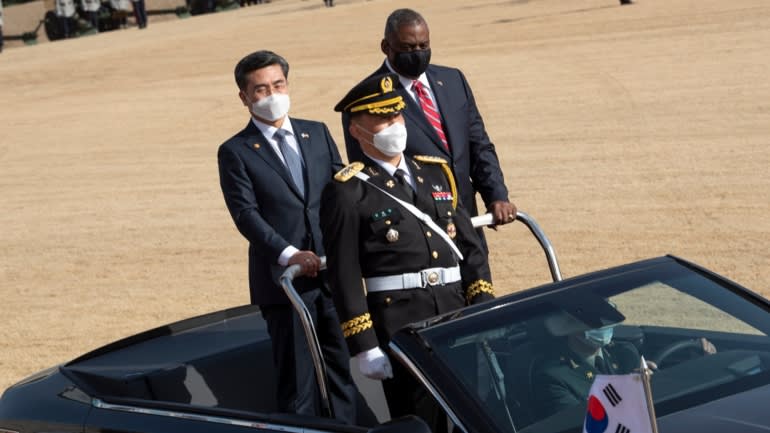 U.S. Secretary of Defense Lloyd Austin is honored in a welcome ceremony hosted by South Korean Defense Minister Suh Wook in Seoul on March 17. (Photo courtesy of the Department of Defense)

Seoul has distanced itself from the "free and open Indo-Pacific" concept pursued by Washington and Tokyo, as well as the Quad grouping of the U.S., Japan, India and Australia, in part not wanting to burn bridges with Beijing. South Korea's relationship with Japan has soured in the past several years due to historical issues.

But the U.S. believes that restoring the three-way partnership between Washington, Tokyo and Seoul will be crucial to its Indo-Pacific blueprint, and Blinken emphasized the issue.

A State Department fact sheet updated after Wednesday's meeting, noted that "a robust and effective trilateral relationship" between the U.S., South Korea and Japan "is critical for our joint security and interests in defending freedom and democracy, upholding human rights, championing women's empowerment, combating climate change, promoting regional and global peace, security, and the rule of law in the Indo-Pacific and across the globe."

At the meeting, Blinken said, "The authoritarian regime in North Korea continues to commit systemic and widespread abuses against its own people."

"We must stand for fundamental rights and freedoms and against those who oppress it," he said.

The hard-line stance could provoke North Korea into carrying out missile testing for other forms of provocation, observers say.

The Biden White House is in the process of conducting a wholesale review of the North Korea policy. The review includes an "evaluation of all available options to address the increasing threat posed by North Korea," Blinken told a news conference in Tokyo on Tuesday.

Since February, the U.S. has attempted to reach out to North Korea through several channels, hoping to establish a line of dialogue with the regime.

In the meeting with Chung, Blinken touched on China as well, calling for solidarity among nations that share democratic values.

"Given the unprecedented challenges posed by both the Democratic People's Republic of Korea and China, the U.S.-ROK alliance has never been more important," said Austin, using the acronym for South Korea's official name, the Republic of Korea. The defense secretary pledged "extended deterrence" to protect South Korea from the nuclear threat.

North Korea broke its silence toward the Biden administration Tuesday when Kim Yo Jong, the younger sister of the regime's leader Kim Jong Un, spoke out against the joint exercise being conducted by U.S. and South Korean forces through Thursday.

"If [the new U.S. administration] wants to sleep in peace for the coming four years, it had better refrain from causing a stink at its first step," the younger Kim said, hinting that the regime is prepared to abandon the inter-Korean military agreement.

During a seldom-held congress opened by the ruling party in January, Kim Jong Un pledged to expand the North's nuclear capabilities, casting the U.S. as the "greatest enemy" to the nation. Experts believe that the regime is intentionally heightening tensions to draw the attention of the Biden administration.

The same day, CNN reported an analysis by the U.S. intelligence community shows the North is likely preparing to conduct a missile or rocket engine test. Administration officials are discussing how to publicly respond if a test does take place, according to the report.