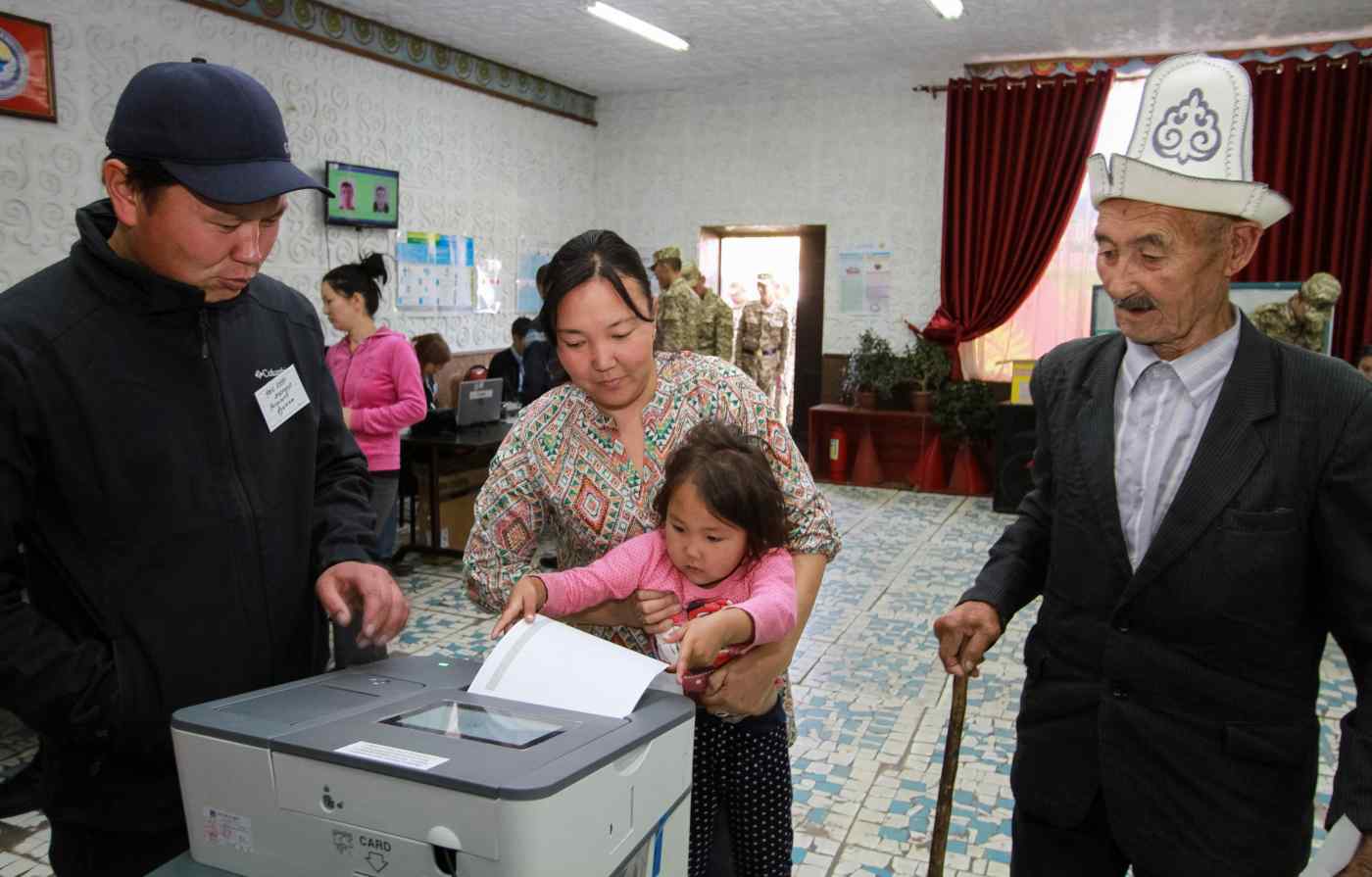 People cast their ballots in the presidential election in Kyrgyzstan Oct. 15. This was the first instance of a non-violent, democratic transfer of power in the country.   © Reuters
EIJI FURUKAWA, Nikkei staff writerOctober 21, 2017 18:15 JST | Mongolia, Central Asia, Afghanistan
CopyCopied

MOSCOW -- China and Russia may be competing for influence in Central Asia, but neither will be disappointed with the outcome of Kyrgyzstan's recent presidential election.

Calls for unity from defeated opposition leader Omurbek Babanov will also have been met with sighs of relief in Moscow and Beijing as the Central Asian republic is no stranger to chaotic and violent power-grabs. Sooronbai Jeenbekov, left, won the election having campaigned, much like all the main candidates, on a pro-Moscow ticket.   © Reuters

Sitting at the crossroads between Europe and China, Central Asia is pivotal to Chinese President Xi Jinping's Belt and Road initiative.

Stability in the region is crucial for Beijing after having invested heavily in natural resource development and drawn up plans to build logistics infrastructure. In a congratulatory message, President Xi Jinping said China is ready to work with Kyrgyzstan and take the opportunity of co-building the "Belt and Road" to deepen cooperation in various areas.

China is intent on building an ambitious railway project starting in Kashgar, in the Xinjiang Uygur Autonomous Region, and running through Kyrgyzstan to Uzbekistan. The line could provide a huge boost for trade between the three countries.

Being a far smaller economic power, Russia aims to exercise leadership in terms of regional security. Moscow is in talks with Bishkek over expanding its air base in Kyrgyzstan. That sits well with Beijing, which is apparently reluctant to take the lead on security, and many analysts believe the two powers will be able to strike a balance that suits all parties.

Observers from the Organization for Security and Co-operation in Europe pointed out instances of misuse of public resources and vote-buying, but concluded that the election had "contributed to the strengthening of democratic institutions by providing for an orderly transfer of power from one elected president to another."

Denis Berdakov, a member of the Expert Council, an advisory panel to the president, said this is the first election to have been held with little outside interference, even from Russia, not that there are likely to be many complaints in the Kremlin.

All the main candidates had campaigned on a pro-Moscow ticket and agreed on the importance of the Russia-led Eurasian Economic Union.

Babanov, a businessman and head of the Respublika party, said before the election that 80% of the Kyrgyz people hoped for stronger ties with Russia, indicating that the pro-Russian policies of outgoing president Almazbek Atambayev were set to continue.

Russian President Vladimir Putin called to congratulate Jeenbekov a day after the election.

Viewing former Soviet republics as falling very much within its sphere of influence, Moscow has often intervened in their politics.

Propaganda through Russian media used to be inescapable in Kyrgyzstan, but that changed in 2014, when Moscow sent troops into Ukraine after the fall of the pro-Russian government of Viktor Yanukovych.

The intervention put other former Soviet states on edge and apparently led Moscow to tone down its interference in places like Central Asia. The only hint of outside influence during this election was an invitation for a meeting from Kazakh President Nursultan Nazarbayev to Babanov in September. His intentions remain unknown, but the ruling party took full advantage, accusing the opposition candidate of representing foreign interests. His support rate then tumbled.

Kyrgyz voters have good reason to be wary of interference from outside powers. When mass uprisings ousted President Askar Akaev in 2005, the U.S. and Russia, both of which have air bases in the country, tried to bring gain the upper hand.

Then-U.S. President George W. Bush trumpeted the spread of democracy and clashed with Moscow over various parts of the former Soviet Union.

Foreign influence is said to have had a hand in mass demonstrations that forced President Kurmanbek Bakiev into exile in 2010. Bakiev reportedly drew Russia' ire by stalling on a promise to close the U.S. base. Speculation was rife that Russia, China and Kazakhstan had forged a secret pact to get rid of him.

Roza Otunbayeva, who served as interim president in the aftermath, told The Nikkei that she had asked then-Russian President Dmitry Medvedev to intervene in the ensuing turmoil but was turned down.