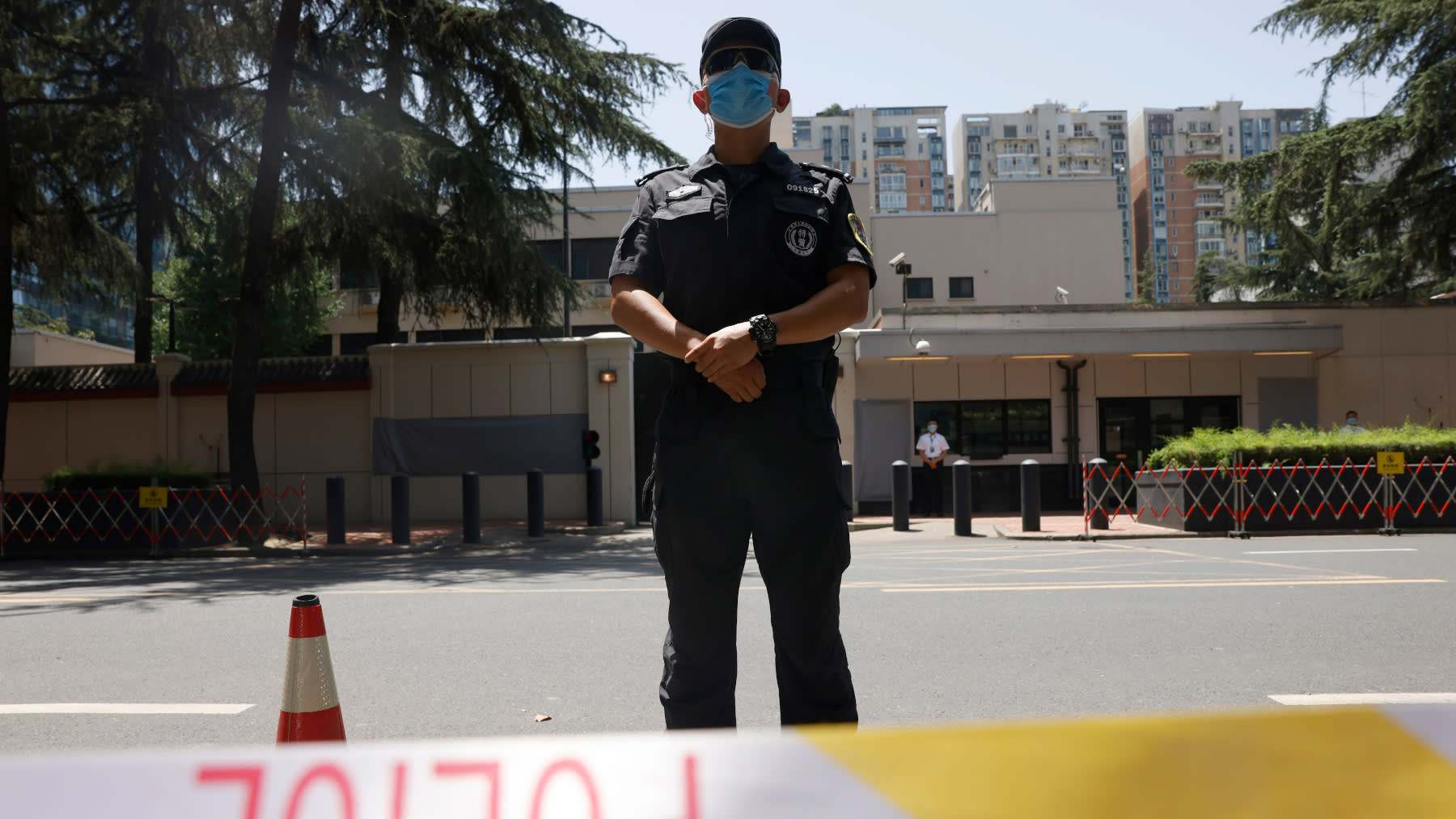 NEW YORK -- The American flag was taken down in the courtyard of the U.S. Consulate in the Chinese city of Chengdu on Monday, with the facility shut down around 10 a.m. local time.

Soon thereafter, Chinese officials walked in the front entrance to seize materials left behind. The street in front of the building was packed with reporters, locals and other bystanders.

But Pompeo's speech and the overall direction of the Trump administration's China policy have come under fire, even from foreign policy experts who served in the previous Republican administration under President George W. Bush.

Richard Haass, who served as director of policy planning at the State Department and a principal adviser to then-Secretary of State Colin Powell, slammed the speech as a "misrepresentation of history" in a Washington Post opinion piece this weekend.

Haass rejected Pompeo's claim that the U.S. had essentially nothing to show for 50 years of "blind engagement" with Beijing, writing that then-President Richard Nixon and his national security adviser, Henry Kissinger, largely succeeded in what they sought to achieve in opening relations with China.

Nixon and Kissinger aimed "to use China as a counterweight to the Soviet Union and shape China's foreign policy, not its internal nature," argued Haass, who is now president of the Council on Foreign Relations.

Cementing China's split from the Soviet Union gave the U.S. leverage that contributed to the end of the Cold War, he wrote.

"It is not within our power to determine China's future, much less transform it," Haass said in his piece.

China's many challenges, including an aging society, an inadequate public health system, an unsustainable economic model and the Communist Party's role, "will be for the Chinese people and their leaders to determine," he wrote. U.S. Secretary of State Mike Pompeo delivers a speech on "Communist China and the Free World's Future" at the Richard Nixon Presidential Library and Museum in Yorba Linda, California, on July 23. (Photo courtesy of the State Department)

Christopher Hill, a former assistant secretary of state for East Asian and Pacific affairs in the Bush administration, tweeted Saturday that "Fear and loathing of China is no substitute for self-confidence and unity of purpose."

Hill, now a diplomacy professor at the University of Denver, also tweeted a Foreign Affairs piece posted May 11 in which he compared Newtonian laws to foreign policy. "Every action does indeed lead to an equal and opposite reaction," he wrote. "Rarely does the receiver of the action simply turn the other cheek and carry on."

"U.S. foreign policy under Trump and his dyspeptic secretary of state, Mike Pompeo, aims less to broaden coalitions and forge effective policy than simply to marshal fear by ascribing malicious motives to a country that is more likely trying to protect what it has," Hill argued in language partly repeated in his tweet. "The administration has made little effort to chart a way forward with a China that will neither disappear nor give in to diktats from the United States."

Ex-diplomat Robert Daly, director of the Wilson Center's Kissinger Institute on China and the United States, took issue with the tit-for-tat closing of diplomatic missions in an interview on public radio Friday.

"If we keep closing missions, we're heading toward the dissolution of U.S.-China formal diplomatic relations," he said.

"We already have a nascent arms race between the United States and China," Daly said. "If we no longer have diplomatic relations, there will be a high degree of mutual alienation. ... We're going to see the resurrection of mutual assured destruction -- and the new arms race, unlike the previous one, would comprise not only nuclear weapons, but cyberweapons and the weaponization of outer space as well," he warned.

"It isn't really clear what state of relations between the United States and China they are aiming at," Daly said of the Trump administration. "They seem to be testing China to see how much confrontation and offensive language they can get away with, but it's not clear what the endgame is."

Most worrisome, Daly said, is that "the Trump administration has not leveled with the American people about what costs will be incurred, what sacrifices will have to be made, if we're involved in a long-term, global competition with the most populous nation on Earth that will soon also be the wealthiest. This is going to entail real sacrifice and real changes in the United States. ... And they haven't leveled on that."

Washington and Beijing are pointing fingers at each other. "The U.S. is responsible for all this," Chinese Foreign Ministry spokesperson Wang Wenbin told reporters Monday.

The U.S. State Department said that it is "disappointed by the Chinese Communist Party's decision," according to The Associated Press.

On the Chinese side, meanwhile, there seems to be an effort to avoid criticizing Trump himself and instead attack individuals below him carrying out the policies.

An influential commentary column this week in the People's Daily, the Communist Party's official mouthpiece, accused Pompeo of spreading distorted history in Thursday's speech and pinned the recent escalation of rhetoric from Washington on "certain U.S. politicians."

This reflects the dilemma Beijing faces in how to respond to Washington turning up the pressure. The piece declared that any attempts to turn back history against the wishes of people in both countries would not succeed.

By keeping the scope of its criticism relatively narrow, rather than attacking Washington more broadly, the piece seems intended to keep bilateral ties from deteriorating further.

Daniel Russel, former assistant secretary of state for East Asian and Pacific affairs in the Obama administration, said the reason such attacks are directed at Pompeo "is the same reason Pompeo is doing all of the denunciation and attacks against China instead of Trump."

"This is Trump's modus operandi -- he's using his attack dog to savage his opponent while trying to maintain an illusion of amity and friendship with the leader," said Russel, now vice president for international security and diplomacy at the New York-based Asia Society Policy Institute, in an interview with the Nikkei Asian Review. "The sheer virulence and hostility of Pompeo's rhetoric is something that the Chinese clearly resent, and he has become the focal point of broad public anger at the United States," he said.

In the meantime, "the Chinese game plan is to find some intermediate response that on the one hand shows the Chinese people that the party is standing up for themselves and not being pushed around" but avoids triggering more escalation or retaliation, Russel said.

"I think the Chinese leadership by and large is playing for time," he said. "They want to see the results of the U.S. election."