Assertive China and unpredictable US revive calls for tight-knit 'Anglosphere'

SINGAPORE -- When the clampdown on Hong Kong's anti-Beijing protesters intensified in June, the chairs of the foreign affairs committees of the Canadian, Australian, New Zealand and U.K. legislatures wrote to the United Nations secretary general asking for an envoy to monitor human rights in the Chinese city.

And in August, the foreign ministers of the four countries, along with U.S. Secretary of State Mike Pompeo, released a joint statement condemning Hong Kong's move to delay parliamentary elections.

The coordinated diplomacy was welcomed by advocates of "CANZUK" -- a proposed loose diplomatic and trading network connecting the four affluent Commonwealth realms, all of which share a common language and democratic norms but also the historical baggage of colonialism.

Calls for a grouping of so-called "Anglosphere" countries have persisted since at least the 1950s. But growing Chinese assertiveness, alongside the Donald Trump administration's unpredictable approach toward allies, have given the movement renewed momentum.

"If the U.S. is less likely [to play a major role in the Indo-Pacific], Australia needs to identify other allies," said James Paterson, an Australian senator of the center-right Liberal Party, who has been banned from entering China. "And the next best thing to a superpower is a big collection of like-minded smaller powers."

CANZUK is one in an alphabet soup of potential coalitions aiming to reshape the Indo-Pacific in an era of superpower competition. Some analysts expect a Joe Biden administration in the U.S. would rejoin the Comprehensive and Progressive Agreement for Trans-Pacific Partnership, which includes Canada, Australia and New Zealand, with Britain also looking to enter. China is part of the Regional Comprehensive Economic Partnership, a proposed free trade agreement that Australia and New Zealand support.

Japan, India and Australia agreed earlier this week to promote a "free and fair" trade initiative, inviting other nations to join them. The three nations and the U.S. will also meet later this year as part of the Quad, a maritime security forum that is seen as a counterweight to China.

Once derided as a fringe movement, there is also evidence of growing support for CANZUK. While the four nations and the U.S. have long shared intelligence as part of the Five Eyes network, cooperation has expanded to include meetings between finance and welfare ministers. Senior politicians in the main center-right parties of Britain, Canada and New Zealand have voiced support for the alliance and Canada's Conservatives recently elected a CANZUK proponent as leader.

Opinion polling in all four countries suggests broad support for increased cooperation between them, though what a CANZUK alliance would entail has not been strictly specified or scrutinized. Ambitions range from a superpower organization bound by NATO-like commitments, to more modest hopes of stepped-up trade and political exchanges. The USS John C. Stennis aircraft carrier in the South China Sea: Uncertainty over U.S. engagement with regional allies and concerns about China are driving calls for new alliances.   © Reuters

The absence of a detailed vision is a feature and not a bug, according to Matt Kilcoyne, deputy director of the Adam Smith Institute (ASI), a London pro-markets think tank close to Boris Johnson's government. "It is quite an Anglospheric trait not to want grands projets. CANZUK means it being slightly easier to get a job, to move and not to have to go through the rigmarole of being in a new state."

Paterson recently released a paper with the ASI calling for Australia and Britain to recognize each other's standards. That is a more radical step than usual free trade agreements, which require regulations to be harmonized. He also argued for a free movement compact based on Australia's expansive Trans Tasman Agreement with New Zealand.

Nonetheless, lasting alliances tend to be built on geographical proximity and economic ties, not political affinity. Plus, questions persist about the risks of mixed messaging to Asian allies and the relevance of a grouping of four small to midsize countries.

"Australia's future lies squarely in our part of the world. It's where we have to make our way and where we'll succeed and fail," said Michael Fullilove, executive director of the Lowy Institute, a Sydney-based think tank.

Fullilove did say that an Anglosphere alliance would be useful so long as its members resist shrinking their worldview to one focused on Western democracies. "Australia has a treaty alliance with the U.S., which doesn't restrict our ability to manage relationships in Asia. It adds to them."

A reinvigorated CANZUK grouping could help enhance the strategic autonomy of Indo-Pacific countries that seek to push back against China's coercive regional conduct but are not fully aligned with the Trump administration's Beijing policy, suggested Ali Wyne, an Indo-Pacific expert at the Atlantic Council in Washington, D.C.

New Zealand's key agricultural exports, for instance, are particularly subject to Chinese whims and Beijing is increasingly searching for substitutes to Australian iron ore. But "few of [America's allies], if any, have evinced a desire to engage in trade and technological decoupling as quickly or fully," Wyne added.

Despite the strategic possibilities, achieving political backing for CANZUK goals will be a challenge. Any major project will require cross-partisan support in all countries but thus far, no center-left parties have publicly joined the bandwagon.

Wellington and Canberra are also seeking to cut an advantageous trade deal with Britain, which is seen as a price taker now that a post-Brexit accord with the European Union looks increasingly remote.

"There's no desire to recreate the close economic relationship Australia and New Zealand had with Britain in the 1960s," said Sue Onslow, senior research fellow at the University of London's Institute of Commonwealth Studies, adding that the Kiwi economy underwent severe stress in the 1970s after Britain cut back on trading ties to join the European Common Market. "The negotiations will be hardheaded." 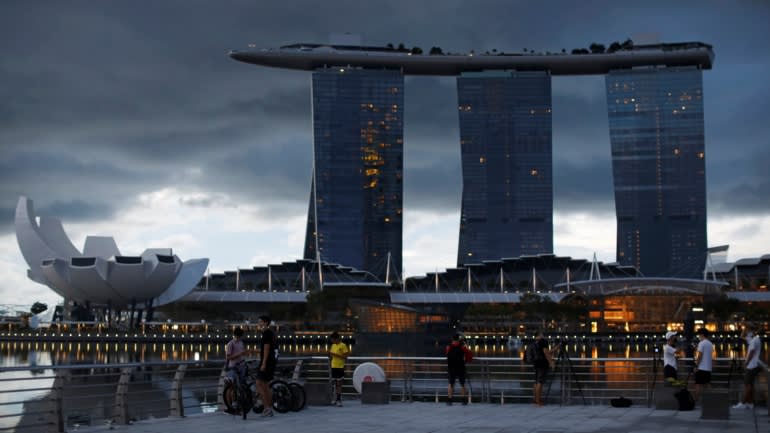 Many suggest the CANZUK idea should be expanded to include countries such as Singapore and India -- though it is unclear whether they would want to be a part of it.   © Reuters

While migration between English-speaking countries with comparable living standards generally has not been subject to populist attacks, that will likely remain on the back burner for a while. Post-Brexit Britain has signaled a preference for a "points-based system" where skilled immigrants are preferred over near-blanket free movement zones. And Canberra has explicitly ruled out expanding the Trans Tasman Agreement.

"The PM is right when he says this is something that can't be achieved overnight, but it should be something to be aspired to," Paterson said.

While the CANZUK nations are all significantly more diverse than they were 50 years ago, they will also have to deal with the questionable optics of three members being "white dominions," or onetime-British colonies that have a history of racism against Indigenous peoples and ethnic minorities.

Both Paterson and Kilcoyne say the door should remain open for prospective nonwhite-majority members like India and Singapore, a stance that reflects the position of many CANZUK advocates.

It is not clear if those countries would be particularly bothered either way: Singapore has repeatedly said it seeks to avoid choosing sides between the West and China, while Narendra Modi's government, which pulled out of RCEP, has been reluctant to commit to large trade pacts.

To avoid creating a negative image, Onslow said the CANZUK countries would have to work on persuading large portions of the public to buy in. "I fear it may come across as an exclusive club of middle-ranking powers who are better off," she said, "at a time when too many are going to be the 'have nots.'"